In an increasingly challenging global economy, business leaders are expressing collective concern about what the future will bring for their organisations.

There is a general lowering of business confidence, according to survey responses from 651 senior finance and corporate executives in 15 countries, representing large global companies with annual revenues of US$500 million or more. Conducted in November 2015 by American Express, the business leaders commented that while they were still positive about global growth, the level of optimism had declined — from 71% last year to 65% in 2016.

The American Express/CFO Research Global Business And Spending Monitor findings showed that the largest declines in confidence were evident among business leaders in China, Hong Kong and Singapore.

“Business leaders are citing possible changes to regulation and currency exchange rates as the most likely factors to slow their companies’ growth in 2016. While they are still planning to increase investment, the majority say they need to invest more just to remain competitive in 2016,” said Nigel Fox, Vice President and General Manager of Global Corporate Payments for Singapore, American Express. 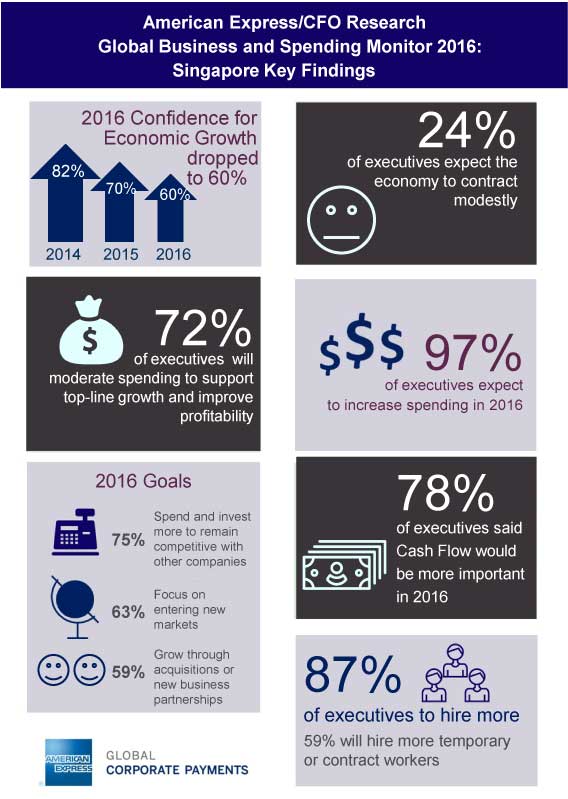 For some companies, this means the emphasis has shifted from new market strategies to shoring up their domestic businesses.

The top priorities of business leaders for 2016 are:

Despite this uncertain environment, 87% of Singapore business leaders still expect to increase their staff strength. But there will be adjustments made to their staffing strategy. Nearly 60% of those polled said they would use temporary or contract works, while around 40% would relocate overseas staff to domestic positions and rely on outsourcing.

While the leaders polled were less confident about the economic performance of their businesses, they recognise that without more investment, it would also be hard to stay competitive.