BACK IN the day, the circus served as an opportunity for the curious to see the bizarre, watch animals “perform” up close even though they had been brutalised into submission, be captivated by exotic acts of daring, and enjoy the ambience of the big top and the melange of aromas — sawdust mixed in with popcorn, excrement and excitement.

Connecting the various parts was the ringmaster with his cracking whip. And there were clowns, of course.

Before the advent of technology, this was, to some extent, a connection to the exotic world that lay just within reach of the masses’ fettered imagination.

There are some omissions in Circus 1903, a theatrical throwback to the circuses of old. There are no live animals, a result of the efforts of animal rights groups. Singapore has imposed a ban on animal circuses and animal acts since 2002. 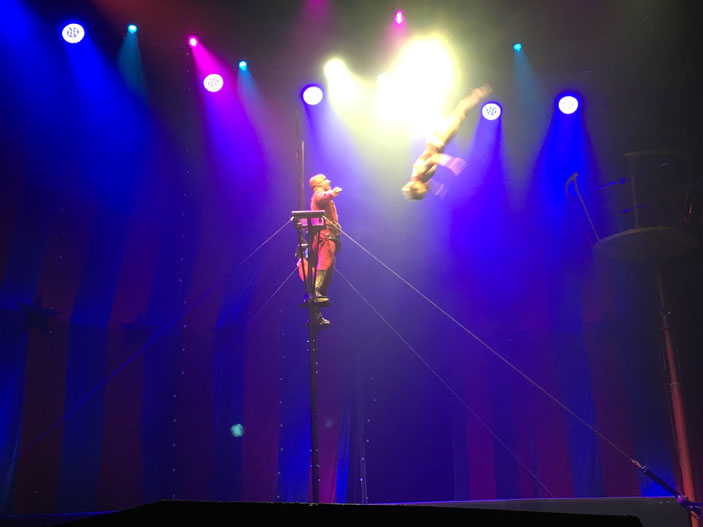 You aren’t seated in a big top with the tent and transient qualities that made the circus an event. Instead, you have the comfort of air-conditioned Marina Bay Sands and a modern theatre that uses lighting, audio and sets to good effect.

Those suffering from coulrophobia should be pleased to know that there are no clowns in Circus 1903.

And it’s no longer the only gig in town as it was at the turn of the previous century. In an era of constant distractions, it requires imagination and a compelling argument to draw today’s easily jaded audiences into an old-world experience.

And instead of their over-the-top slapstick humour, you get a more sophisticated brand of side-splitting laughs, delivered in large part by ringmaster, David Williamson.

Williamson can be intimidating as he towers over everyone, more so if you’re a three-year-old. But this gentle giant’s segment with four children plucked from the audience, and his quick wit and swift repartee proved vital in injecting large doses of humour into the 90-minute show.

But the producers’ ingenuity in getting around the animals conundrum has to be applauded.

Executive producers Andrew Spencer and Tim Lawson approached the puppet makers of War Horse, and after several rounds of toing and froing over two years the prototypes of the elephants Queenie and Peanut fit the bill.

The larger Queenie weighs 350kg and is manned by three, sometimes four people, in a combination of harnesses and stilts that turns in a realistic performance. The smaller Peanut scampers about the stage and serves to delight the children.

The expected circus fare of aerial acrobats, knife throwers, contortionists and jugglers is well curated globally, creating an environment that harks back to the early 1900s but injected with contemporary slickness.

Like many things that have vanished over the years, the circus seemed destined for a permanent exit. But with Circus 1903, some of that old magic and charm can continue to live on, a nostalgic distillation of an era that will be better received by today’s audiences.

The show cost “a couple of million dollars to stage and was probably not the most economically efficient” reckons Lawson. But the response has blown the top off the big top, so there must be some measure of satisfaction at that outlay of cash.