WHILE the property price index is on the rise, and en bloc sale frenzy continues to be  the hot topic, the figures don’t make sense as underlying issues point towards a troubled industry as the private housing rental index continues to drop and the HDB resale index continued to slide.

While looking for good news in the property market, the limelight was trained on the 4th quarter 2017 private residential data which climbed for two straight quarters after almost 4 years of decline that started in late 2013.

The media and most market pundits are cheering this little bright spot, and news about the en bloc sale frenzy continues to fan the flames of the hot housing market.

A weak employment market caused a loss of foreign workers which resulted in the small population growth. These foreigners who hold work permits, S-Passes and Employment Passes rent private residences, HDB flats and dormitories. Therefore, the drop in foreigner numbers is consistent with the gradual decline in the rental market.

The 2017 issues of labour reports from the Ministry of Manpower and the Business Expectations Survey for the Manufacturing Sector by the Economic Development Board point to similar trends.

The decline in our foreigner population was largely attributed to the fall in the number of work permit holders, especially in the construction, marine and offshore engineering sectors.

The services sector, including professional services and financial services also contributed to declines in foreigners, including the higher-salaried Employment Pass holders.

Other Articles Of Interest

WEF And Equality On The Same State?

Up to this point, the housing data made sense.

However, if we look at the population numbers versus the occupancy of our homes, the data becomes confusing.

The table below shows how our population growth was accommodated by the increase in the number of occupied homes. 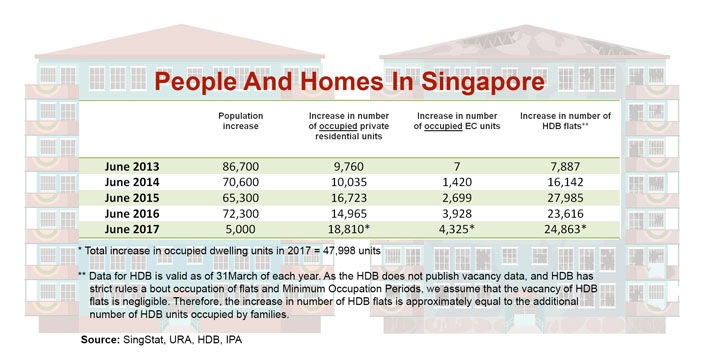 In the twelve month period to June 2013, the population increase of 86,700 was sufficiently accommodated by an increase of about 17,700 private residences, ECs and HDB flats combined.

However, in the year to June 2017, despite a low population growth of 5,000, the housing data shows that almost 48,000 more homes were occupied.

Some might argue that we are seeing a spike in new household formation leading to additional demand for homes. However, if real demand were so strong, why have rental prices continually declined since 2013 till now?

If the increase in 17,700 occupied homes in 2013 could account for a population increase of 86,700 people, who are the occupants of the 48,000 residential units in 2017 when the population increased by a mere 5,000?
Additional reporting by Tong You Xin. Illustration: Amit Kumar

Ku Swee Yong is a licensed real estate agent and the Co-Founder of HugProperty. His fifth book “Preparing for a Property Upturn” is available in all good bookstores. Tong You Xin is an undergraduate from the Department of Real Estate, National University of Singapore.

See also  A Glass Ceiling Over Your Head