The Elantra continues to raise the bar for Hyundai as it rolls out new models with enhanced features. By Kannan Chandran

As one of the world’s largest vehicle manufacturers, Hyundai has been keeping the masses contented with their ever-improving cars.

From the Pony that galloped onto the scene in 1975, and through various other models that rode a journey of highs and lows, Hyundai now finds itself in a position or relative strength and confidence. It has recently decided to get into the ring with the big boys, with the high-end Genesis, but in today’s market it’s still the mass-market Elantra that holds sway.

It’s understandable why the model has a growing following. Price points are more comfortable on the pocket, and for your buck you get a relatively large bang.

The Elantra Elite is shaped to appeal. The lines are well conceived and there is a presence about the car that delivers a sense of motion.

It’s certainly feature rich. Walk to the back of the car and the boot pops open if the key is in your pocket. Keyless entry lets you get underway without fishing in your purse or pocket for the key.

The cockpit is a bit plain with the broad expanse of plastic, but there are buttons aplenty. You can sync your mobile phone, individually set the temperature, plug in other electronic devices, and configure the car’s sound system and other interior settings. A multi-function steering wheel also lets you access what’s needed on the fly.

Electric seats and mirrors make for comfortable and safe driving, and while it may be a bit tight at the back, it’s not uncomfortable. A large boot allows you to carry more than a reasonable amount of stuff.

But, for me, the clincher are the seat cooling functions, which are normally found only in high-end models. Given the heat we’ve been enduring of late, there’s nothing like getting onto a cool seat. It’s like a gentle chill up and down your spine — but in a good way. 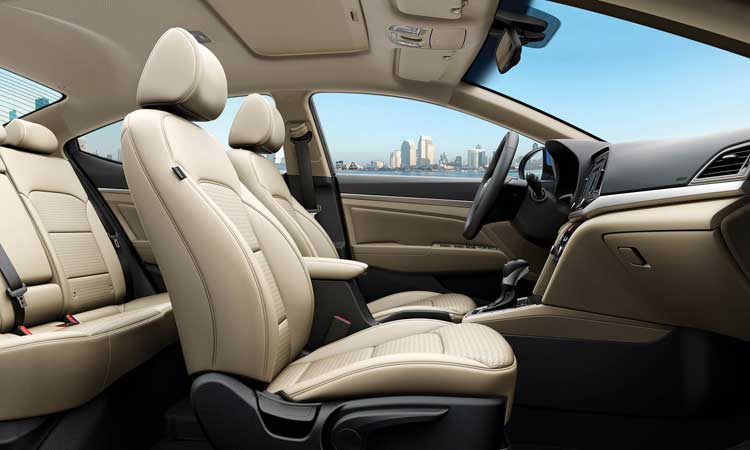 The 1.6 litre engine is not too powerful, but it’s been engineered to deliver what’s needed, when it’s required. The three drive modes — Sport, Eco and Normal are different enough that you can switch between them and feel the various effects on the car. In Sport, there’s a lot of desire expressed by the engine, though not necessarily a corresponding momentum. In normal drive, the Elantra gets things done just fine. Additionally, you can also switch to manual, where the six-speed has a bit more of a pull, though the shifts are smooth.

On the move, the Elantra is a good cruising car. The drive is easy, and there’s enough weight felt in the steering, which does become a tad vague at faster speeds. But that won’t take anything away from all the positive attributes to be enjoyed.