The Volkswagen Passat Variant bridges practicality with the information age by delivering loads of visual data. Can you handle it? By Kannan Chandran

In what some might consider a serious case of information overload, the Volkswagen Passat Variant delivers loads of data about the car.

The new Active Info display, which comes as standard, presents everything virtually, with dials resizing and changing the information on offer at the touch of a screen. That seems to give VW the green light to pile on the information. Initially, it is quite engaging, but human behaviour is such, after a while there will be a set number of things you’d like to see, and anything else should be an alert or a warning. That said, it’s good to have all that information within reach.

As estates go, the Passat Variant brings a good set of options together. Besides the information, there’s lots of room. The boot is spacious, even before you tip down the back row. There’s lots of leg and elbow room in the comfortable cabin. The panoramic roof adds to the sense of space when it’s open — though it takes a while to shut. In our climate, with not much to look up at, it’ll likely remain shut, anyway. The two-litre engine is turbocharged to deliver a responsive ride. Sprinting from standstill to 100kmh in just under seven seconds, its other specifications are quite impressive for a family sedan that will probably see more utilitarian rather than utopian ideals fulfilled.

Driving Modes
If you’d like to push it around for a bit of sport, you’ll have to contend with some nervousness as the engine wakes up with a surprised growl and gets to it. Offering a variety of driving modes, and coupled with the paddle shifts and the gearshift control at your disposal, it does give the Passat Variant a variety of handling characteristics. It would have been better if the Mode switch — located away from the driver beyond the gearshift — could have been reached quicker. 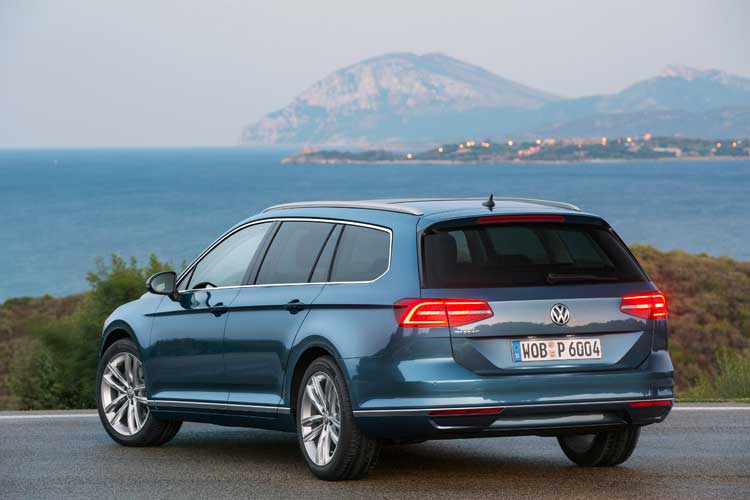 It would also have been better if the gear and speed indicators could have been centralized, rather than spread between two dials and reduced to small numbers. It’s understandable that when the navigation is on, that the map occupies the space between. But the directions are also shown on one of the round dials, and the centre touchscreen; all part of that information overload.

Again, this is about the price of progress, and takes some adjustment, which, ultimately, with familiarity, will make for a more comfortable experience (or you could ignore it…). The App-Connect feature is ideal for that seamless experience — from desktop to dashboard — as your main apps are called up and allows you to pump your music through the excellent DynAudio sound system. The extra space in the estate gives a little more room for the sound to become fuller, aided by the subwoofer planted in the space where you’d normally find your spare tyre.

The exterior and interior are dominated by metal strips that give a sense of breadth to the Passat. The details are appreciated, even if the metal is reflective and distracting when checking the driver’s side wing mirror. In keeping with the metallic flourishes, the new front LED headlights cast a bright light on the path ahead and the tail lamps tell their own story of stopping and turning.

See also  Touareg Offers Too Much Too Soon?