THE ADVANTAGE of travelling to Chiang Mai in the north of Thailand is that you get to your final destination relatively quickly.

Unlike many other resorts in the region, the journey from airport to resort is usually accomplished in less than 30 minutes, generally without too much traffic to navigate. 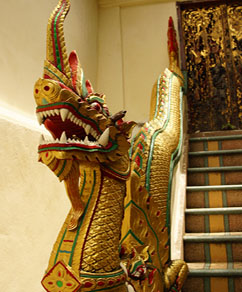 That means you get down to whatever it is you want to do much more swiftly; even if that means just lying by the pool with a vacant look and an ice-cold beer as you empty your head of the noises of your home city.

Being hundreds of kilometres away from the ocean means you are not likely to be swept
away by the sun and surf set keen on dotting the beaches with their prodigious presence.

Added to that, Chiang Mai’s laidback vibe beckons those who may want to swing through the golf courses or are keen on temple trekking pilgrimages. There are hundreds of temples that draw the pilgrims and the curious to the culturally vibrant province of Chiang Mai, though the must-visit is the working monastery, Wat Phra That near the top of Doi Suthep.

You can get “templed out” after a while, at which point a trip to one of many local craft centres may provide welcome relief for those who worship a well-haggled memento to take home. These could be sizeable pieces of furniture or furnishings the skilled artisans have pieced together based on a heritage handed down generations, or a hand-painted paper umbrella.

The night markets in town are outstanding for their colour and vibrancy. If you’ve been a few times, you’ll see the familiar faces in action. Vendors peddle an assortment of trinkets, attire, footwear and other decorative items. You’ll have to navigate musicians who sit in the middle of the road, some in groups playing the electric guitar and an overturned bucket while mournfully wailing away. 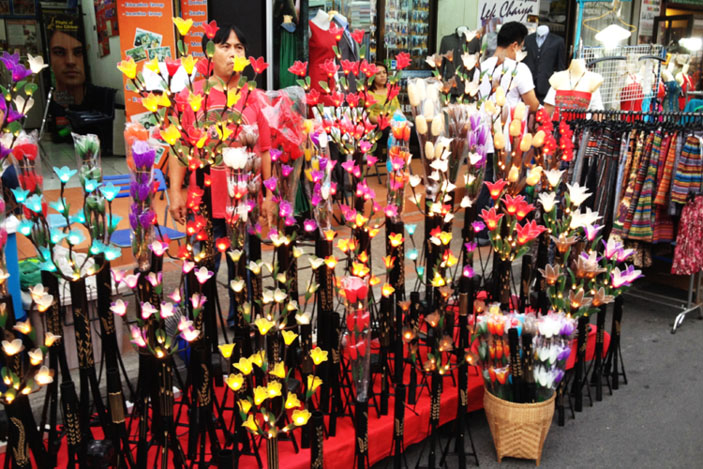 Shopping in Chiang Mai is often a colourful experience. The shops are filled with quirky artefacts as well as local products that carry a sense of modern and traditional expressions: From tradition garb to lively triangular pillows; religious icons to hot cafe culture.

A mixed bag of experiences to be had when shopping in Chiang Mai. From street vendors and musicians to award-winning latte art.

Game To Reinvent And Try

Just 10km out of the city is the night safari, a concept that originated in the Singapore Zoo. Former CEO of the Singapore Zoo, Bernard Harrison (Read Going Ape With Bernard Harrison) had more than a hand in both, with the newcomer being almost twice the size of the Singapore menagerie. A bit further out of Chiang Mai, are the elephant camps that offer out-of-work pachyderms and their mahouts a chance to earn their keep as entertainers after the ban on teak tree logging came into effect in 1989. 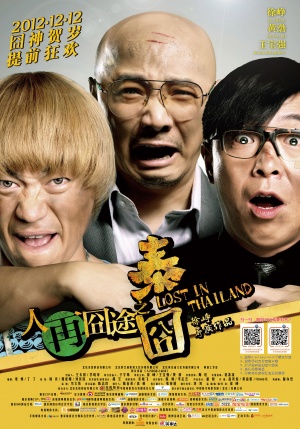 Chiang Mai’s reputation for being far from the crowds is being challenged by sound infrastructure, its seat of education in Thailand and the resulting high literacy rate, which have combined to attract many international companies to set up their businesses here. Hence, the increase in international flights filled with well-attired businessmen who stick out from the tourists.

Chiang Mai has seen some lows and highs in tourism. The hotels have been packed with tourists coming in from the region and Europe, and China in particular, of late, thanks to the 2012 film Lost In Thailand. The slapstick comedy, which was China’s highest-grossing homegrown movie ever, was shot largely in Chiang Mai, and now planeloads of Chinese gawkers have been scurrying from location to location to soak up the atmosphere while spreading some of their own charm around.

The Chinese are coming in droves — more than 200,000 visited the city in 2013. A select few would head to Dhara Dhevi given its status as an iconic property that defies many architectural conventions.

The former Mandarin Oriental property was the brainchild of Suchet Suwanmongkol, who built an automobile and auto financing empire in the south of the country, until the devaluation of the Thai baht in 1998 saw him lose US$100 million overnight.

He moved to Chiang Mai to gather his thoughts and saw that the hotel business was one that could become a worthy replacement for what he lost. Many viewed his idea to build a rich slice of northern Thai culture on 60 acres of land with skepticism, but that didn’t deter him.

Nor did it faze local-born architect Rachen Intawong, who was probably put on this planet for the task. 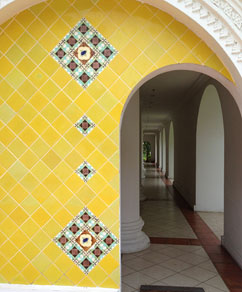 Spread around the real estate is a quite stunning array of visual, aural and olfactory treats spanning the region and neighbouring countries — from the palatial lobby areas with intricate carvings and quiet corners to the various pathways leading to the outstanding spa and the spacious Akaligo, where breakfast is a bustling affair overlooking the blue waters of a pool that never seems to be crowded. The suites and villas are built to represent dwellings of varying architectural themes, though they are all well appointed and filled with the art and photos that Suchet, an avid collector and photographer has amassed.

It’s only by cycling around on well-used blue Song bicycles, dodging buggies that constantly ferry guests to their villas, that you get the sense of variety and the spread of the resort. The use of eclectic tiles along corridors, on walls, in the pool, as well as a mix-and-match of fixtures and fittings create a sense of constant anticipation; what’s going to catch your attention around the next corner?

The villas are built to varying dimensions, and some overlook the rice paddies with immobile yet lifelike scarecrows and a well-fed buffalo that plods along, others have vegetable patches at their entrance. The colonial suites are in more organised structures, some aspects of which are reminiscent of the Raffles in Singapore. Here, too, the generous internal space is well packed with artefacts and curios.

The dining options include Farang Ses, a French restaurant helmed by a chef from the Bangkok Mandarin Oriental’s Le Normandie Restaurant, the outstanding Le Grand Lanna with its superb Thai fare, Fujian, which serves up Cantonese food in the Kad Dhara shopping village just outside the hotel, where there is also the Dhara Dhevi Cake Shop, a tea salon which offers macarons and a must-try tasty take on a local favourite — Chiang Mai sausage wrapped in flaky pastry.

Tiles sourced from the region add colour and liveliness to the resort.

It’s often in the software that many outstanding properties fail. Here, it’s the software that is outstanding. The staff are vigilant and responsive; the years of Mandarin Oriental training having paid dividends as they anticipate your needs, with very little — if anything — slipping through the cracks.