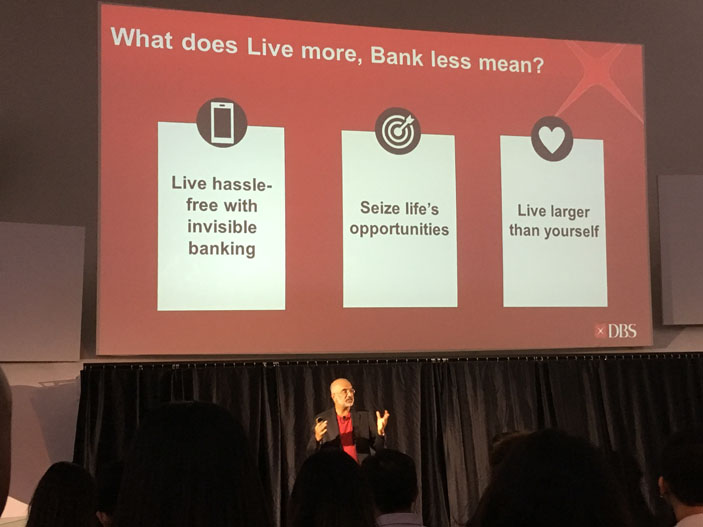 IN ITS effort to continue to remain relevant against traditional and new competitors, DBS has decided to launch a new campaign as it celebrates its 50thanniversary.

With its new slogan — Live More, Bank Less — DBS wants to be omnipresent without being in your face. It wants you to be banking with every step you take.

Taking its cue from Google, Alibaba, Tencent and other dominant players in the virtual space, Gupta added that “the Bank simplifies your interactions”.

The focus is increasingly shifting towards a near-subliminal presence in many aspects of DBS customers’ activities.

From banking services to transacting for goods, “and in the next few weeks it will let you buy and sell your home”, DBS identifies what its customers’ needs are and tries to deliver a solution.

“We have always been disrupting ourselves,” Gupta adds.

7 Things HR Must Do To Raise Morale In A Crisis

The Development Bank of Singapore was founded in 1968, and has enjoyed a strong run in terms of introducing new concepts that made it easier to get more bucks for its bank.

Not willing to follow banking conventions to the letter, DBS’ maverick approach led the way with a variety of initiatives that accelerated its growth and reputation as a regional player. Besides many local firsts, it was the first to introduce electronic share application globally.

“The Bank challenged the status quo,” commented Gupta, who joined as CEO in 2009.

DBS has continued to anticipate the needs of a changing economy that had to adjust its offering as globalization and technology helped a rising Asia find its place on the world stage.

In the same timeframe, its market capitalization grew from $20 billion to $75 billion. In the process, it climbed into global reckoning as a top 40 valuable bank.

Operating in Greater China, South Asia, and Southeast Asia puts it in a unique position as the only Asian bank to have a presence in this large region.

In the last decade, DBS has made a strong push into the digital space, earning it the accolade of the World’s Best Digital Bank as well as Asia’s Safest Bank.

As new innovations and technology continue to disrupt the financial industry — and DBS plays a role in this by supporting nascent talent in this space — the bank will be spending to keep ahead of the curve. 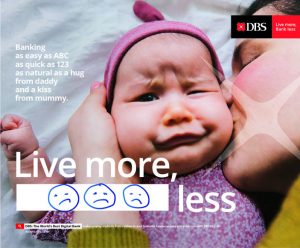 Competition from rivals who will grow wise to DBS’ plans will continue to challenge its position. DBS uses its BusinessClass programme to connect small and medium enterprises in six countries, creating a value proposition beyond financing.

There’s always a threat that new financial services may emerge — like cryptocurrencies did — that may gain a stronger foothold.

By keeping its marketing messages at a human level, DBS is working to connect with its international audiences on a personal level and build a relationship beyond providing financial transactions.

Despite shortening economic and technology cycles, the new slogan may enjoy a longer lifespan that connects with the customer at a deeper level.

By allowing banking to be assimilated into society effortlessly and seamlessly, it becomes less visible, and essentially a much stronger tool.

See also  Can We Live With Failure?