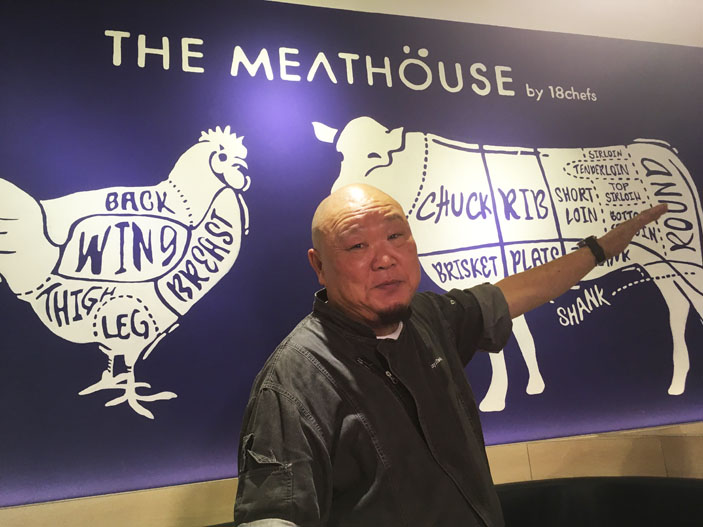 BENNY SE TEO seems to be enjoying his role as a serial food and beverage entrepreneur.

The founder of Eighteen Chefs set up 13 restaurants in just over a decade, using his story of redemption and second chances for convicts as the backstory to selling steaks and supporting dishes like the heart attack fried rice at prices not designed to cause a cardiac arrest, especially in the pocket.

While Eighteen Chefs seems to have hammered hard at the competition around the island, Benny felt there might be some measure of business cannibalisation if he set up another Eighteen Chefs outlet.

So he opted to create a new concept at a revamped mall in Tampines. The MeatHöuse serves halal fare at Century Square, which reopened on June 6.

The MeatHöuse has kicked off on such a high, Benny is amazed at the reception it has received.

“Usually if you start a restaurant, you don’t expect to make money in the first six months. The next 6 months you expect to lose less money. By the second year, you’re starting to look better, and by the third year, it should be breaking even,” he explains his rule-of-thumb calculation based on his network of restaurants.

“But this one has been incredible,” he says rubbing his bald pate in lieu of scratching any non-existent hair. The steady flow of customers keeps servers and chefs on their toes.

The big lesson that Benny has learned is that the restaurant business cannot be about the one outlet. (Anthony Wong of Creative Eateries explains it in his interview with STORM.SG entitled Who Makes Or Breaks A Restaurant?)

“You have to expand the business, otherwise you are losing money and you’ll never grow.

It’s a simple matter of economies of scale, which Benny wants to apply to Meathöuse in due course.

Who Makes Or Breaks A Restaurant?

Knife Skills Of Chef Akira Back

A Spanish Touch At The Meathöuse

But the proposition at Tampines with his new outlet is slightly different. Benny is totally enamoured with his chill-red Josper oven, which fires up the steak and cooks it on two separate shelves. He uses charcoal and the fiery hot binchotan wood to add the aroma and flavours to the cuts of meat.

“We have to make a difference. I saw this oven on YouTube and decided to get it, despite its cost. It’s from Spain and can save me the time needed to sear meat on a pan before putting it into the oven,” Benny explains.

Generally, dishes are served up within 15 minutes, except for the Tomahawk steak which takes 30 minutes given its sheer size. The rib eye is the most popular steak, but the meat skewers over creamy mash is also a quick mover. There’s also the not easily found carpetbag steak, with the oyster trapped in a filet mignon.

The 156-seater restaurant has an open kitchen with extra strong extraction, which shows the diners the hustle-and-bustle in the tight kitchen. For all the quick moving about and heat of various devices, it’s an organised environment and everyone knows what has to be done.

“We have about 400 staff in the company,” Benny says. “And about one-third have been convicted of a crime.”

Based on his own experience trying to get a job as an ex-con, Benny has insisted on an HR policy that doesn’t ask the question about previous convictions.

But that doesn’t mean he’s there to take in all and sundry.

“I’m not a halfway house. I’m not a religious group. I have to make full use of my resources.”

But he says finding prisoners to work with him is becoming more challenging these days.

“Now prisons have job fairs. And all the big companies are there to hire them.”