JON A. worked in a major bank for most of his working life.

With a degree in Business and Finance and an inclination for technology and data processing, Jon (not his real name) was the bridge between the back offices of the Finance Division and the IT department. The adoption of more efficient and streamlined payment processes made possible by innovative FinTech applications meant that fewer workers were needed in the Finance Division. Jon and a few of his colleagues engineered their own redundancy.

But, the bank was compassionate. In addition to the severance package, Jon was given opportunities to sign up for several skills-related courses for free. After a certificate course, he took up a diploma programme, all the while applying for jobs in the industry.

But his work experience was becoming more irrelevant by the day, and after one year, he started his own company as a career counsellor providing job search services for retrenched bankers.

Or should he have become a Grab driver?

This is a common story in a society that wants to reach for the brightest stars that technology has to offer. It’s something that needs to be done, but there will be casualties in its wake.

It is impossible for anyone keeping up with business and market news online to miss the advertisements and loud proclamations about the multitude of companies embracing FinTech, PropTech, EdTech, Cypto-currencies, Blockchain technology, Artificial Intelligence and BigData.

Finance industry leaders expressed confidence that Singapore’s banks will continue to grow in this new epoch of technology disruptions.

Head In The Sand

Economists are of the opinion that higher productivity from the latest technologies and innovations will lead to more jobs being created, as has happened in the previous industrial revolutions.

Even university professors leading the charge in disruptive technologies are optimistic that more high-value jobs will spawn out of the repetitive jobs that will be displaced by automation.

I have had conversations with government officials who were optimistic about the abundance of high-value jobs created by robots and artificial intelligence. They do, however, lament the limited supply of skilled labour.

I asked the bankers, “how many bank branches might be closed with the banks’ adoption of mobile wallets, FinTech, Blockchain and BigData? How many jobs in the banks’ middle and back offices will be redundant?” No answers are forthcoming.

I asked the policy makers and technology creators, “a hundred engineering jobs were created which subsequently led to the retirement of a thousand taxi drivers, do you really think there will be a net gain in jobs?” They firmly believe that they are correct.

I asked the economists, “the correlation between population, labour-force and GDP worked well in the agriculture and manufacturing economies. But in this tech-disrupted economy or going forward into the 4th Industrial Revolution, would such a model remain valid?”

The economists are sticking to their methods. They are happy to forecast GDP growth, by relying on age-old and tested economic constructs of labour force growth, labour productivity and total factor productivity.

What’s Next After Fake News Legislation?

Swiss Astronaut And The Gravity Of Space

Where are the net additional jobs created from tech disruptions? Does it count that we needed to employ a few hundred bicycle marshals across Singapore to pick up strewn bicycles? That job exists to put right our lack of civic-mindedness, it is not a job created out of technology and lifestyle changes. 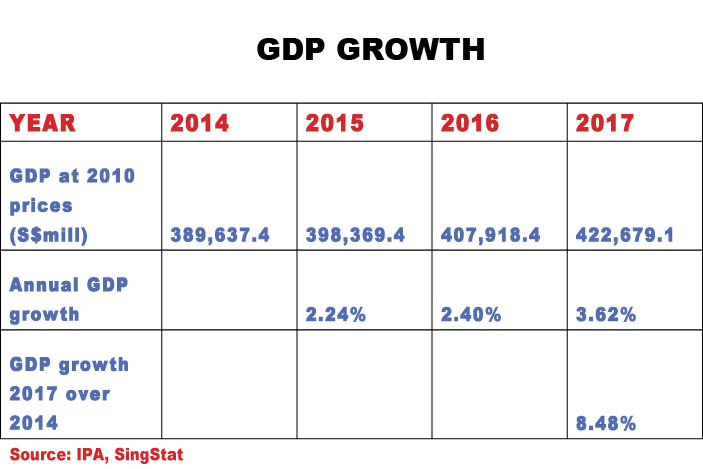 The Singapore economy did well to maintain relevance by keeping up with automation and transforming our industries by embracing disruptive technologies. Over the last 3 years, adoption of new technologies in manufacturing and services industries and a strong global market led to an 8.5% growth in Gross Domestic Product between 2017 and 2014.

However, total employment grew by a mere 0.6% over the same period. 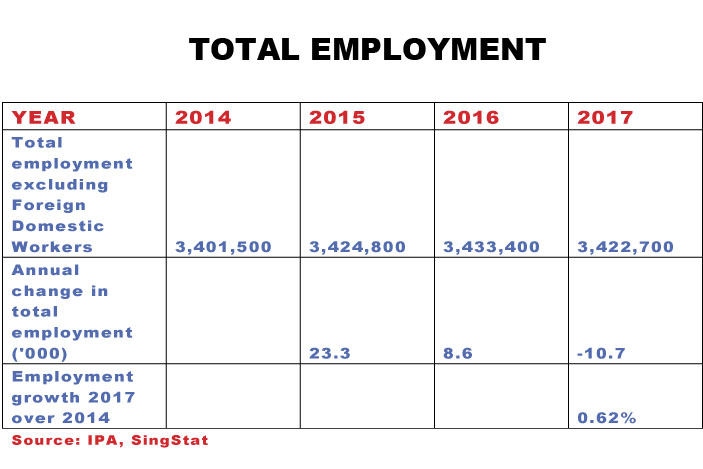 In fact, as the Singapore economy becomes more tech-enabled, the total number of jobs available will shrink further.

This is consistent with the population data from SingStat, which shows that for the 12-month period to June 2017, the number of foreigners with work passes dropped by 36,000.

“The disconnect between a rising GDP and diminishing jobs is becoming so pronounced that it’s difficult to continue to ignore it, although I’m still somewhat amazed at how few economists, even at this stage, are willing to step forward and finally acknowledge that the underlying assumption of classical economic theory – that productivity creates more jobs than it replaces – is no longer credible.”

Global management consultant Bain & Company published a report in February 2018 titled Labor 2030: The Collision of Demographics, Automation and Inequality. They did not sugar coat their findings. In the second paragraph of the Executive Summary, Bain stated that before the year 2030, automation could make 20% to 25% of the current jobs in the USA irrelevant, “hitting middle- to low-income workers the hardest”.

Bain & Company is just one of the hundreds of multi-national corporations warning about the rapid decline of jobs due to disruptive technologies. Forward-thinking industrialists such as Tesla CEO Elon Musk and Virgin founder Richard Branson are already calling for Universal Basic Income to support the long-term unemployed and the unemployable.

Sadly, these are not topics that the local media are keen on pursuing. The Singapore government’s stance may be a preference for presenting positive news to the citizens so that we do not face the painful hard truths.

Ku Swee Yong is a licensed real estate agent with International Property Advisor Pte Ltd and the Co-Founder of HugProperty. His fifth book Preparing for a Property Upturn is available in all good bookstores.