Pokemon Go burst onto the world stage and grabbed a sizeable share of people who had data and time to spare. By Ethan Quill

The free-to-download augmented reality mobile game developed by Niantic was launched on July 5 — a month later in Singapore — and sent the otherwise indoor- and device-bound community out into the open. It’s a clever way to get people hooked on an app under the pretext of encouraging them to walk or run in search of rare creatures, and generally unleashing the spirit of competition in an otherwise sedentary audience.

But there is nothing altruistic about these monsters.

The hordes chasing down those little monsters helped to send the Pokemon stock skywards. It is estimated that there are more than 50 million people playing the game worldwide, which is great news for the makers, which earned close to USD5 million on its first day of release.

Nintendo, which created Pokemon in 1966, saw its market value increase by US$9 billion within five days of release of Pokemon Go.

Companies jumped in on the craze even as some countries — like Singapore — exercised caution about where and how the craze would unfold. 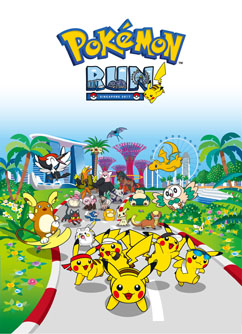 National Parks Board (NParks) said it didn’t want hordes or people chasing things down in sensitive areas of the parks, and wanted to ban Pokestops — the virtual pit stops — in these parts. In sensitive defence zones there are likely to be no Pokemons, and even if there were, would you want to risk facing the business end of a rifle?

But, just as it has surged in popularity, the craze for Pokemon seems to have waned. It could be the paltry data plans on offer from the telcos or the fact that it gets increasingly more difficult to get the required number of points to climb the levels of the game.

But the level of creative inventiveness around the Pokemon name is to be lauded.

In trying to elevate enthusiasm levels for the app, more real-world activities will be introduced. The Pokemon Run will take place on 14 January 2017. This is the first of its kind in Southeast Asia and is intended for anyone aged four and above. For more information poke around here.