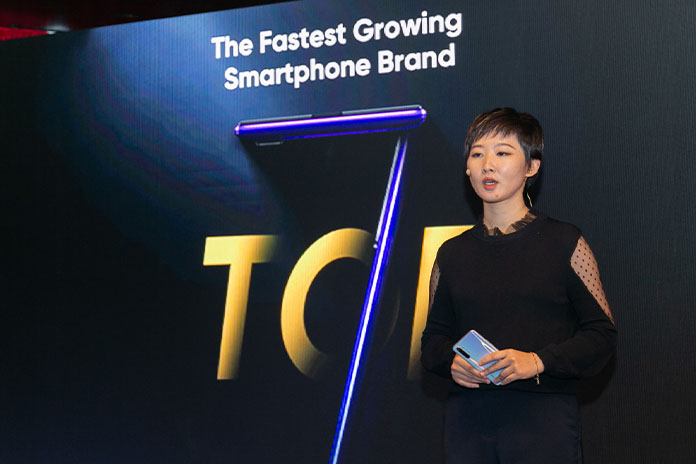 BREAKING into a congested market is tough enough, but when you’re up against established global giants, the challenges are even greater.

The global market share of smartphones is dominated by Asian brands. Apple is sandwiched  between front runners Samsung and Huawei, with Xiaomi and Oppo making up the top 5. In 3Q2019, smartphone vendors shipped more than 380 million units

Realme launched its mobile phones and small range of products in 2018.

As an independent brand it would have found the going extremely tough. Fortunately for it, the brand is part of the Chinese consumer electronics giant, BBK Group, which also markets smartphones under the Oppo, Vivo and OnePlus brands.

BBK ships the second-largest number of smartphones, after Samsung.

But smartphones are not going to sell on a name. A brand needs a bigger picture, so Realme has opted to target the young at heart, focussing on its 64 megapixel camera and features that appeal to those with a youthful disposition.

“The Singapore market is more mature compared to other markets within the region, with plenty of options for consumers,” explains Sherry Dong, the brand’s marketing director for the region.

“Singaporeans are highly tech savvy and know exactly what they want and don’t want from a smartphone. By applying this understanding to the development of our product line, as seen in the powerful technology and eye-catching design in the Realme XT, we are confident that we will be able to resonate with Singapore audiences.”

The top-tier model debuted in India, one of the brand’s successful markets. Its relatively low price point and rich features helped in its mass-market adoption.

“Smartphones have become the key tool for most people to document their day-to-day life and to connect with one another,” Sherry explains.

“This is true for India and most places around the world. Smartphones play such a big role in the lives of people today, and they are demanding more diversity and more powerful image technologies – without skimping on fashionable design or a seamless user experience.”

Realme has also launched earbuds, powerbanks and a bag, to build a brand presence beyond the phones, while encompassing lifestyle trends.

A more realistic picture of the future will become clearer when 5G kicks in. We might see the real Realme emerge given that it is free of encumbrances and has the backing of a large group’s resources.

See also  8 Tips To Save You From Cyber Crying