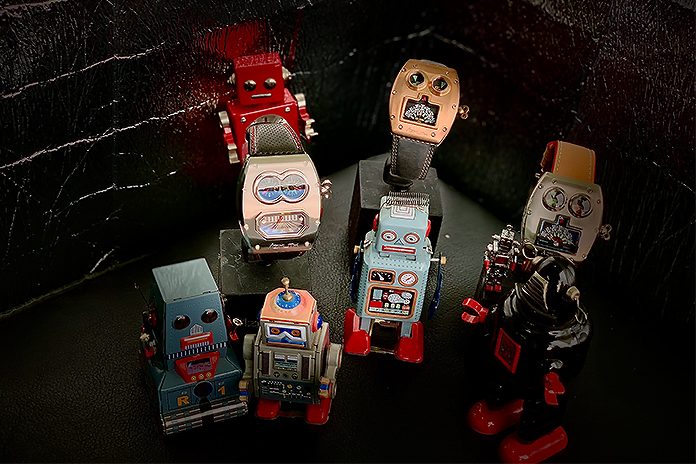 OVER time, some robots have bucked convention.

In their nascency, robots rose in our collective imagination, able to tackle the mundane and the amazing. And yet they also loomed as a threat at the back of our minds, as a force that could result in our day of reckoning.

In some insidious fashion, the robots are wresting control of our lives. They are taking over our jobs and forcing us to ask way too many questions of ourselves and where we are headed.

So, it’s time to take some of that control back.

Wind it up and strap it on. The Azimuth Roboto watch will only always remain a fixture on your wrist.

The Toys Bring Out The Boy

Robots line his shelves, alongside books about them. His fascination for the Styx track Domo Arigato, Mr. Roboto sent him searching through his own imagination and his collection of robots for a way to express his admiration for these mechanical marvels.

By the light of the popular and now rare lantern robot, Long let his story unfold: Roboto 1 was the inspired creation.

Roboto 1, strutted out in 2008 as a representation of the DNA of Long’s watch brand, AZIMUTH.

With its chunky, smiling face, Roboto 1 housed details that could keep the wearer occupied for quite some time. It heralded AZIMUTH’s direction towards watches of character and irreverence that appealed to those who didn’t see the need to conform.

“Most watches made at that time were traditional in terms of look and feel,” Long recalls. “The high-end timepieces were finely crafted, like those by Breguet and A. Lange & Sohne.

“The Chinese market was buying branded watches for gifting that were thin and small. So, it was not surprising that people in the indsutry thought we were creating toys.”

That was a compliment in itself for Long who wanted to bring back whimsy to the watch world.

Eight years after the launch of Roboto 1 with its colourful, comic packaging, out strutted a meaner, bigger Roboto 2. With its open back case and sapphire crystal back, you could see the Swiss inner workings of the updated Roboto.

It was all about precision and style, but done with a smile on its face.

By this time, Roboto 1 was already showing signs of appreciation, doubling in value in the reseller market. The small production runs meant these cheerful faces were becoming harder to find and were justifiably attaining cult status.

Special editions were called for, and along came Bronzo, made from German bronze, in a small run for Hong Kong.

You could argue that Azimuth’s small army of Robotos has led the march forward for watches with character.

Many other models have been inspired by the Roboto series and Long’s quirky dreams about telling time differently.