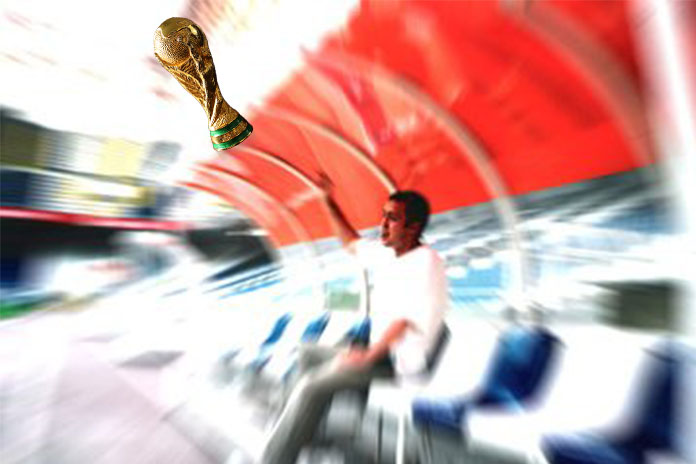 That was the succinct response from a veteran football commentator when asked about the latest desire to send Singapore to the FIFA World Cup.

That was probably the most polite response amongst the gestures, mutterings and laughter that met the audacious idea.

Version 1 of this dream was Goal 2010, when then Prime Minister Goh Chok Tong was so moved by the way France won the Cup in 1998, he figured Singapore could import talented citizens to stitch together a team to qualify for the 2010 final in South Africa.

It fell onto the shoulders of then Minister for Communications and President of the Football Association of Singapore, Mah Bow Tan, to take the ball and head for goal. Imported players helped the Singapore team, then ranked #81 in the world, compete well in regional competitions, while the S-League (introduced in 1996 to make up for Singapore’s exit from the Malaysia Cup in 1995) was also meant to feed fresh talent to the national team.

2010 came and went, and Singapore’s footballers stayed at home.

But it also marked the slide of Singapore’s football standards. The S League is now the Singapore Premier League, a name change which means very little to the scattering of fans that show up for matches.

Singapore has since doubled its ranking, dropping to #162 in the FIFA World Ranking, but that dream to qualify for another World Cup has been amazingly rekindled.

The fever for the sport has died down considerably, so unless there are definite plans to raise the standard of play and get involved in more competitions, that World Cup wish is just a case of more wishful thinking and grandiose ambitions.

But that hasn’t stopped version 2 of the World Cup dream from surfacing.

FAS vice president Edwin Tong, who is also the Senior Minister of State for Health and Law, says qualifying for the 2034 World Cup Finals is a “realistic” goal. He attributes this confounding optimism to the expanded 48-team format for the tournament and the doubling of Asian teams to 8. Southeast Asia is also aiming to jointly host the World Cup in 2034, which, if realised, may give a homeground advantage to some of the 10 ASEAN countries.

Even so, Singapore is ranked seventh among the ASEAN footballing fraternity.

So, what went wrong?

That might yield more insights to help football move forward.

While football is still popular, it’s no longer at the level of the galvanising Malaysia Cup that featured a mix of talents and players from all walks of life who helped unite the nation and raise a huge roar at the National Stadium. Most of the action is now on television and in pubs, where support of foreign teams still continues. The love for the world game is still evident.

Despite enjoying political support, football seems to have lost its ability to ignite a nation’s passion to perform. Some reckon it’s these kinds of intrusive expectations that keep the sport from developing organically; preventing the beautiful game from flowing and flourishing in its own way.

Are We Built For It?

The Japanese and Koreans make it to the Finals, but only just, and  struggle to reach the glory rounds. China, India and Indonesia, with the world’s largest populations, are unable to muster teams to make a significant impact on the world football stage.

Perhaps we don’t need to make it to the World Cup Finals.

Maybe all we need to do is learn to enjoy the game. Bring back the desire to play well in the true spirit of the game.

Sometimes dreams just lead you astray until you wake up to reality.