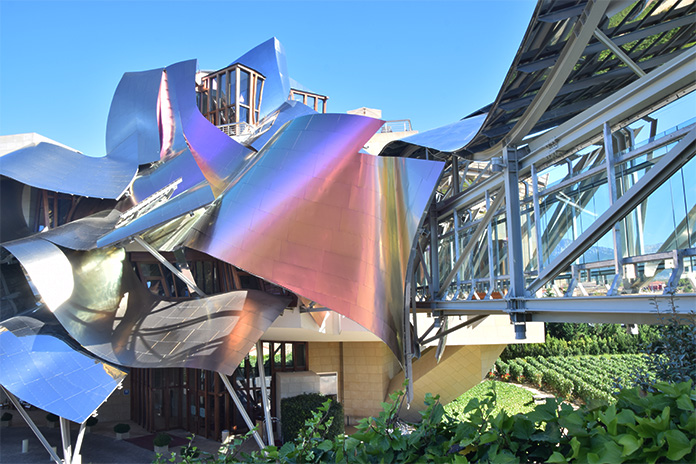 FROM architecture born out of soaring imagination to cuisine that continues to lead in creativity, Spain is seldom ever plain.

Art, architecture, food and wine dominate the Spanish landscape. The world’s third-most visited country offers a lively mix of sights and tastes that leaves a lasting impression on the visitor. Often under-visited by Asians who tend to head towards France, Germany or England, this lack of exposure is evident in the paucity of Asian restaurants. But then, with all those tapas bars and Michelin-starred restaurants, why hunt down Asian chow when you’re on holiday?

Tourism is a major pillar of the somewhat battered Spanish economy, but the country has also realised that China’s newly moneyed are hot to trot to foreign lands. There’s a big push to lure the Chinese to cheaper branded shopping than France or Germany, and gourmet options aplenty (except for flavours of home). The more affluent are happy to check out the branded boutiques along the country’s most expensive street, Passeig de Gracia in Barcelona, while staying in the contemporary, efficient and conveniently located Mandarin Oriental Barcelona.

Others can roam the several precincts with churches, narrow passageways lined with shops, or broader avenues like La Rambla, a major artery for tourists and locals alike.

Connecting Placa de Catalunya and the Christopher Columbus monument at Port Vell, this 1.2km pedestrian mall is lined with cafes and souvenir shops.

It’s still hard to find a good café latte in general in Spain, but order a cortado (espresso with some warm milk) and at least you’ll get a decent coffee experience.

The offshoot streets offer perspectives on the crowded markets, restaurants and yet more souvenir shops. But the collective experience leaves you with a cross-section of experiences that lay out what Spain has to offer in its colourful arsenal of options.

Barcelona Is A Messi Place

Families wearing the Catalan football giant’s sporting jerseys can be seen wandering around the city, with MESSI across their back. Sports stores proudly hang the Lionel Messi jerseys high, allowing it to flap in the wind like a flag. Such is the fabled reputation of the Argentine goal-scoring machine, the city where he plies his trade has happily adopted him as their golden son.

As the capital of Catalonia, Barcelona may have more cause to cheer if its quest for independence succeeds where Scotland’s failed. This autonomous community of Spain has four provinces — Barcelona, Girona, Lleida and Tarragona — and covers an area of more than 32,000sqkm.

Besides offering a variety of natural attractions, footballing legends, waves of tourists, and having Spain’s most expensive street in Passeig de Gracia, Catalonia believes it has what it takes to go it on its own.

It’s important to locate yourself in the right spot. There are hotels in abundance, and Airbnb seems to be a popular option. But if you’re looking for the kind of intuitive service and excellent delivery, it’ll be hard to beat the Mandarin Oriental Barcelona. Bang on Passeig de Gracia, this five-star hotel has high-end fashion house Brioni and Tiffany propping up the property. The spacious suites are tastefully fitted out, and you tend to ignore the fact you don’t have a brilliant view since everything looks great on the inside.

Sitting in Barcelona’s hop on-hop off tourist buses gives a quick picture of the city’s attractions. There are a fair few sights to occupy your time for a few days as you hop on and off, but it will reach a point you’ll just want to let the city drift by.

On a balmy summer’s day, the rooftop domes and designs are beautifully framed against an azure cloudless sky. Inevitably, you’re going to come upon the towering structures of the Templo Expiatorio de la Familia Sagrada. You sit up, because it’s hard not to take notice of the towering spires, soaring 100m in its quest to connect with the heavens,  the cranes that are still working on some of the external structures and the incredible detail on the walls.

This has been a long work in progress since 1882, with Antonio Gaudi taking over construction the following year, before becoming its official architect in 1891. Gaudi passed away in 1926, but had established the vision that he desired for the church, and which is being followed through till today. By the time it’s eventually completed, there should be 18 towers — a dozen dedicated to the apostles, four to the evangelists, and one each to Mary and Jesus.

Gaudi’s amazing mind and attention to detail is in soaring evidence here, as he dovetails nature, religion and architecture into a bold, bizarre eyeful of activity that earned the Familia Sagrada its UNESCO World Heritage listing, in 2005. There are several facades that showcase aspects of Catholicism that will appeal to the devout. This is one of seven of Gaudi’s creations that are on the list.

Given its stature and presence in the centre of the city, there will be the inevitable long purgatory-like queue of people waiting to enter the icon of Barcelona. The line inches forward, and in the blazing heat, it becomes all the more unbearable. And you’ve got to watch out for those legendary teams of ghostly pickpockets. But, why join the long conga line when you can book online? Just note you have a window of 30 minutes to make your way in, but you skip by those queuing in the heat and you enter a quite stunning interior space. 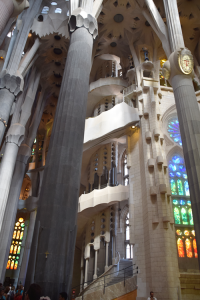 While the exterior is old world and exposed to the harsh elements, the interior contrasts this with modern touches and colours that line the walls, ceilings and floor in a cooler ambience. Gaudi’s eye for detail, and curious  juxtapositioning of elements offers lots to ponder in the inspiring building. Even if you don’t embrace Gaudi’s opinion of the church — “A church is the only thing worthy of representing the feelings of a people, for religion is the highest thing in people.” — you can’t help but feel thankful that he translated his belief into a monumental representation that can be appreciated by all.

While the throngs mass around this masterpiece, a short stroll along the Gaudi Avenue pedestrian walkway brings you to another stunning example of Catalan modernisme.

The Sant Pau is a former hospital, which was declared a UNESCO World Heritage site in 1997.

Originally built in 1902 by arcitect Lluis Domenech I Montaner, it became quite a significant landmark in Barcelona. Only thing is, given its horizontal format, it didn’t stand out like the Sagrada Familia. The world’s largest Art Nouveau site comprises a number of buildings linked by tree-lined walkways. It is still being renovated, but you can imagine how stunning it will look when it’s ready.

As we wander around, we come upon a guided tour that describes the evolution of one of Europe’s oldest medical institutions. In another pavilion a Japanese bonsai exhibition fills the room.

The mix of colours, structures and decorative elements on the roofs of the buildings hold your attention above ground, while a network of tunnels connects the various pavilions. It can be a bit spooky walking along these tunnels, as suddenly you’ll see a hospital orderly pushing a gurney with a patient on the way to the operating theatre. Projected onto the wall, the image is a reminder of how the tunnels were used to transport patients, thus leaving the grounds clear for other traffic.

Stars Above And On Land

At night the heavens overlooking the Bay Of Biscay must be awash with stars. San Sebastian has a disproportionately large concentration of Michelin stars, including three of the five three-starred restaurants. Martin Berasategui, Akelare and Arzak offer different cuisines, but innovation is a key ingredient.

By day, on the coastal hillock overlooking the expanse of azure, Akelare occupies a fairly nondescript building. Chef Pedro Subijana’s restaurant has been in San Sebastian since 1974, but despite this, it warns on its homepage that you shouldn’t rely on your car’s satellite navigation system to find the restaurant.

You get a sense of what to expect, at least as far as the view is concerned, as you wait for the doors to open at 1pm. A window seat is immediately tempting, but after a while, it becomes evident that too much of a good thing could be bad for you.

Floor-to-ceiling windows look out onto blue on blue as azure water meets sky at an indistinct horizon.

If you’re there with a quiet date, the view will fill in the long silences. And the wait staff will probably do the rest. More than a dozen staff are efficiently buzzing around the room, attending to assigned tables that seat around 50 patrons.

The noise level rises in proportion to the wine served. The cuisine is a challenge to your mind and palate. What you see is not what you taste. A leaf made of foie gras, salt and pepper made of sugar and brown rice, jelly fusilli stuffed with parsley or soy sauces, gin and tonic masquerading as clear jelly and ice-cream.

At the Restaurant Marques de Riscal, in the stunning Frank Gehry designed hotel and winery, chef Francis Paniego combines flavour with showmanship. The one-star Michelin restaurant presents a menu that starts with Samientos, a sinister looking dish of black vine twigs in dry ice. It tastes like squid ink bread sticks. The red wine caviar sitting on foie gras is followed up with ham and chicken croquettes. The pace of delivery is a tad swift, so it’s always good to take a walk along the terrace and watch the sunset change the colours of the church in town.

Then it’s back for more pretty food that tastes as good as it looks.

Restaurante Etxanobe seems to be in an unlikely location, on the top floor of the industrial looking Palacio Euskalduna. The one-Michelin starred restaurant overlooks the Nervion River, the hills of Artxanda and the city of Bilbao, and at sunset has a view that matches what chef Fernando Canales has to offer.

The menu is presented in print and on iPads, which makes for easy reference. Beneath a fabric-lined roof with huge lampshades, the amuse-bouche is served — several tasty morsels, among them a bright red lipstick, which turns out to be fish, and probably not something you’d want lingering on your lips if it’s a romantic dinner.

The mains are all delicately prepared. The tempura prawns were crunchy and tasty, the prawn soup was delicate with its mix of vegetables, a garden’s worth of spicy snails, a generous portion of beef, and desserts that included drawers containing a large chocolate button each.

The birthplace of Salvador Dali has seen its population of 40,000 boosted regularly by visitors to the famous artist’s museum. The museum took 14 years to build and showcases his work, and some of artists who have tried to ride on his coattails.

This is the second-most visited museum in Spain, attracting close to 3.5 million international guests who gawk at the works, wander through the rooms and marvel at his ability to work with concepts way ahead of his time and well beyond the realms of most folks. The jewellery pieces, which are accessed from a side entrance is well worth the visit for the imagination on show.