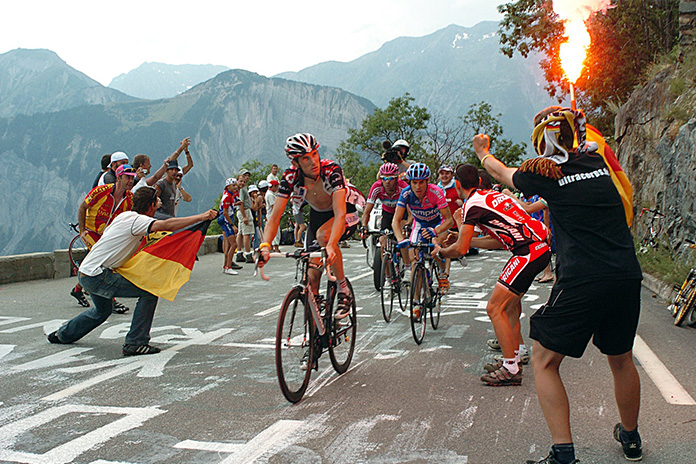 THE ANNUAL Tour de France grips Europe and a watching world as the drama on wheels pits pumped up cyclists against each other, their inner demons and the elements.

I felt like I was flying — like a bird, diving and rolling, weightless and untethered. Everything looked so blue, so sharp. I felt incredibly alive. Into hairpin bends my body surged forward dangerously close to the edge, disregarding the terrifying 1,000-metre cliff drops. The mountains engulfed me. Drenched in sweat, I cycled higher and higher — up to the mountain pass known as the Aubisque. My head was pounding. My heart was pumping like a steam engine — my pulse almost 200 beats per minute. At the top, nearly 2km above the sea, I was amongst the clouds.

It was here, in the French Pyrenees, that I first saw the Tour de France, first heard the thunderous cheering and first witnessed the incredible strength and speed of the professional cyclists. In the flesh, the riders shocked me. They didn’t look human. I wondered how they could put their bodies through such pain.

Many years have passed but I still recall vividly the great Miguel Indurain. He looked like a machine as he roared past me chasing down a lone rider who threatened to take his lead — as he disappeared into the mist at the top of the mountain it looked as if the big Spaniard was racing into the heavens.

Highlights Of A Scenic Race

Over four cruel days I followed the riders up and down those fabled mountains that separate France from Spain. The Pyrenees have always been my favourite part of the Tour de France, perhaps my favourite part of Europe. Here the scenery becomes startlingly beautiful; the villages post-card perfect, the roads precarious and the air crisper, fresher and somehow brighter. The place is saturated in mountain light and it can leave you breathless.

Here the crowds swell and the cyclists try and crush their opponents with heroic rides. For most the Pyrenees are a matter of survival. Some riders fall hours behind the leaders, some are eliminated.

In the Pyrenees, the climbs are so nasty and the pace so high that these poor souls are constantly on the edge of collapse.

In fact, years ago I ran alongside one of the toughest men in the Tour, Neil Stephens, pushing him and dousing him in water as he struggled his way to the top of Col du Tourmalet. Up there, where altitude sickness was common, the air was thinner and people were doubled over and struggling to breathe. 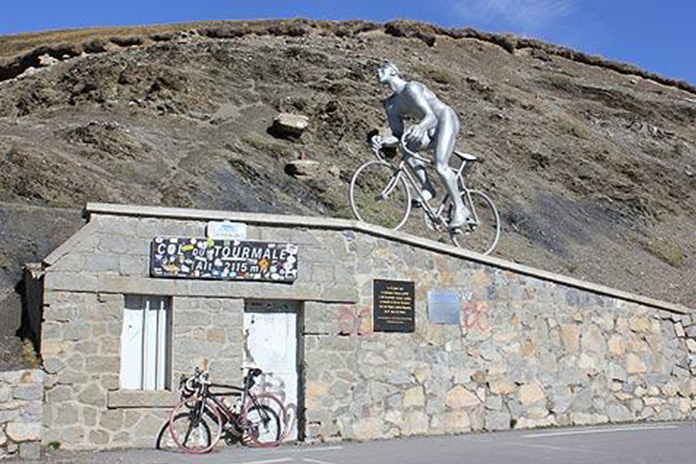 This July, the Tour de France will take place, like it has for more than 100 years. It is the world’s biggest annual sporting event — so popular, more than 15 million spectators will take to the roads to watch, to cheer and be part of this celebration of health, food, beauty and life itself.

On the final day alone, more than two million spectators will arrive in Paris and cram into the centre of the city to watch the finale.

There’s nowhere on earth quite like France in July — 198 riders from 30 nations, 4,000 support personnel, 2,300 journalists, 900 photographers, 260 cameramen and a worldwide TV audience of two billion — there’s no better way to spend three weeks in July, and to watch any dramas unfold beyond as victors are tested for unfair gamesmanship.

The Tour de France is not for the fainthearted. Over the 20 days of cycling the riders will cover 3,500km at an average speed of greater than 40kmh. What’s more, they will face searing heat, driving rain, freezing sleet, ferocious winds and possibly snow over some of the highest and steepest roads in the world. Without doubt, this is the most arduous sporting event on the planet with riders burning 10,000 calories a day and often losing several kilogrammes on a single ride. All in pursuit of a share of the €3.5 million (S$5.6 million) pot, which includes €450,000 for the winner. 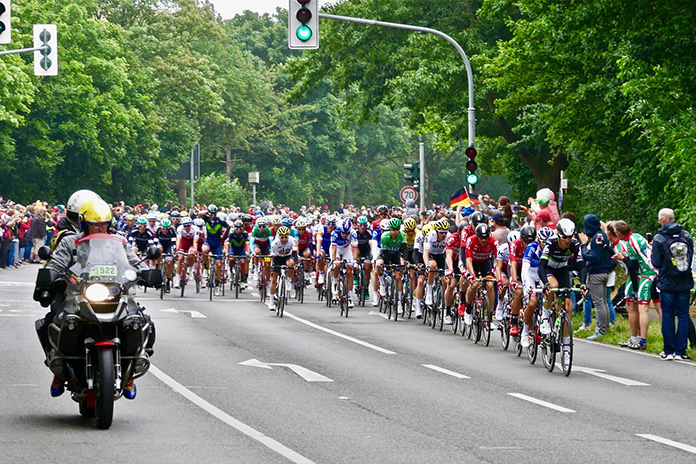 The Tour de France has certainly come a long way. The first Tour took place in 1903 when the editor of the L’ Auto Velo newspaper, Henri Desgranges, decided to stage a month-long cycle race throughout France as a means of increasing readership. Before the first Tour, its circulation was 23,000 copies a day but by 1923 it had risen to half a million.

The headline quite rightly read, ‘The greatest bicycling test in the world’. On July 1, at 3pm, a group of 60 cyclists rode from the outskirts of Paris on an incredible test of human endurance, chasing a pot of 20,000 francs.

That first Tour was won by an Italian-born French resident named Maurice Garin and only a third of the starters actually finished. The following year, 88 riders would start the race, but only 15 would finish. 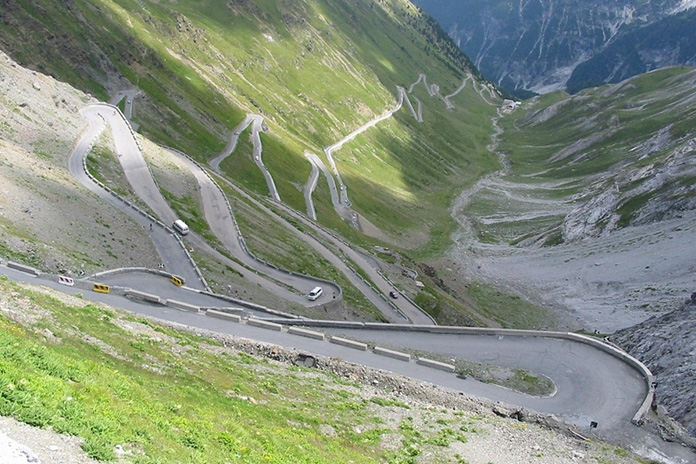 But it was a different race then; the cyclists peddled through the night, rode up to 500km a day, the bikes had no gears and riders were laden down with tools. Worse still, much of the roads, particularly over the Alps and Pyrenees were on little more than goat tracks.

This year the race starts in Liege, the principle city of the French speaking region of Belgium. Liege is the birthplace of tennis great Justine Henin and King Charlemagne.

The route changes each year but nearly always there’s an incursion into one or two neighbouring countries like Germany, Holland, Austria, Italy, Spain and even the occasional sojourn in England and Ireland. The aim of the Tour is simple — the rider who completes the 20 stages in the lowest total time wins.

Each day, however, presents a new opportunity for a rider to win an individual stage and to go down in the annals of Tour history.

Travelling across the cobblestones of Belgium, the riders will fly by the romantic valley city of Spa, famous for its healing thermal waters and its Formula One Grand Prix circuit. Into France and as far west as the city of a hundred steeples, Rouen, the race will do a big 180-degree turn through Normandy and head east past the ancient towns and fertile farms of brie cheeses and the sun-splashed Champagne region.

The riders will then head south on a beeline for the Alps and into Switzerland. It is the stage that begins in the Olympic city of Albertville, however, that promises to be the brutal one.

On that one day the riders will confront four mountain passes including the Madeleine at 2,000m, the Croix at 2,006m, the Mollard at 1,638m and the finish at La Toussuire at 1,705m. Here the riders are close to the Col du Galibier, a brute of a climb, rising 2,646m.

The last time I stood on top of the Galibier the fog was as thick as soup, the ground covered in snow, the temperature below zero and the road in pieces. This isn’t a place for wimps.

The Alps are filled with the passion, mythology and tradition of this great race. Fans from all over the world come to support their countrymen — the Dutch paint themselves orange, the Danes dress up as Vikings, the Australians carry boxing Kangaroos and thousands paint the road in their national colours. Drumbeats, singing, exotic languages and a sea of national flags fill the air.

I remember cycling up the most famous climb, the Alpe d’Huez, between a massive crowd and hearing so many different languages and accents. What a festival — wine, sun, cycling and millions of people in the most striking and glorious landscape in Europe. From the bottom of the climb, I recall staring up at a road in bewilderment. Had it not been for the thousands of other cyclists making their slow and painful ascents, I would have regarded the climb with awe and simply gone home.

Instead I climbed for almost two hours. After 7,000 pedal revolutions I took my place at the top of the Alps.

The Noisy Push To Be Seen

Four out of 10 fans that come to the Tour de France do so primarily to see the ‘Caravan’, a moving publicity parade of sponsors’ trucks, buses and cars that travel ahead of the riders and throw souvenirs into the crowd. There are Michelin Men that dance, colossal Coke cans that leap about, room-sized coffee machines with billowing steam, 3m-high watches that tick, dancing lions and speeding trucks with scantily clad girls hanging on for their lives.

Caps, food, drinks, maps, confectionery and other Tour gifts are launched into the spectators.

What follows is a deathly display as the crowd puts their collective body on the line to secure their piece of the Tour. This year the caravan will be 20km long, with 160 vehicles, 600 people, 33 brands and 16 million gifts.

After the Alps the tour continues southwest past the sunflowers of Provence and on to the Mediterranean. It is nearby, that in the 1967 Tour, the British champion Tom Simpson died uttering the fabled plea, “Put me back on my bike.”

Simpson was trying to climb the ‘Giant of Provence,’ the spectacularly torturous Mount Ventoux that rises from sea level to a peak of barren, bone-white rocks at 1,909m. When I rode up the Ventoux, it was with the father of the legendary Tony Rominger, winner of the Tour of Italy, Tour of Spain and for a time the world’s fastest rider over one hour. Towards the summit, Rominger surged away and despite being 40 years my senior, finished the climb way ahead of me.

Cruel days await the cyclists in the Pyrenees Mountains as they tackle the high-mountain passes of the Peyresourde, Aspin, Aubisque and the gut-busting Col du Tourmalet that rises to 2,115m. At the heart of the Pyrenees is the city of Lourdes and it is said that it has more hotel rooms, per capita, than anywhere else in France, including Paris. The reason for all these hotels: Religion.

Lourdes is the place where Saint Bernadette reputedly saw visions of the Virgin Mary. That and the Holy Water which springs from the area, draws millions on a pilgrimage each year. While this is an inspiration for many, the riders will suffer when they pass Lourdes on their way to the brutal Col d’Aubisque.

The riders will then storm into Paris for eight circuits of the city centre over the most famous cobblestones in the world. There’s nothing like getting there early and watching the day unfold — seeing the streets scrubbed, the French flags hoisted, the people pour in and the temperature soar.

Looking up the Champs-Elysees it will be bathed in sunlight, lined with green trees and draped in the French Tricolour. Before the riders arrive, Paris will go strangely quiet — tense — like the anticipation absorbs all the sound. But when the cyclists arrive there is an eruption of noise and the city becomes frantic. The riding is fast, aggressive and dangerous.

Every year we scream like crazy men. Suddenly a group of riders will make a desperate, brave move. They will fly past the crowd and take off for the finish line. The crowd will cheer hysterically. Last year the Australian Cadel Evans threw his arms up in victory. Along the Champs-Elysees the changing light will signal the end of the Tour. The fans will begin leaving Paris but already they will be counting down the days to the next Tour de France.

This article was first published in STORM in January 2012.