IN A DECADE, Troy Chin plunged from high-flying executive in the Big Apple to a penny-pinching artist in the Little Red Dot. Talk about reinventing yourself…!

The desire to come back home to Singapore and the turbulence of the music industry in the mid-noughties, the start of the digital revolution in music — saw Chin return to Singapore in 2007 and try his hand at comics.

He had been drawing for two years before, but launched his first book, The Resident Tourist (Part 1), in 2007.

By his reckoning, his works are “a little out there”.

You will find no costume-clad superheroes common in books from the West or the adventures of high school students with paranormal abilities in the style of Japanese manga.

Instead, Chin’s books capture the reality and quirks of his own life story — his struggles as an artist, readjusting to life in Singapore, dealing with his decision to return to Singapore after a decade away. These are also interspersed with the anguish of his early years growing up in Singapore.

Much of this “pain and suffering”, as he labels it with a cheeky grin, is chronicled in his longest running series — The Resident Tourist (TRT). Already in its eighth book, Chin promises more in the works. 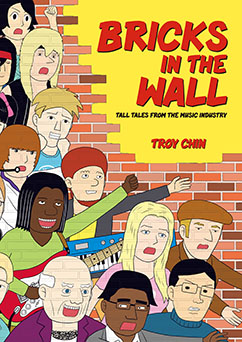 Almost a veteran of the local scene, he already has 16 books under his belt, including Loti — a four part children’s series, and Bricks In The Wall, which satirises his experiences in the music industry.

He received the National Arts Council’s Young Artist Award in 2011 and is also a consultant and regular speaker at the Singapore Writers Festival.

In the first part of a two-part interview we catch up with Chin about creativity in Singapore and his time in National Service.

Are We Fighting Fit?

The Ink Of Life