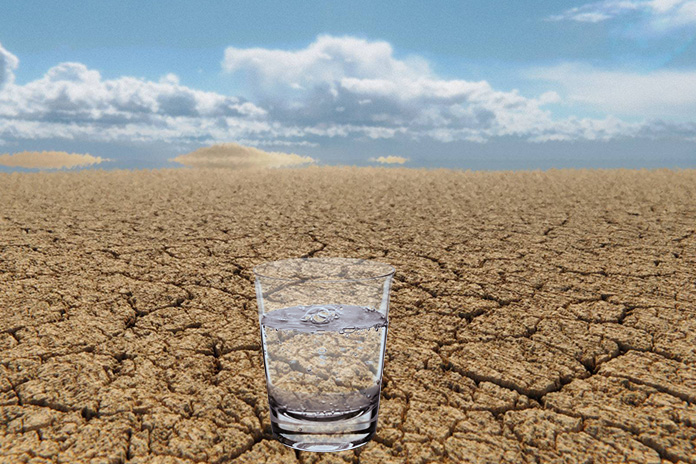 NEARLY 8 billion people inhabit the Earth and nearly 4 billion of them are already living without reliable drinking water supply today; a huge problem that is intensified by global warming. Around the world, researchers are developing new technologies for tapping sources of drinking water. Here are six of these developments.

Air is not nothing. Besides nitrogen, oxygen and other gases, water in the form of water vapour is an essential constituent of air — and the amount of it that is present in air varies significantly. On average, the water vapour content in the troposphere — the lowest layer of Earth’s atmosphere — amounts to around 1.4%. The tropics with around 3% water vapour content in the ambient air and the poles with just around 0.1% are two extremes. In the quest for new drinking water sources, researchers are now pursuing a strategy of harnessing this (invisible) humidity and have developed various technical methods for this purpose.

“Did you know that at any given time, the atmosphere contains 6 times more water than all the rivers on the planet together? […] Even arid desert air contains up to 40% humidity, especially at night.” — David Hertz, architect and inventor from California

How it works: Scientists at the University of Texas have developed a gel that can pull drinking water even from arid desert air using thermo-responsive cellulose — a material whose characteristics change, depending on temperatures. During cool nights, the material has the capacity to bind water. While being heated, the gel has a hydrophobic effect resulting in the release of the collected water. On balance, that’s a particularly energy-saving and easy-to-use method for any household. Just 1 kilogramme (kg) of the gel is said to cost only two euros.

Yield: In areas with relative humidity below 15%, just 1kg of the gel can pull about 6 litres (L)  of water from air per day, according to the US scientists. In humidity conditions of up to 30%, it goes up to 13L per day. Through further optimisation and thicker gel films, the amount of water can increase significantly, say the researchers.

How it works: Californian inventor David Hertz’s Skywater box uses the principle of condensation: When hot air touches a cold surface water vapour liquefies. The air is heated either by solar energy or biomass.

Hertz explains his invention: “We are creating a tropical climate in the box.” The process is equally simple and ingenious, enabling water to be harvested even in very dry conditions. The collected condensation is subsequently filtered and purified.

Yield: David Hertz has shown that with his boxes — small, discarded shipping containers — he can pull up to 2,400L of water from the atmosphere within 24 hours, using 100 percent renewable energies. His formula: The higher the humidity and the hotter the temperature, the more water can be harvested and filtered. “We are CO2-negative,” says Hertz, “meaning we sequester atmospheric carbon and turn it into biochar, a soil nutrient for regenerative agriculture.”

How it works: Preferably installed in dry mountainous and coastal regions with ample fog and wind, fog collectors are vertically suspended nets consisting of a special mesh (such as nylon) that catch droplets which subsequently merge into larger drops. Without any energy input, strictly due to the force of gravity, the drops fall into a gutter, from where the fog water flows through pipes into a collection tank. Drinking water has been harvested by means of fog nets for many years and, in some cases, for decades.

For instance, the WaterFoundation, an independent Munich-based organisation, offers such a product named CloudFisher. Fog nets are used in Bolivia, Morocco, Peru and Tanzania, for example. Chile, Ethiopia, Spain or South Africa are suitable for fog nets as well.

Yield: The daily water yield ranges between 6L and 22L per square metre (sqm) of netting, depending on the region and season. According to the Munich Re Foundation that supports projects for harvesting drinking water in poverty-stricken regions, hundreds of thousands of people are currently benefiting from fog nets. In addition, the specialty mesh — supplemented by horizontally installed plastic panels  — serves to harvest water also during monsoon periods.

The largest fog collector is located in the Anti-Atlas Mountains in Morocco. On average, the fog netting harvests 22L per sqm per year. With 31 CloudFishers (1,586sqm of netting area) installed, that amounts to 37,092L  per day of fog, providing a daily water supply of 12L per family member to 16 villages with around 13,000 inhabitants. 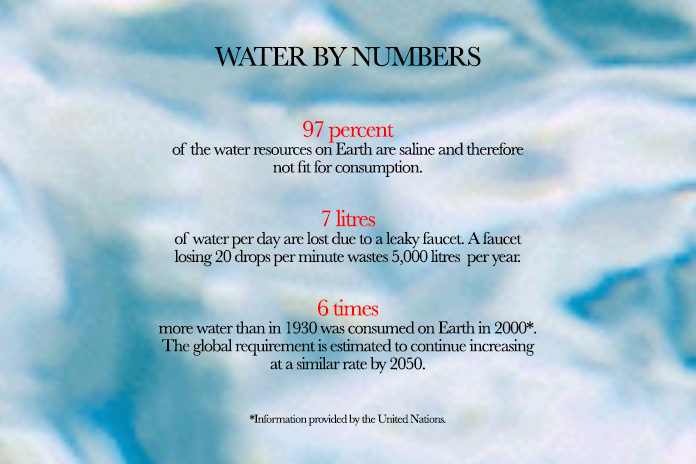 Drinking-water from the ocean

The world population is growing and so is its thirst. The solution to this problem, it seems, is obvious: 70% of Earth is covered by water. If it were possible to tap this huge supply, humanity’s water problem would be solved instantly. Or perhaps not? In fact, hundreds of millions of people, worldwide, already depend on classic seawater desalination plants, while researchers are working on more profitable, sustainable and individually usable methods of removing salt from water.

4. Drinking Water At The Touch Of A Button

How it works: Converting saltwater into drinking water is not rocket science. However, that hasn’t been true for private citizens so far because they would need special filters combined with powerful high-pressure pumps. That’s far too complex for the average consumer and prompted a project by a research team at the renowned Massachusetts Institute of Technology (MIT) that claims to have developed a foolproof suitcase-like device for producing drinking water out of saltwater — without any filters but with electric energy and at the touch of a button.

The process applies an electrical field along membranes above and below a channel of water. Positively and negatively charged particles are thus repelled by the membranes while flowing past them and “filtered out”. In addition to the salt molecules, this also affects other undesirable components such as viruses and bacteria.

At MIT, they call this specialised technology ion concentration polarisation (ICP). In a second step, a so-called electrodialysis takes place, which removes any remaining salt ions.

Yield: The researchers expect to harvest potable water that exceeds even the quality standards of the World Health Organization (WHO). In the field, this is supposed to take barely 30 minutes, according to MIT.

How it works: In the Netherlands, vegetables normally grown in warmer climates are cultivated in greenhouses. In the desert, the Norwegian NGO, Sahara Forest Project, reverses this principle to produce food crops where it is too hot and dry. Their idea is to pump salt water into the Sahara that vapourises in greenhouses where it absorbs heat and thus cools the greenhouses. The intended final product — practically a byproduct — is clean water because the vapour that condensates on the walls is collected and after another purification process becomes drinking water. The necessary energy is supplied by solar systems. The project was initiated as far back as 2008 and pilot projects have since been launched in Qatar and Jordan.

Yield: In an initial project phase, in which the plantations extended across an area of three hectares, 10,000L of fresh water per day were produced by means of desalination using solar energy.

6. Drinking Water From The Seafloor

How it works: A global assessment by the GEOMAR Helmholtz Centre for Ocean Research in Kiel revealed that around the globe huge freshwater reserves are hidden in the groundwater, referred to as “offshore freshened groundwater” (OFG). The crucial question is whether we can also use all these reservoirs as drinking water sources.

So far, the scientists have not been able to clarify which limestone rocks that store the groundwater like a sponge at a depth of down to 400m are already connected to land. Dr Aaron Micallef at GEOMAR is optimistic, though: “The results we obtained so far are encouraging because we have been able to map OFG in very different geological settings and gain detailed knowledge on how it was deposited.”

However, the study also identified important gaps in the scientists’ understanding of OFG such as the timing of deposition and whether recharge is currently taking place. “This information is crucial if we want to assess the potential use of OFG as an unconventional source of water,” concludes Micallef.

Yield: For the study, the research team evaluated a total of 300 documented records of OFG. They estimate the global volume of these deposits at 1 million cubic km. That is about twice the volume of the Black Sea and about 5% of the estimated global volume of groundwater in the upper 2km of the continental crust. The deposits are mainly located in areas up to 55km from the respective coasts and down to a water depth of 100m.

One of the focal research areas at the Chair of Sanitary Engineering and Waste Management is the supply of drinking-water: “Globally, around 70% of the resources that might become drinking water are used for farming. The efficiency of irrigation needs to increase in this area. In Europe, we virtually import water from regions in the world where irrigation is inefficient and where resources are excessively used, such as for cocoa, coffee or cotton.”

Untreated water, another major portion of the resources that could become drinking water is lost because it is discharged into bodies of surface water and pollutes the groundwater as well. “When even surface water is contaminated due to dyeing of textiles, they should not just be used briefly as fast fashion items,” he warns.

The same applies to mindful handling of food. “Foodstuffs that also account for a major part of our water footprint must no longer spoil or be disposed of to the extent that they have been so far,” Krause adds.

According to Krause, solutions such as CloudFishing, hydrogels or various innovative methods for seawater desalination would not only assist humans in harvesting drinking water but also benefit the environment as a whole — albeit only if negative consequential effects of the systems were avoided.

A UN study in 2019, for instance, revealed that, worldwide, per day, 142 million cubic meters of highly concentrated brine are discharged into the environment — far more than previously thought. That’s a serious problem because a major portion of the brine is just fed back into the ocean where it upsets the ecological balance.

Another problem, he says, is the high energy requirement of desalination plants. To put things in perspective — current, commonly used osmosis desalination plants consume 7 to 7.5 kilowatt hours of electricity per cubic metre of freshwater. Using green electricity in this area requires either an energy storage system to buffer the lulls of wind and solar energy or large water reservoirs for storing desalinated water at times when a surplus of green electricity is produced. Either variant would drive up prices.

This article was originally published in schaeffler-tomorrow.de