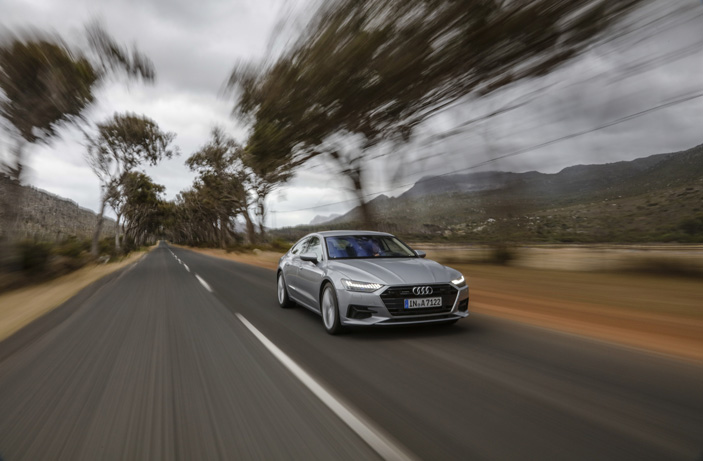 While this may detract from model uniqueness, it does allow for variations within a limited framework. Audi has achieved that with some degree of success, allowing the models to embody their own sense of self.

The A7 Sportback is a good example of this design philosophy. 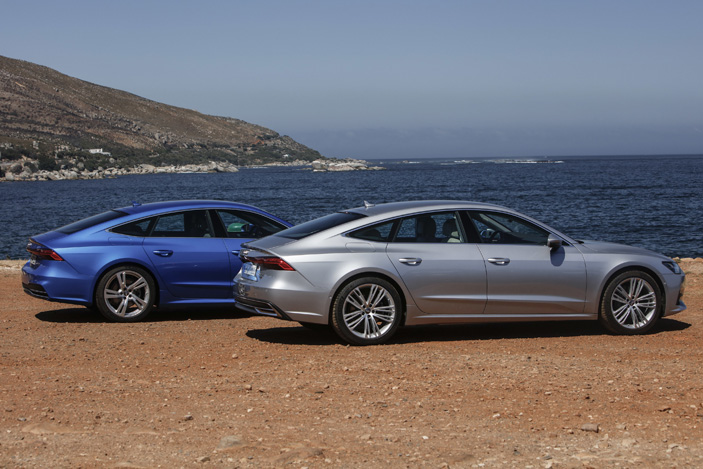 This large four-door coupe is many things rolled into one. It’s styled like a coupe with the sloping back, and is part of the group of cars that mocks the concept of the two-door car by giving it four doors. It takes the sporty form but has dimensions that are larger than most sports cars. It’s about performance, but not as you would expect.

Generous To A Fault

While it has the looks of a sharp coupe (even with four doors) its proportions are on the generous side. Just shy of 5m, it’s slightly shorter and narrower than its predecessor. That said, it’s been reconfigured so there’s more length between the wheels and a bit more height, which gives more knee and headroom. 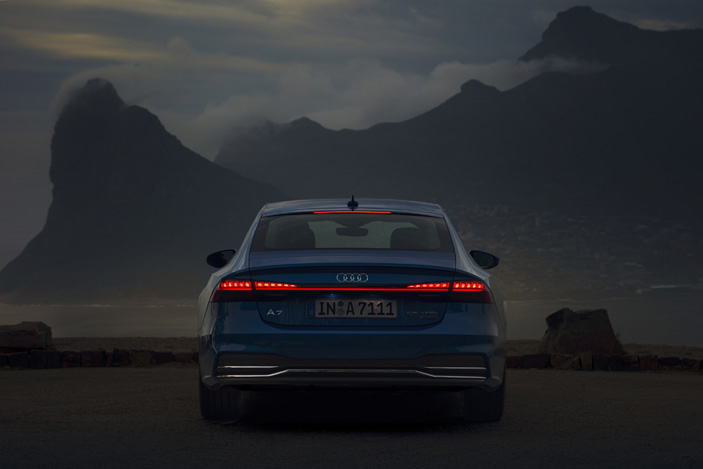 A minimalist approach has swept through the design of the A7 Sportback.

The external look is kept relatively fuss free, with a few folds and swells to accentuate key areas without going over the the top.

>>READ: Education – Change Is Coming And It’s About Time

Vertical light segments fore and aft serve to focus the attention on their unusual orientation, while keeping with the current trend of creating a unique look.

Duck your head as you enter, to avoid the sloping A pillar and settle into the driver’s armchair. In front of you is an array of dials and screens, meant to impress, which they do. 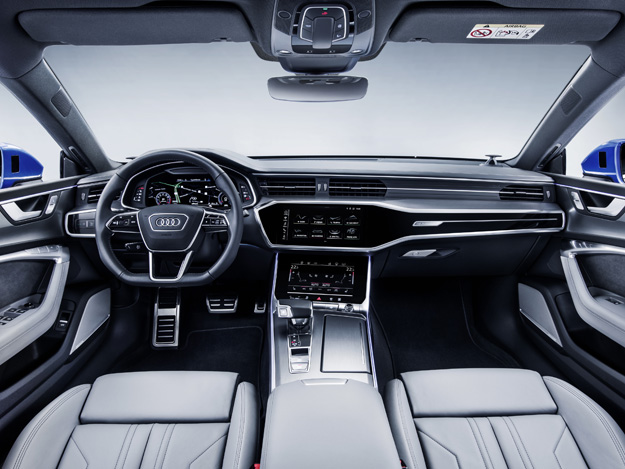 In keeping with the industry’s push towards connected motoring, you’ll find more bells and whistles than you’ll need. While this is not in keeping with the general “less is more” philosophy, you can appreciate that Audi, like most manufacturers, want to cover as many bases as possible.

Two touch displays in the centre console provide information — with that satisfying haptic feedback — on the state of your sound system to the air-conditioning. The virtual cockpit offers more options, and a head up display gives you information on the fly.

The Bluetooth is easy enough to connect, but dropped inexplicably, and had to be reset. But that’s electronics for you, hopefully something that will be resolved when autonomous vehicles are part of the motoring equation.

For a biggish car, it’s still a bit mingy with storage space. The door pockets are aligned too close to the armrest, and are too narrow, forcing you to contort your hand to get to anything. There’s storage in the centre, but as the wireless charging is also located there, your storage options are reduced. 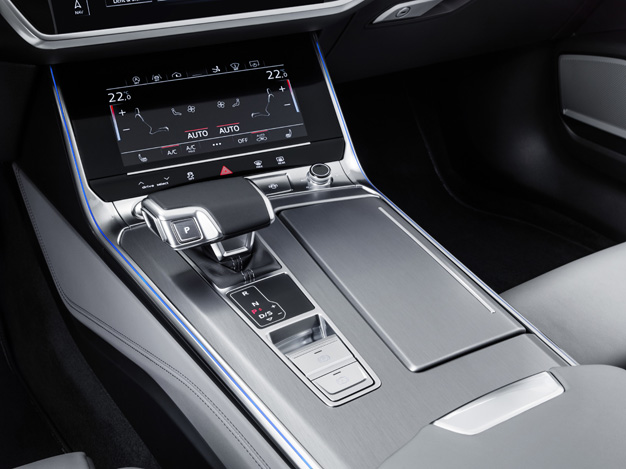 Control of vital information is on the steering wheel. While many Audi models let you change your driving mode via a button on the steering wheel, it is not offered in the A7 Sportback. What’s the rationale of not including that as a feature in a model called a “sportback”?

And while the gear shifter is moved to be near the driver, why wasn’t the driving mode selector on the centre console located nearer the driver in the right-hand-drive model?

Considering how much more we have to pay for vehicles in this part of the world, it wouldn’t hurt to pay more attention to the little details.

With a name like “”Sportback, you’d expect this version of the A7 to put its back into being sporty. But it comes through as too refined, even in Dynamic mode, that it’s efficient to a fault. 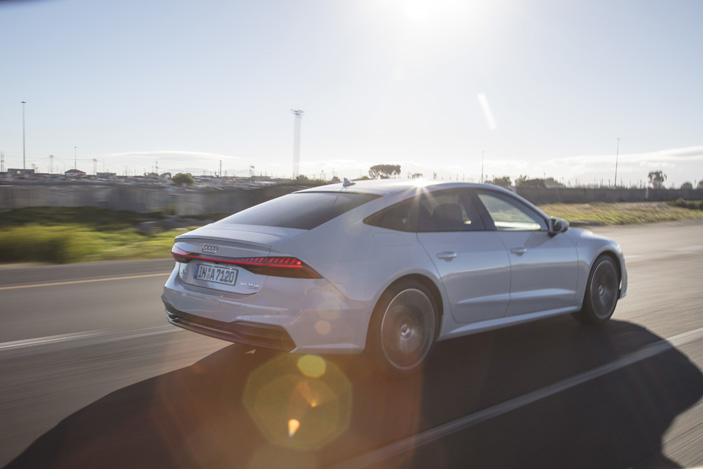 It glides from standstill to 100kmh in 5.3 seconds, which is fast, but the manner of delivery is almost devoid of emotion. It lacks the rush of the chase, dials back on the exhilaration, and comes across as a functional executive machine. The 3L is never short on juice, but you aren’t able to relish it.

It’s probably preparing the world for the era of autonomous vehicles where getting from here to there is about destinations and not journeys. Well, the next version of the A7 Sportback may want to consider giving enthusiasts something to revel in before artificial intelligence and all that sort of stuff takes over. 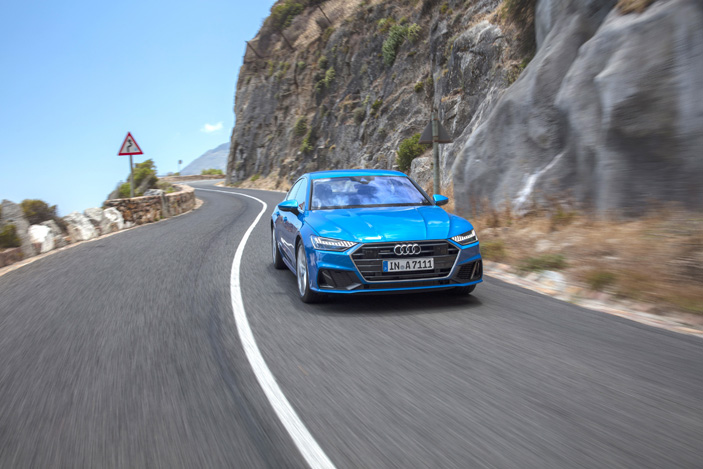