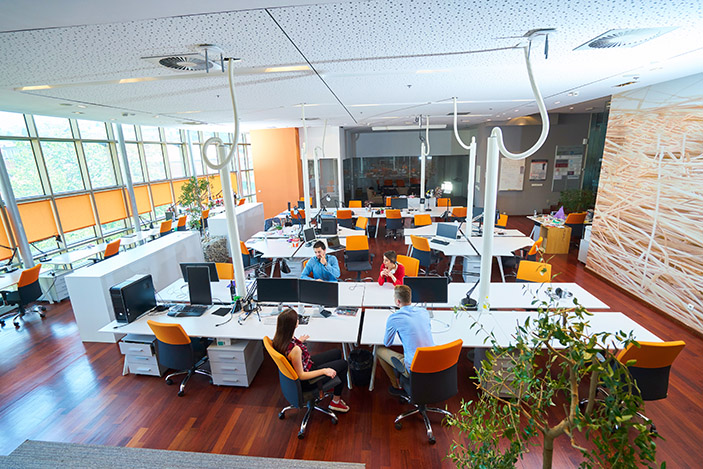 THE IMPACT of the noisy minority is something to keep in mind with all the noise being made about the rise of the commercial property sector.

Advertisements shouting “No Additional Buyer Stamp Duty!” and no onerous restrictions on loans will entice property investors to cross over from the residential market to the office market.

For the past year, most industry watchers have upgraded the Singapore office market to a buy, asserting that office rentals and office demand have turned the corner to clear blue skies and a rosy future.

But you may want to take a look at the bigger picture.

Broad market data does not seem to back up this assertion.

Vacancy rates hovering at the low teens in the past 6 quarters are at economic recession-levels last seen during the Lehman Crisis. 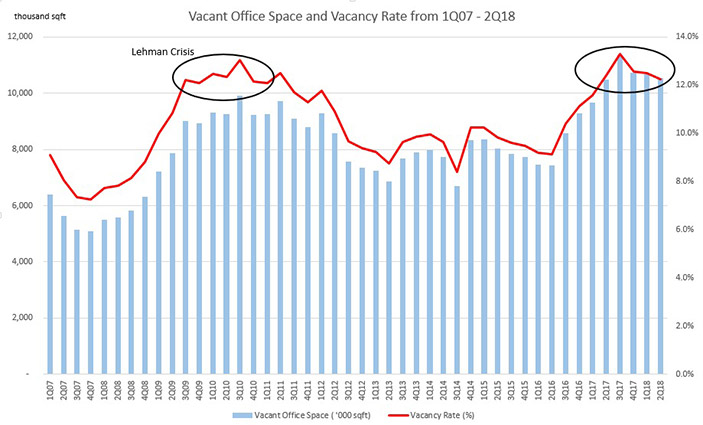 Dig deeper into the analysts’ bullish forecasts and we realise that the forecasts are focused purely on the Grade A sub-segment of office space in the core Central Business District (CBD).

Lower grade offices and office buildings located outside the CBD may suffer from weak demand, falling rentals and high vacancies, but no one tracks their performance and so the layman will not get to read about their prognoses.

A significant driver of office demand in the past 2 years came from co-working space operators.

In Singapore and the region, co-working spaces have proliferated, and is set to grow further. Giant private equity backed co-working space providers make for stunning headlines.

For example, WeWork plans to open one new office every three months over the next 18 months. JustCo is jointly investing US$177 million with Frasers Property and Singapore’s Government Investment Corporation (GIC) to develop a co-working space platform across Asia.

Flexible workspaces embodies the transformation of the work environment, with increased opportunities for workers to interact, shared-spaces to innovate and having a sense of community in the workplace. It also promises a more economical way for small companies to operate, saving money on office costs and utilising resources more efficiently.

A strong push by the government for innovation and entrepreneurship, the millennial mindset which is more tuned to collaboration, and a proliferation of start-ups riding on multiple technology waves, led to this sub-segment of office space becoming trendy and hip.

Suddenly, the office environment becomes livelier, as people get to meet other like-minded individuals and work together to brew and spawn new products and business ideas.

However, the co-working space concept has been around for decades. Its earliest version appeared in the guise of serviced offices with partitions and cubicles. It metamorphosed once during the dotcom boom era through business incubators and start-up accelerators. It recently morphed again, backed by heavy-weight venture money, with lots of hype, into open-plan layout offices hosting a range of occupiers who are members, rather than tenants, of the space.

How does co-working spaces affect the office market?

If the bulk of the increased demand for office space is attributed to the growth of co-working spaces, we should be more cautious about being overly optimistic that office market is turning up.

A co-working space operator may lease an entire floor in an office tower of, say 15,000 sqft. This space is immediately available for sub-letting, sometimes as cubicles and desks, but most commonly in the form of “memberships” where members or subscribers are allowed to use the co-working space for certain hours over the membership period.

Since the space leased by co-working operators is almost immediately available for lease again, the “demand” for office space shown in office market reports do not reflect actual office-user demand.

Due to the efficiencies gained from the “time-sharing” element of co-working spaces, similar to car-sharing, bike-sharing and home sharing, a 15,000 sqft co-working space may house as many office users as 45,000 sqft of normal office space would.

And to complicate things further, there is no definition or data available for the utilisation rates or occupancy rates of co-working spaces. Therefore, we are unsure of the magnitude of the impact that co-working spaces have on the traditional office market segment

Flexible workspaces beyond the office market

It seems that the competition facing traditional office spaces is not just coming from co-working space operators. Co-working operators are also found outside areas designated for office use.

For example, the National Library Board has set up Smart Work Centres (SMCs) which are co-working spaces in public libraries. These SMC are pay-per-use workspaces that are fully equipped with meeting rooms, video-conferencing facilities, Wi-Fi and photocopiers.

The drop in retail rentals made it viable for co-working space operators to lease spaces in shopping malls, for example Trehaus at Claymore Connect and JustCo at Marina Square.

Co-working spaces are also found in spaces designated for use as Business Parks and Light Industries.

This trend will have a small and negative impact on co-working space operators.

How will office landlords react?

For investors of small office spaces looking for SME tenants, the information above is clear: the office segment is seeing recession-level vacancy rates and there does not seem to be a light at the end of the tunnel for non-Grade A office space.

Perhaps lowering the asking rental, or quickly selling the office unit since the residential cooling measures might swing the less-informed investors to invest in office space, might be the way to go.

For owners of large buildings, several have already adopted the “if you can’t beat them, lease to them, or form joint ventures with them” policy.

The top-tier co-working space operators offer lease terms that require landlords to cover the costs of interior renovations and to take a share of the revenue.

How will this revenue be shared?

Furthermore, if we were to take a leaf from the books of the sharing-economy disruptors such oBike and Uber, once a market is saturated, the pull-out will be fast and painful.

Ku Swee Yong is a licensed real estate agent with International Property Advisor Pte Ltd and the Co-Founder of HugProperty.com. Hazel Tan is a future graduate from the Department of Real Estate, National University of Singapore.