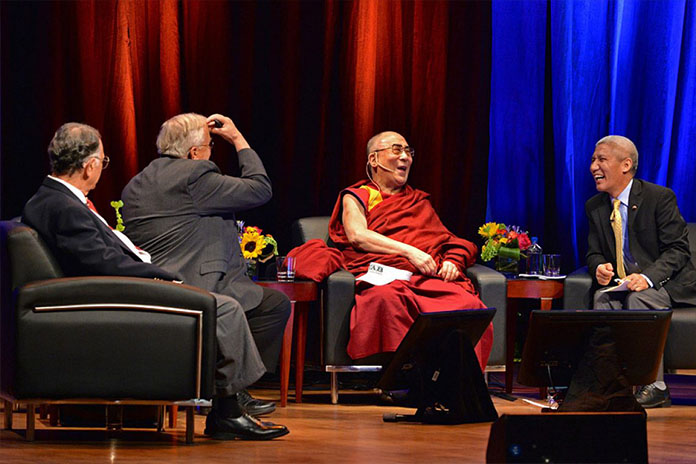 THE wisdom and peace-loving ways of the Dalai Lama have developed a strong following globally. His recent tour of the US brought him to Alabama, during Human Rights Week, where STORM met with him.

At the invitation of Mayor William Bell on the occasion of Human Rights Week, the Dalai Lama visited Birmingham, Alabama, in the US, in late October. A city of about one million, Birmingham was the segregated city in the ’60s where the civil rights revolution led by Dr. Martin Luther King eventually brought about the end of enforced racial discrimination in America.

A stateless refugee since the age of 24, the Dalai Lama, like Birmingham’s civil rights activists, has had first-hand experience of bigotry and injustice. But despite his share of harrowing challenges, what endears him to the thousands of people he meets is his warmth.

He effortlessly embodies the oneness of humanity he advocates: That as human beings, we are all the same. His wisdom, kindness and humility make you feel like you have come into the presence of pure goodness. And in your feeling of safety, you cannot help but join him in his gales of giggles and fits of laughter. It is almost impossible not to be touched and inspired by this tenderhearted man in maroon and saffron robes.

Humble Despite His Global Stature

Born on July 6, 1935, to a farming family in a small hamlet in northeastern Tibet, Tenzin Gyatso was recognised at the age of two as the reincarnation of the 13th Dalai Lama. At age six, he began his monastic education, studying the 322 volumes of the Tibetan Buddhist canon.

At 23, he passed with honours and was awarded the Geshe degree, the highest-level and equivalent to a doctorate in Buddhist philosophy. Since his exile to India in 1959, the Dalai Lama has travelled to over 67 countries. He has authored or co-authored over 100 books, and has received more than 150 awards, prizes and honorary degrees in recognition of his message of peace, compassion, non-violence, universal responsibility and inter-religious harmony.

In 1989, the Dalai Lama was awarded the Nobel Peace Prize for his continued advocacy of non-violence.

As a man of religion, the Dalai Lama is unique in his deep interest in science and its practical applications for the pursuit of happiness and well-being. “Now for nearly 40 years, I’ve developed genuine interest for modern science. I must add that Buddha stated that his followers should not accept his teachings out of faith and devotion, but rather through thorough investigation and experiment.

“So, naturally, a person who follows that principle will be interested in science. Science is also a method for investigating what reality is. Up to now, Western scientists mainly focused on matters like quantum physics. I always have a strong feeling modern science should include the study of the mind and emotions. So, over 30 years, we created the Mind & Life Institute, headquartered in Massachusetts. I find useful information from scientists about matter and things like the Big Bang Theory.

“I’m fully committed to modern science. I really admire genuine scientists because they are open-minded and unbiased. They try to seek reality. That’s good.”

The Mind & Life Institute is dedicated to the study of contemplative science. Since the 1980s, hundreds of experiments on the effects of meditation and mindfulness practices have been conducted by universities in America and Europe. Among the benefits of mindfulness are increased focus and a reduction in stress and chronic pain.

“Training the mind is not for the next life or heaven, or what Buddhists call nirvana. These things are simply for our present life.”

The Dalai Lama also outlined his three commitments. His first commitment is to remind people of the oneness of humanity — that seven billion of us are brothers and sisters belonging to the same human family. He noted that problems arise because people emphasise differences like race or religion.

On the other hand, ecological issues like global warming are Nature’s way of telling us that we must adopt a wider worldview and work together for our common good.

“When I meet people, I never consider myself as a Buddhist, Tibetan, Asian, His Holiness the Dalai Lama.

“I am just another human being. As humans, we all want to be happy and, occasionally, we have problems due to our emotions. My emotions sometimes create difficulties for me, too. If I act like I am someone special, I will be isolating myself and be lonely.”

The Dalai Lama’s second commitment is to promote inter-religious harmony while being mindful of the benefit millions of people down the ages derive from their religious faith, whatever it might be.

All major world religions focus on the transformation of emotions and mental attitudes that can lead to inner peace and tranquility. All religions have the same potential even though there are philosophical differences amongst the various religions. “Among human beings, there are many different dispositions. As such, it is necessary to have different religious approaches for different people.”

Touching on his third commitment, the Dalai Lama pointed out that according to some reports, there are about one billion non-believers today. Since we are all human brothers and sisters, with the same aspiration and right to be happy, he says we can achieve unity through secular ethics that is based on the common experience of having been given birth to by our mothers.

He also advocates common sense principles — that the real source of happiness comes from within us through qualities like love and compassion, and scientific findings for instance, and that mindfulness practices lead to changes in the brain that result in less stress and lower blood pressure.