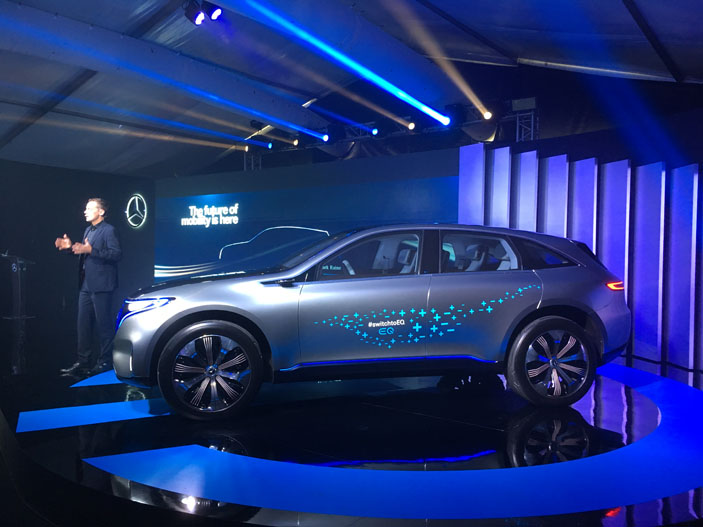 THE inventor of the automobile has finally flicked on the switch for its electric vehicle (EV) production.

Last week, Mercedes-Benz added a dose of its own electricity to the politically charged atmosphere of Kuala Lumpur, where the frenzy of a general election dominated the news.

The EQ concept vehicle was in the Malaysian capital to raise awareness for the new EQ brand and EVs as part of our future. The new brand will keep AMG and Maybach company in the Mercedes brand portfolio.

One could argue that Mercedes-Benz, as the inventor of the automobile, is trailing some of the other major manufacturers who are well on their way towards developing their EV fleets. Perhaps Mercedes-Benz has adopted Apple’s successful approach — don’t be at the bleeding edge, and let the others make the mistakes.

Learning from one’s mistakes is a smart strategy at a time when fickle audiences are becoming less forgiving.

The EQ brand will be at the vanguard of Mercedes-Benz’s push to the next level of the industry. The new brand within the Mercedes-Benz family is being primed for greater things, and has been parachuted into pole position.

“By 2025 we would like to see electric cars accounting for 15-25% of our sales,” says Dr Claus Weidner, President and CEO, Mercedes-Benz Malaysia.

China is expected to be its largest market.

Playing on the IQ/EQ relationship — EQ is often associated with “emotional quotient” or “emotional intelligence”, as opposed to IQ (intelligence quotient) — Mercedes-Benz is hoping to capture hearts with the use of logic.

While it displays liberal doses of IQ in the concept car, it is not exactly endearing on the EQ front.

The silver and blue with white highlights on the EQ Concept car are often the colours associated with things electric. BMW started it with the i8 and i3, adding elements to reflect sustainability as part of their larger narrative.

On the EQ Concept car, the silver form offers some flashes of dashing expression — the blue lights on the grille (Will the transportation authorities allow this?), the slim rear lights, and cameras for wing mirrors — but is otherwise clinical in its delivery.

Lessons On The Run

Life On An Aircraft Carrier

In all that glass and metal, it’s purposeful and pushy and doesn’t offer much by way of welcoming warmth or fuzziness.

Perhaps its design has been influenced by the rapidly approaching autonomous driving environment we are starting to embrace as part of the growing sharing economy.

“Mercedes-Benz has the biggest shared mobility platform in Europe with Car2Go,” points out Dr Weidner.

In the sharing economy, the car doesn’t belong to you, and doesn’t have to reflect who you are, so car manufacturers can adopt the Model T Ford approach — it can be any colour, as long as it’s black. Or in this case, alubeam silver.

As a concept car, there is still wriggle room to make changes before production begins, within a couple of years. They may not be major fixes since the concept car would presumably have been put through rigorous rounds of reviews and tests.

The EQ badging is already tagged on to some of the hybrid models. The C350e and E350e models available for test drive in Kuala Lumpur offered the expected Mercedes-Benz comforts, but on full electric mode, only delivered around 30km in city driving.

A slight mishap with the C350e we were in — a power steering malfunction — necessitated a change of vehicle, but it was otherwise a well-balanced ride, indiscernibly shifting between drive modes.

The Concept car, when realised, is expected to have an output of 300kW and a healthy range of 500km. Some of the concerns associated with EVs are being aggressively addressed with the EQ.

This new generation of EVs will be based on an architecture developed specifically for battery electric models, thus making it scalable and modular.

With the battery accounting for around 30% of the cost of the car, a lot of research continues to be injected into this area of development. The aim is to make them lighter, easier to charge and able to power cars for longer distances.

See also  Bring The Metaverse Into Your Business