THE CENTRE of attraction at Firebake must be its oven. Besides the wonderfully aromatic bread that is made in it, it’s about the investment of time and energy, and the detail that went into its installation that make for a wholesome tale.

Konstantino Blokbergen, who is behind Firebake, believes this is probably the first oven of its kind in Singapore. This 37-ton handbuilt oven can produce 600 loaves of bread a day, and can get up to 1,000°C.

The wood-fired oven requires neither gas nor electricity, and this old-world feel is reflected in the restaurant, where vintage stoves are used to cook up the dishes that complement the bread, explains Konstantino.

He has been working on this project for some time now, but was searching for a location that would allow the concept of a bakery with a restaurant to come together. 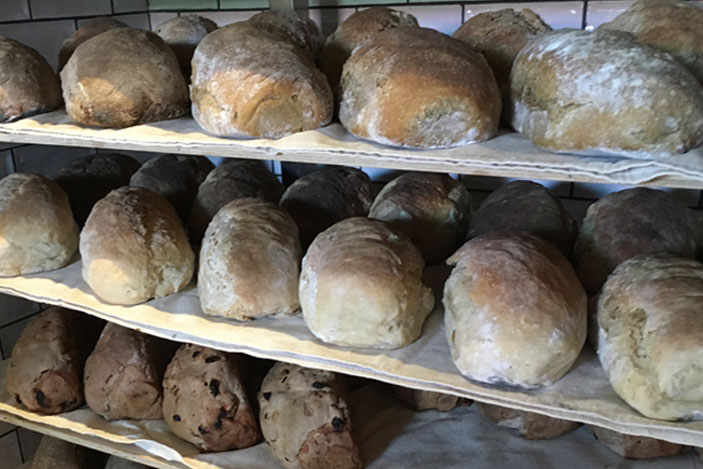 Konstantino had first seen the bakery concept in Margaret River, in Western Australia some years ago. The Yallingup Woodfired Bakery seemed a good idea to introduce to Singaporeans, who like new and fresh concepts, especially if there are elements of healthy eating involved.

Firebake wants purity to be the purpose of its existence. And that means finding the purest grain from Western Australia to create the four types of organic sourdough bread — The Wave (white), The Field (wholemeal with caraway seed), The Valley (cinnamon and fruit), and The Rock (rye and caraway seed).

Much of Firebake’s existence hinged on finding the right landlord. When B Capital Asset Management acquired the corner unit at the junction of East Coast Road and Lorong Stangee, it seemed destined that Konstantino, who lived within strolling distance, would set up shop here.

It is estimated that most new restaurants would cost around $500,000 to set up, with no guarantees on a return on that investment. So, there’s a need to have that unique selling point before you embark on this venture.

Firebake sits where the old Carlton Restaurant used to be. The second and third floors of the building are for yoga, and there’s a rooftop that can be used for events. 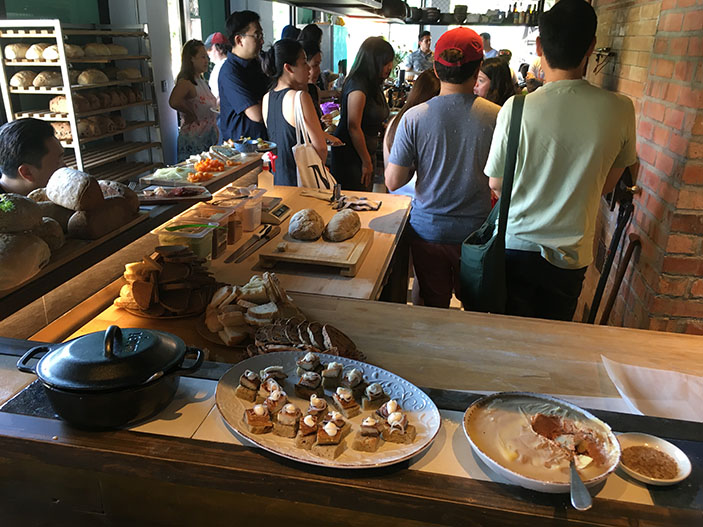 It took around two months to build the oven and kitchen. Gotthard Bauer, the proprietor of Yallingup Woodfired Bakery came across to offer his expert advice, having built nine such ovens in Australia.

While the aromatic soft bread forms a tasty base upon which the menu is built, much of Firebake’s difference lies in the importance it accords the cooking process. Open top cooking on vintage stoves and the oven fitted with volcanic stone slabs help to whip up flavourful Norwegian blue muzzle, Rangers Valley striploin, prawn capellini and a delicious bread and butter pudding.

Where Do Chefs Eat?

The ambience helps, too with a combination of indoor and outdoor dining options in warm, earthy tones. The average check is around $35 and there’s a special beer, water, coffee — hot and cold — and wines, of course. 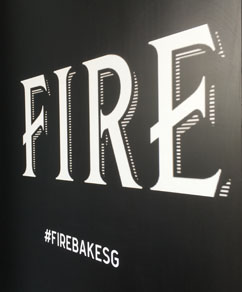 In April, when the restaurant opens from breakfast to dinner, Konstantino wants to introduce gluten-free bread and tweak the menu. “There may be seasonal breads that will come and go, but the four breads we have are the foundation stones,” he adds.

While many restaurants are built around existing concepts, Firebake brings freshly baked ideas to the dining scene.