THE ONGOING quest for health and healthy eating could result in a negative reaction. Something to be nervous about…?

Psychiatrists have declared a new mental disorder — and why not, since it’s their livelihood? This time they go after people who are overly concerned about eating healthily.

The term “orthorexia nervosa”, which is Greek for “fixation on righteous eating” was coined by Dr Steven Bratman in 1997. As someone who suffered from the malaise and wrote a book about it entitled Health Food Junkies, the ailment can ironically lead to malnourishment and death.

This has got people in the health foods business up in arms. What can be more ridiculous than becoming malnourished from trying to eat healthily? Yet there are people who wonder if we are, indeed, becoming unduly obsessed with health.

Are we health nuts?

Meanwhile, you can get your spine alignment assessed at shopping malls by chiropractors and your bone density measured along HDB corridors by ladies without white coats.

What Is Singapore Literature’s Story?

On buses and trains, we may notice people with circular red bruises on their arms and backs, a sign that they have had cupping — a form of traditional Chinese medical treatment that uses vacuum suction cups to draw out “wind” from the body. Every corner you turn, you see evidence of healthy pursuits.

So what’s happening? Have we become a health conscious nation?

Consider your friends … out of 10 or 20, how many actually go out of their way to eat and live healthily, say, by eating mainly home-cooked meals, avoiding food chemicals and sugar, and so on? How many eat organic and whole, unprocessed food like brown rice? How many actively read up on health issues?

The numbers probably get higher when you include those who pop vitamin pills. But that’s a shortcut — and arguably misguided — route to health. And surely you know some who jog, run or cycle. Yes it’s even quite common to see women carrying pilates or yoga mats on public transport these days. But exercise is more about fitness, which is just one aspect of health.

If you exercise and eat junk, sorry, you still have high chances of getting seriously ill.

Now consider this…Boulder, in Colorado, USA, has a population of about 100,000 and at least three natural and organic foods supermarkets. Singapore, with more than five million people, does not have one. Even in Johor, the organic foods section of Aeon supermarkets is much larger than those in Singapore. Well, maybe that’s because retail space is cheaper in Johor.

Whatever growth Singapore has seen in health consciousness has been from a really tiny base. Moreover, much of that growth is led by businesses hoping to make big money. The profit margins can be tremendous.

And many health products are targeted not so much at the health conscious, but at those sick with life-threatening illnesses like cancer. Perhaps this reflects a sickly, rather than health-conscious society.

To begin with, healthy practices are not the norm and so they naturally appear strange. If you take your own brown rice to eat at a hawker centre or restaurant, you can expect a few raised eyebrows.

My first introduction to natural health was via vegetable and fruit juices and I started off drinking several mugs of carrot juice per day. My colleagues thought me crazy. Yet I can bet you, no one will say a thing if you drink several cans of soft drinks, or several cups of coffee, a day. Norms define what’s “normal”.

Yet I, too, had encountered some whom I thought more neurotic than I. The most memorable was when I was running a natural and organic foods store. A customer had picked up a packet of dried mushrooms and asked if it was organic. When I said “No” she nervously threw it back into the bin, as though it was poison.

The next two I only heard about…. One was a man at a cocktail party who ate only fruit dipped in volcanic ash (which he carried with him). Another was a Singaporean girl who was wearing two layers of clothing under the hot sun because she felt cold. She was following a raw food diet of salads and juices. 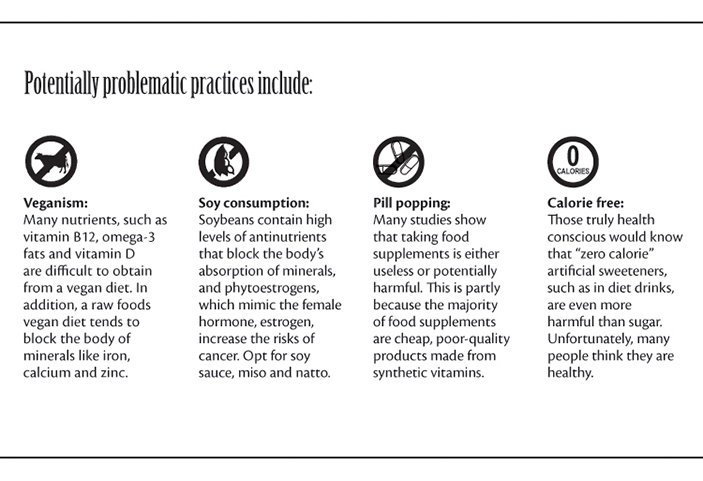 Things get weirder behind closed doors. At one stage, I had my bed positioned diagonally across my bedroom in order to sleep in a North–South orientation. It’s supposed to charge the body with the Earth’s magnetic energy. While you may not want to do this, I highly recommend that you sleep without your mobile phone. Do not use it as a clock or alarm. Leave it outside your bedroom. You will have sounder sleep.

Some practices I have not tried and do not recommend include drinking one’s own urine and “drinking” coffee from the other end of the digestive tract — a detoxification procedure called coffee enema.

Strange behaviour indeed. Will it lead to malnourishment and death? The possibility cannot be ruled out. Because many so-called health practices are not truly healthy.

So the psychiatrists may be right. There are certainly obstacles and pitfalls in the pursuit of health. But food in general, is mild, and eating the “wrong” food will not likely produce as serious side effects as, say, taking mind-altering psychotic drugs prescribed by psychiatrists.

Is There A Solution?

The solution is to keep learning and seeking to understand. Personally, my own understanding of what’s healthy has changed quite drastically over the past 30 years. The most recent moment of enlightenment occurred about 10 years ago, when I found out that saturated fats and cholesterol are, in fact, good for health.

If you cling tightly to a health dogma and ignore whatever signals your body sends your way, you could well end up sick — with orthorexia nervosa.