THE IMPENDING 3Q launch of Lu International in Singapore is a highly significant development.

Technology is disrupting industries across the board and the wealth management industry is no exception. For instance, in Singapore, we have seen how badly retail sales have been hurt by more and more people switching to online shopping. This is a global trend, driven by consumers’ desire to find the best prices for goods and services. The internet allows for instant comparisons to be made on prices and consumers respond accordingly.

This entrenched habit of searching online for goods and services will soon extend to the financial services industry too. Although there are some specific factors that make investing in financial products somewhat different from buying a dress online, the motivations are similar. In local parlance, consumers and investors both look for “something cheap and good”.

There is an added push factor in the financial sector for digital engagement as regulators in the region, like the Monetary Authority of Singapore (MAS), are increasingly encouraging citizens to mobilise their hefty savings and invest in riskier products. The aging dynamic and lengthening longevity in Asia mean that retirements will last longer, and more money will be needed to fund this.

The Singapore-based Lu International will initially offer simple fund products. This product strategy reflects how Lufax first started in China in 2011. It sold only a handful of financial products for more than a year before it started to gain serious traction with Chinese investors. The co-chairman and chief executive of Lufax, Gregory Dean Gibb, told reporters that Lufax now carries 3,000 products and has assets under management totaling US$60 billion in China.

While Lu International has obtained in-principle approval for a capital markets services licence from the Monetary Authority of Singapore (MAS), the licence is an offshore one, meaning it can’t sell its products to domestic Singapore customers. While Lu International’s target market are Chinese nationals who have offshore accounts, Gibb said that the emerging wealth in Southeast Asian markets is also attractive.

Like its Chinese counterpart, the Singapore platform will be open-architecture, meaning that Lu International will not only be featuring products from parent, Ping An Group.

This appears to be the favoured route for wealth management platforms because end-customers typically want to see a diversified range of financial products from many different companies rather than just one company.

It is evident that wealth management platforms allow offshoots of major financial sector incumbents like Ping An to position themselves to compete with upstarts with more of a technology background trying to work their way into the financial sector with similar wealth management platform offerings. The space is so new that Gibb is unsure who his main competitors are, citing Google and Amazon as potential rivals.

Wealth is growing faster in Asia than any other region in the world, and this is attracting more and more players into the region’s wealth management industry. And a financial sector heritage is no longer a prerequisite.

Technology-enabled fund product distribution channels like wealth management platforms are ostensibly more transparent on fees and easier to regulate. A natural extension is the use of robo-advisory services to draw more people to invest. Gibb said that robo-advisory services may also be injected into Lu International at some point. MAS is interested in this space to and is likely to encourage such developments.

The presence of Lu International in Singapore is a timely reminder of how technology has enabled many previously unknown Chinese companies to move directly into the financial digital marketplace. A joint report by DBS Bank and Ernst & Young released late last year noted that although China may have much less extensive physical banking infrastructure compared to the US and Europe, its digital infrastructure is far more mature, with a population ready and able to use their smartphones for mobile banking.

It added that by end-June last year, 656 million, or 92.5% of internet users, were going online via connected devices.

While the report noted that the use of online services for personal wealth management needs is still small compared to their use for payments/remittances and lending, it is likely to be an area of strong growth, as reflected by Lufax’s own progression since it was launched. 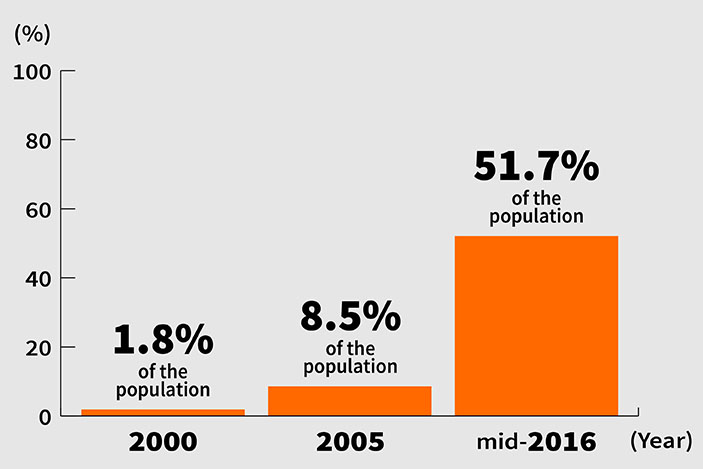 Now, by positioning Lu International in Singapore, Lufax is at the doorstep of another huge market, namely Southeast Asia.

However, it may not be as easy to gather assets from Southeast Asians as it appears to be in China. Countries in the region are each at different stages of their financial sector development, with regulatory oversight, financial infrastructure and distribution channels still moving at different gears. The performance of Lu International in the coming months will be a good barometer for how the regional financial digital marketplace is evolving.