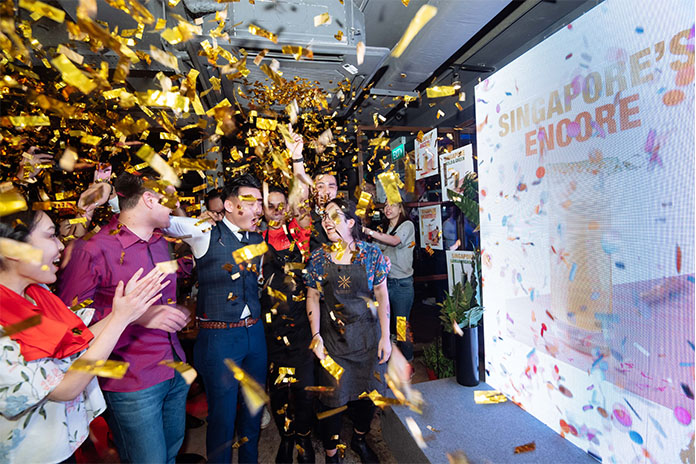 THE Singapore Sling was conceived in 1915. It provided a reason for ships to dock and bags to be unloaded at the Raffles Hotel.

More than a century after its birth at the iconic Long Bar of Raffles Hotel, it has quite possibly accomplished what it set out to do — to be the shining jewel in the Singapore crown.

Fast forward to today, Singapore has way more icons as part of its cityscape. It’s a mixed bag, some neat, others grotesque, but they all plant the flag firmly.

The Sling’s birthplace, the reopened Raffles Hotel, after millions of dollars of renovation, remains constant, which hints of a stagnation of ideas more than a nostalgic reflection, but that’s another story.

But what of the Sling? It is fitting then, to reconsider if the Singapore Sling can continue to hold its significance as an iconic cocktail. Sadly, most Singaporeans now hardly appreciate it. It’s been commercialised and will probably hold its place in memory for a little longer. Or at least after one more generation of Singaporeans is spirited away.

With so many mixologists about, it shouldn’t be a surprise if a new brew will be raised as a fitting toast to Sir Stamford Raffles in this bicentennial year of Singapore’s founding.

Might take a few drinks to convince anyone Singapore wasn’t already in place and serving a vital role before 1819. But that’s the advantage of being the one writing the history books.

The past 100 years have seen monumental changes to our cuisine, and our palate has been tuned accordingly. Chili crab, fried Hokkien noodles, char kway teow, all part of a cuisine we have come to realise as uniquely ours, have been variously modified and improved. Salted-egg, rojak and nasi lemak flavour various cuisines — from burgers to even gins!

Hence, we found ourselves at the Johnnie Walker Gold label event: The Search for Singapore’s Next Iconic Cocktail.

A total of 7 finalists made it to the voting stage and we had front row seats to watch the mixologists recreate an essence of Singapore in a cocktail. After tasting all seven drinks, voters were given the opportunity to pick their 2 favourites, and the winner crowned Singapore’s Next Iconic Cocktail.

Happy to report, after several wonderful glasses of Johnnie Walker Gold Label cocktails, that our top pick was also the clear winner in garnering the most number of votes.

Singapore’s Encore by The Tippling Club was rather unassuming in terms of looks. Clear with only a yellowish tint, it was made with Johnnie Walker Gold Label Whisky, cordial of rojak (yes the famous dish we all know), tonic water and garnished with a slice of cucumber.

Full disclaimer, we did not read through the ingredient list before we tasted it. That’s what made it so amazing. The fact that we recognised its taste at the onset and went “Oh My God! This tastes like rojak!” was a testament to the perfect execution of the creation of this wonderful drink.

Weirdly, we never expected that rojak in a glass of alcohol would taste as good as this. The taste was distinct and refreshing, not overpowering. Truly deserving of being Singapore’s next iconic cocktail.

While it did not get the maximum number of votes, our next choice was clearly a winning contender in our minds. As unique a drink as Singapore’s Encore.

True to its name, the Singapore Lemak Highball turned out to be a pure essence of what goes into Nasi Lemak — the fragrance of pandan and coconut milk coming together. Here, Johnnie Walker Gold Label was the base that dissolved the flavours of coconut pandan soda, together with passionfruit, pineapple syrup and calamansi. The cocktail was garnished with sambal and the chili anchovies (ikan bilis) and peanuts that we would expect to get with the dish.

Interestingly, the drink gave sweet notes of pandan and coconut, which had some semblance to the dish. Yet, the drink itself was missing something until we tried it together with the sambal chili smeared on the rim of the glass. An unexpectedly amazing combination, the light tingling from the spice completed the drink by giving it a zing. Well played, truly well played.

If the objective of this exercise is to get the new “Singapore drink” then it has to spread from here. For now, it will be available at these outlets — Tippling Club, Neon Pigeon, Fry Bistro , Taki Taki, Jekyll & Hyde, Muffinry, Blue Mist, Chug Chug, 18 Hours, Birds of a Feather, Haruyuki Izakaya, Wine Mansion, Sum Yi Tai, Mona Lounge, 6 Grey Bar and Gin and Don Ho. Tippling Club will sell the drink at $25++.

But if there are any plans to overtake the Singapore Sling, a lot more needs to be done.

Is the Singapore Tourism Board going to get behind the winning drink?

Johnnie Walker, with all the money at its disposal should help Singapore’s Encore get encore performances everywhere by helping it walk the talk!