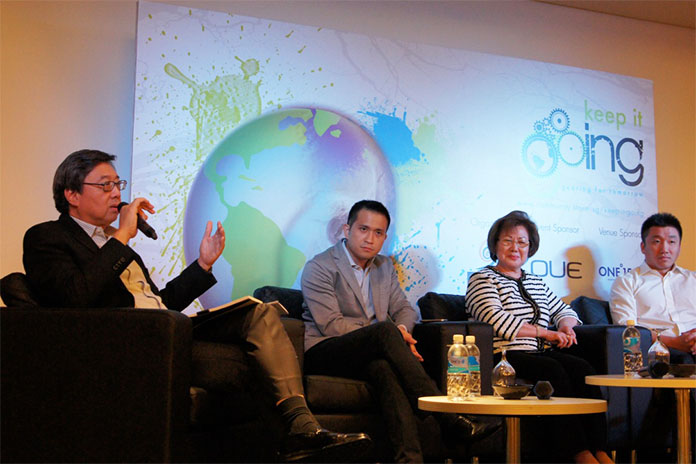 HOW do family businesses Keep It Going?

How can they avoid the dreaded 4Ds that lurk, ready to pounce? Keeping It All In The Family…? brought onstage members of family businesses in various generations of participation to share their experiences with moderator Richard Eu, CEO of Eu Yan Sang. As part of STORM’s inaugural sustainability programme, Keep It Going, the lunch audience of around 200 readers and partners of the magazine enjoyed a revealing and entertaining session.

As the business world gets driven more and more by multinational corporations, it’s always nice to see thriving family businesses in the mix. They tend to soften the corporate landscape, lending it a bit of sentimentality and soul to an otherwise cold, hard and calculating environment.

Family businesses, however, often face a dilemma. To sustain the venture beyond the first couple of generations, they invariably have to start behaving like well-established corporations on issues such as corporate planning, governance and succession. As they do this, the “family” part of the business can become somewhat diluted. You could say that the longer family businesses survive, the more they tend to look like any other corporation in terms of how they are run.

Still, putting structures in place that formalise a family business is not an easy task. There is always resistance, especially in Asia, as the founding family members of companies often believe they know best, and that only they can do the best job. But as a family business grows, tipping points are reached. Ng Siew Quan, a partner at PricewaterhouseCoopers, describes challenges to a family business’s sustainability in terms of scale, skill and succession planning. “Many family businesses cannot survive in the longer term because of scale. There are two reasons for this: the inability to internationalise the business and access to financing,” he says.

Ng also identifies a skill gap that must be overcome. He says as a company grows bigger, family members may not have the “bandwidth or skill” to deal with some of the new issues that come up. This puts them under pressure within the organisation to perform and can precipitate anxiety and  conflict. But he adds that the area where the most conflicts take place is in succession planning. “Succession planning nobody will do. Nobody will talk about formalising things or getting a proper structure of governance. It’s important to fix this before something goes wrong. When the sun is shining, fix the roof,” he advices.

It’s sound advice to set the rules and structure in place before anything goes awry. Such rules incorporate shareholder provisions, exit agreements and entry provisions for family members as well as the introduction of family councils. When such rules are in place, the family business becomes more transparent, which is positive for owners, management and employees.

“It takes away a lot of emotions,” notes Ng. One family-owned company that has a family council in place is Royal Selangor. Its current shareholders are from the third generation, and because there are only four of them (equal partners), it is still quite easy to handle, says executive director Chen Tien Yue. He is from the fourth generation, which comprises 11 cousins including him.

All but one of the cousins have been involved in the family business at some point. The inevitability of fragmentation in the shareholding in the fourth generation of Royal Selangor has been addressed somewhat with the establishment of a family council. “Six members get elected every three years. The family council will represent the family’s needs,” notes Chen. He adds that family members can have their say when the extended family goes on their annual holidays, but after that, the council is in charge of all matters.

Royal Selangor seems to be a company that is well advanced in the corporatisation of a family business. Nonetheless, it’s careful not to lose the family aspect of its business as that is integral to its brand. “A family element is nice for a consumer brand like ours because it’s about craft and about artisans who have been in the business for a long time. The fact that we have a family involved is an important part of the brand identity,” adds Chen.

This focus on the family element is also key to the success of Atlas Sound, a leading audio-visual retailer in Singapore. It’s probably best known as the agent for Bose sound systems in Singapore. Back in 1987, the company almost went bankrupt, but it was an adherence to family principles that kept it afloat. “I told my husband money is not the issue. It’s the integrity, the belief in your people, the belief in yourself and the belief in God. And God really gave us a second chance,” says Jeannie Tien, who started the company in the early 1960s with her late husband AB Tien.

They also got help from the late Dr Amar Bose, the founder of Bose Corporation.  “During our downturn in 1987, I told Dr Bose he could take back our agency because we couldn’t afford to order the way we used to order. He told made that if I thought that way, I am not his family. He said I treat you like a family member. You can buy whatever you want, take whatever you want, and pay when able. I told him thank you so much, but I will pay you exactly the way that I have been doing. And that has gone on for all these years,” says Mrs Tien.

She attributes the sustainability of her company, which is now run by her son, Michael, to people. As she explains: “First, I had my husband, who I was able to depend on. He treated everyone like his own and set a good example for us. Then our staff, my children and most importantly, our principal (Dr Bose). He treated us like a family.” Mrs Tien has been semi-retired since her husband died of leukaemia in 2003, stepping aside for her son, Michael. For Atlas Sound, the succession was pretty straightforward as the elder Tan was diagnosed some time before and Michael knew the business well.

Thrust Into The Chair

It wasn’t as straightforward in the case of Continental Steel when Melvin Soh’s father, who had founded the company, died suddenly in 2006. Soh was working in a private equity firm in Hong Kong at the time. “Life changes overnight. I came back after living alone for nine years, to a life with the family in Singapore. My aim was just to keep the business going. I thought to myself, don’t mess it up and don’t make funny plans. If it’s profitable, let it roll.

“New ideas are great, but old ideas, if they work, are better,” says Soh.

It’s still relatively early days for him in the family business, in which he is now a majority shareholder with his mother, but things are going well. He takes inspiration from his late father. “One of the guiding principles that I use is this: If I were my Dad, would I do this or would I do that?” notes Soh. As in Soh’s case, Death is one of “the four Ds” that can lead to serious challenges for family businesses and have an impact on their sustainability, points out Ng of PricewaterhouseCoopers. The other three Ds are Disability, Divorce and Departure.

Interestingly, going through a traumatic moment looks to be a common theme across family businesses, and represents a sort of crossroads for them. If a family business you remember from the past is not around today, it could be because it succumbed in the wake of one or more of these four Ds. In the case of TCM specialist Eu Yan Sang, the traumatic event was an external party buying the company.

As chief executive officer Richard Eu explains: “I got into Eu Yan Sang after someone took us over. We got bought out. That was the tipping point. It was a major disaster at the time, but it actually consolidated the shareholdings of the business into one hand, and subsequently we were able to do a management buyout. As with Atlas Sound, when things look bleakest, there is a silver lining.” Eu reveals that the fifth generation has joined the company — his son and a niece — but they have to learn the ropes before they can take on management positions.

There are many positive things that can be said about family businesses. They are agile, have the ability to make decisions quickly, there is a passion for the business, a strong culture and strong work ethic. These are traits which corporates don’t have, and they will help family businesses transition from one generation to the next. However, to ensure longer-term sustainability, it is clear that family businesses need to formalise structures and provide greater transparency. It’s also important to keep management as professional as possible.

Ng notes that a recent global survey of family businesses conducted by his company revealed that finding talent is a key issue for family businesses. “It’s not always easy to attract talent because the talent will know there is always a glass ceiling,” he says. Family businesses that survive after the third generation or more likely have no such glass ceiling for management from outside the family. They will tend to look more like corporations the longer lived they are. But even as they grow, they should not forget the basics centring on the family element that got them there.

Chong Huai Seng, an investor in listed companies, speaking from the floor, applauded the housekeeping practices displayed by the family businesses at Keep It Going. “If only many of the public listed companies had a percentage of the discipline displayed it would make for much cleaner management.”