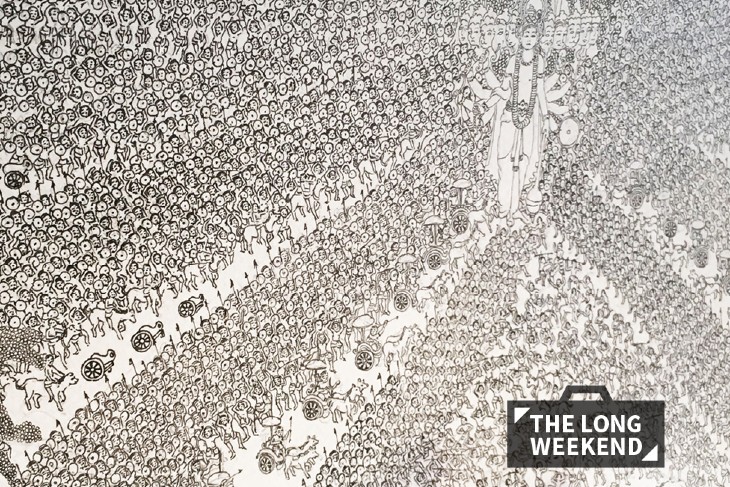 THE minute detail that is core to Keliki art requires Job-like concentration and attention to detail.

The art is filled with little images that are either in black and white or coloured in, representing life and religion in this region of Bali. While you would expect a more mature artist to be delivering the work, it’s often left in the hands of young artists who are gifted in presenting the old narratives in new unencumbered light.

I Wayan Gama started a school to teach the children Keliki art. Located in his home, the school teaches children the skill for free. Their works are then sold to tourists and well-wishers alike.

“I want the young to learn about Keliki art and to make sure the tradition stays alive,” says the youthful and enthusiastic teacher.

As he showcases the works of students as young as seven, to those of teachers who have seen much more, he talks about the discipline it instils.

The art has a similarity about them, regardless of the artist. Drawn from memory it does allow for some creativity, but invariably all the forms tend to have a predictability about them.

But that’s not to take away from the great degree of skill expressed by the students.

Many of his charges are not charged for the art schooling they receive. Their efforts also fund their training, as their works are sold.

“We give 90% of the sale proceeds to the artist and the rest is used to keep the school running,” Wayan explains.

The activities take place in one of those deep compounds fronting the road. As you climb the steep stairs, you can see youngsters earnestly hunched over their art, pencil and brush in hand.

Concentrating on their drawing, the youngsters are unfazed by visitors oohing as they squint at the amount of detail entailed.

Wayan smiles as he points out the various art pieces that are up on the walls. As he walks and talks, we go further into the compound, almost tripping over the chickens that scurry underfoot. The smell of woodfire is in the air as the stoves are alight with the evening’s meal.

Wayan started the school in 2005. He had studied under his uncle from the age of eight, before returning the favour to the next generation of students.

Keliki, with about 3,000 people has about four artist communities that continue the work. While the art establishment doesn’t take their work too seriously since it’s done on paper and not canvas, it has a reasonable following.

The young artists would serve as good ambassadors of the art. They always touch a soft spot, especially since they are valiantly keeping their tradition alive.