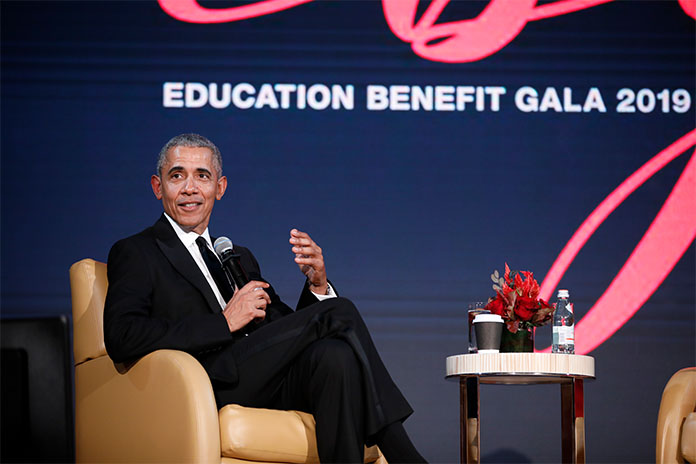 THE MANTLE of the President of the United States of America may have been passed on, but President Barack Obama’s advocacy of change remains a constant mantra in his life.

The 44th President of the United States is in the region for a series of engagements and spoke about his experiences to an audience of some 500 at the inaugural Education Benefit Gala 2019 on Saturday night.

As a champion for change, initially through his presidential campaign built around hope, change and optimism — remember the “Yes We Can” chant —  and now his Obama Foundation with its mission “to inspire, empower, and connect people to change their world”, President Obama’s messaging was clear through his talk.

“The biggest impediment to change is the resistance society has towards adopting new ideas,” he stated.

He believes the only way to solve climate change or conflicts is through education and by developing a new group of leaders, while providing them with networking and mentoring opportunities.

The next generation waiting in the wings, he observed, was “extraordinary idealistic, motivated and innovative”.

And they are “cynical about the existing situation”.

They want less hierarchy and apply entrepreneurial aspects to many programmes.

“The key is for old people to get out of the way, and give these young people a chance to update old institutions for new circumstances.

“Often people stay around too long,” he observed before the moderator switched subjects.

Here are some of the highlights of the hour-long discussion with President Obama.

President Obama: “if there’s anybody who denies the science of climate change come talk to me because the evidence…”

Sui Ling: “He’s not here. We didn’t invite him…” To much laughter in the Ritz Carlton ballroom. 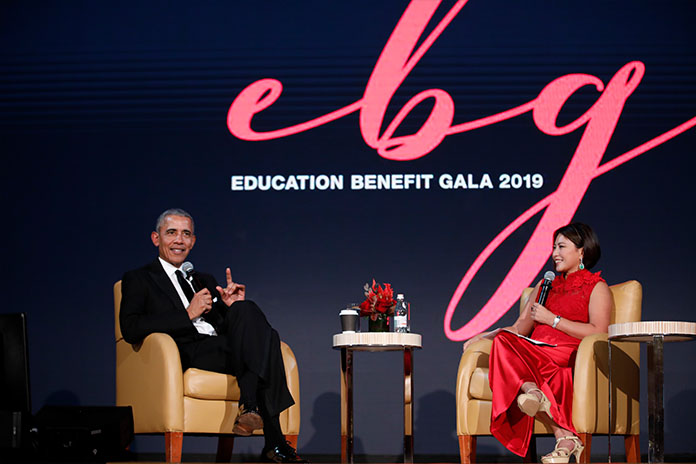 President Obama: “Climate change is one of the most significant national security risks that we face because everything, from increased hurricanes, displacement, droughts that lead to migration, all these things are likely to create conflict and trouble spots around the world.

“All countries have a part to play. We understood that this framework would be rickety at first. Even though the US has pulled out (of the Paris Climate Accord), I think that’s a temporary situation. There’s overwhelming consensus, whch will create pressure (to change the United States’ position).

“Early in on in my presidency, I made a massive investment and changed the incentives around clean energy so that the private sector and private capital followed the government investments and our tax laws, and that became baked into the marketplace. We have actually seen significant reductions, enough to actually meet US targets. We’ve raised fuel efficiency standards on US-made automobiles.

“When the new President came in, he said ‘I want to reverse that.’

“The interesting thing is, at that point, all the US automakers had made massive investments in retooling in order to meet these new standards. They are thinking on a 10-year or 20-year time horizon. So, you’re still seeing increases in fuel efficiency despite the federal government pulling back.

“The goal for all of us should be to recognise the urgency of the problem and to put pressure on politicians to deal with it. And that’s going to have to come from the bottom up.

“Singapore may be a rare exception in which the government, in a very technocratic way, recognises the problem, analyses it and takes steps that are necessary, but that’s partly because Singapore is a small country.

“It’s the big countries that are going to be the source of biggest pollution. The United States, China, India. Often, public opinion is going to drive change.

“The young people understand the urgency of climate change more than their parents or grandparents do. But they are the ones who will have to deal with the consequences. Us old people would have died off by the time we start seeing the most significant effects (of climate change). There’s a generational selfishness in how we are approaching this that we have to acknowledge.”

“If you think of the trend lines over the last 20 years, you had this huge burst of optimism resulting from the Berlin Wall coming down. Europe unifies. You see democratisation trends around the world. China is embarking on this remarkable set of economic reforms that is lifting more people out of poverty faster than in any time in history. The global supply chain forms. The Internet has this promise of stitching us all together. Even after 9/11 and the eruption of terrorism in the Middle East and around the world, I think people still felt as if many of the old conflicts were done.

“You had historians saying the old great conflicts are over. And then the financial crisis happenend.

“What it laid bare was the fact that that beneath this globalisation process there was great turmoil.

“Part of it had to do with the fact that there were winners and losers in globalisation. The winners were countries that had previously been on the periphery but now found, because of their labour force, because of changes in economic opportunity, that they were able to access and compete. This region (Southeast Asia), as a general rule, is a winner in that process.

“In many of the economically advanced countries, suddenly manufacturing is moving away. Unskilled labour finds it can no longer compete with lower wage economies elsewhere. You have communities that used to rely on a single factory being wiped out. You’ve got a whole bunch of economic insecurity.

“You also have cultural dislocations taking place. If you live in a small rural town, you are inundated with people with different cultures, ideas, attitudes. Everything seems uncertain.

“One thing that appears to be universal is that when people are fearful of the future and their economic prospects are suddenly not as promising, they turn back to fear and tribalism and a politics that is based on ‘us and them’ and somebody else is threatening us. And politicians can take advantage of that.

“And you have these extraordinarly powerful information technologies (social media and media) that move at warp speed and that nobody can really control.

“When you look at history, each time there’s been a major disruptive information technology, that has caused social disruptions as well. The printing press, radio or television, they can be used for good or for ill.

“You combine all that and you see this rise in nationalism and strong man politics and polarisation and sectarianism. Brexit was a reaction to it, as well as the US election.

“In terms of what we can do about it, history doesn’t move in a straight line. Sometimes there’s a step backwards or two, and you move forward again. The key is to make sure that people believe in logic reason, facts, tolerance, common humanity and rule of law and that their voices continue to be heard.

“And that we are not fearful. We continue to fortify those values on whatever stages we can. And we all have a role to play in that.”

The Role Of Media

“Today’s media is multi-sourced. In Jakarta when I was growing up, we had one TV station. Media was so restricted that voices outside of what was prescribed couldn’t be heard. Now you have a million voices, and you can’t put that genie back in the bottle.

“The goal has to be that social media platforms recognise that they are media. There’s an increasing recognition that they are making a series of editorial decisions in their algorithms and in terms of what rises to the top of the search page. That means they’ve got some social responsibilities.

“If you’re the media, you have a role to play in maintaining high standards of truthfulness and objectivity. If you are in politics you have an obligation to adhere to the principles that bring people together rather than turn them on each other. If you’re in business you have an obligation not just to seek profits but to be responsible corporate citizens and to give back.

“If we all do our part I’m confident that over time we’ll get through these difficult times.”

More after this message, when President Obama talks about Education and jobs. 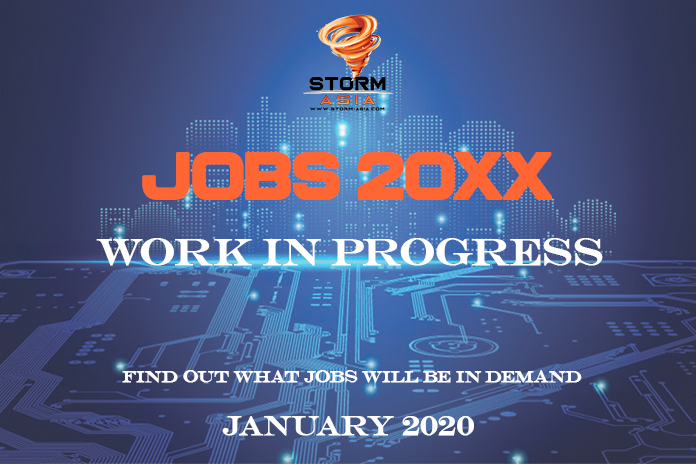 President Obama: “Societies will have to re-examine how work is distributed and how goods and services are distributed. There are not going to be enough jobs for everyone. Everybody is talking about driverless cars. It hasn’t happened yet, but it’s inevitable, and so if you think of the number of people who make their living just driving, you’re looking at potentially 5% of some populations. That means those governments have to start thinking about how much people should work and how long they should work.

“We are going to have to re-examine how we think about work.”

Sui Ling: In the tech industry out of all the capital raised in Silicon Valley, only 3% went to companies with women founders. How is that possible in this day and age?

“Obviously this affects all sectors and all societies. In the United States, part of what happens in Silicon Valley is a reflection of a deeper bias which begins very early on. Girls are discouraged in subtle ways from studying maths and science.

If you go into Silicon Valley you’ve got a lot of guys who are now tycoons who, you can tell, weren’t going on a lot of dates when they were young and who aren’t that comfortable around women. But now they’ve got a lot of money, so…

“How are we encouraging young women and organising classes such that they feel this is something accessible to them?

“The broader issue is that we all come out of societies that for millennia have discriminated against women and girls in powerful ways.

“We must determine from day one that young women have the capacity and talent and the right to do anything they want as our sons do. That has to be institutionalised.

“From a business perspective, this is not charity. Any society that is leaving women out Is leaving out half the pool of talent. You will be less successful.”

“I always used to insist on having a wide range of viewpoints in order for me to solve a problem. The problems we were dealing with, in saving the world economy or dealing with ISIS or addressing climate change, if they were easy to solve, somebody else would have solved them. The only problems that came to me were the ones that nobody else could solve. And we were always dealing with probabilities because there was never a perfect answer.

“In those circumstances, the best way to solve a problem is to have the best data available and the widest range of perspectives and solutions sitting around the table problem solving. Otherwise you’ll have blind spots and group think and you’ll fail to see all the possibilities and you’ll make worse decisions.”

The Education Benefit Gala 2019 was sponsored by Novena Global Lifecare and The Sylvan Group.

See also  Can The Bars And Restaurants Hold On?