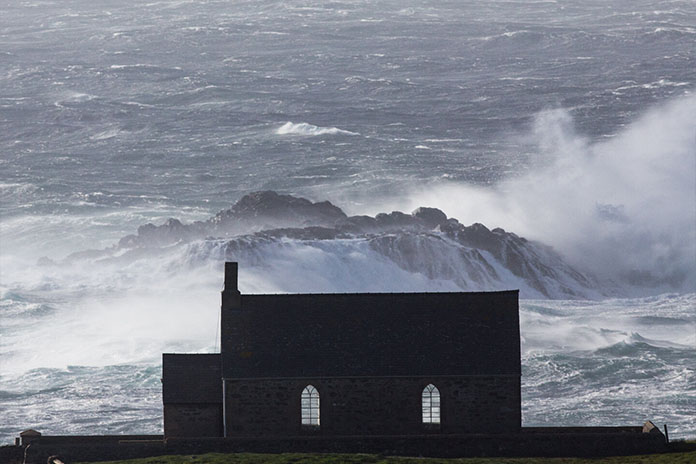 ONE OF the last remote spots in Europe, the Shetland Islands are pounded by the Atlantic Ocean and the North Sea.

The Shetlands form an archipelago of 115 islands that lie over 900km north of London, near to the Faeroes and Norway and from where you can catch a ferry directly to Iceland. The islands feel unexploited, hidden and almost forgotten, so much so that the moment you step onto them, the solitude is overwhelming.

Only 22,000 people live on these cold and cloudy islands and nowhere on them are you more than 5km from the coast. In fact, everything about these islands is moulded and lashed by the sea and almost nowhere can you escape the force of the wind.

Most people reach the Shetland Islands by plane or ferry from Scotland but all quickly feel they are in Scandinavia in the time of the Vikings. In fact, the Shetlands only became part of Scotland in the 15th century when the King of Norway and Denmark, Christian I, pawned them to Scotland to pay for his daughter Margaret’s dowry when she became engaged to James III of Scotland.

Even today, maps of Shetland reveal a treasure-trove of ancient Norse and Viking ruins and arcane Norse nomenclature that is impossible to pronounce or decipher such as the Hamars of Burraland, the Brigg of Waas, Grind o’ daNavir and MattaTaing, all of which are geographical landmarks. Here in Shetland you quickly sense a lack of connection to the rest of the world, a bleak yet beautiful isolation.

But it’s not just the solitude that brings me to this place. I recently read a book by Bella Bathurst about the ancestors of Robert Louis Stevenson who built, off the Scottish coastline, 97 lighthouses over some 200 years. Commencing in the late 1700s, it was an engineering dynasty at a time without power-tools, concrete and cranes, a time when the materials required to build towers in the ocean had not yet been invented.

Stevenson trained as an engineer with the intention of joining the family business but could not deny his writing. Even so, he said about his ancestors: “I might write books till 1900 and not serve humanity so well”.

The most extraordinary lighthouse built by the Stevensons was the MuckleFlugga, completed in 1857. Built to guide British naval ships on their way to the Crimea, it sits off the tip of Shetland’s most northerly point — a building of sheer determination on the edge of a vast emptiness. It’s a beacon that calls out to me.

To get to Shetland I take a 13-hour overnight ferry from Aberdeen in the north of Scotland. I alight at Lerwick, Shetland’s capital and only real town.

Lerwick is on the island known as Mainland and I’m surprised that a town of only 7,000 people can be so cosmopolitan and architecturally complex. Flat-rock landing places known as lodberries are renowned as are the grand homes that sprang up in the 1800s.

A short walk from the centre of Lerwick leads you to the imposing Fort Charlotte, built in 1665 to protect shipping in the second Dutch war, and ClickiminBroch, a ruined watch tower occupied from 700 BC to the 5th century AD. I hire a car and drive south of Lerwick past 5,000-year-old burial cairns, decaying Viking homes and the pristine isthmus or tomboloof shell sand that connects Mainland with St. Ninian’s Isle.

At Sumburg, on the southern tip of Mainland Island, I amble through the brittle ruins of an Iron Age village while a mile away, at Jarlshof, I look in awe at an archaeological site that contains layers of human settlement dating back 4,000 years through the Neolithic, Bronze and Iron Ages. Close by, I peer out over the headland as thousands of puffins flap about, and killer whales, dolphins and Atlantic Grey seals swim by.

Travelling north from Lerwick I drive my car onto a series of roll-on roll-off ferries which connects most of Shetland’s 15 inhabited islands and make getting about easy. The landscape north of Lerwick is rugged and wild. I soak in the scenery around which seems to leap straight from a postcard, and along Dales Voe which is simply breathtaking. Heading west, I decide the road to Eshaness must surely be from a fairy-tale as it passes by caves, basalt lava cliffs, standing stones and thousands of years of crumbling history. At the Bight of Haggrister the North Sea meets the Atlantic Ocean and signs warn of otters crossing.

Yell At No One

I catch a ferry from the top of Mainland Island and 20 minutes later drive onto the island of Yell. Yell is the least fertile island — 215sqkm of heather and moorland and you can’t help feeling this may be another planet. Once away from Shetland’s few settlements the islands feel absolutely empty, even deserted, with 100 islands being utterly abandoned. A day can pass without seeing a living soul. 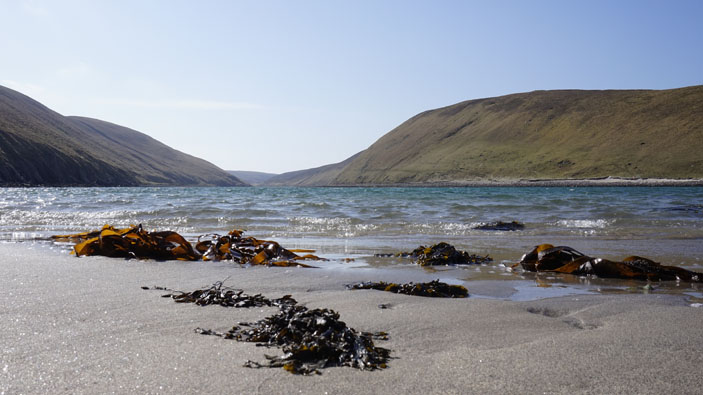 The souls of the dead, however, abound. At Hjaltadans, a ring of 38 standing stones from the Bronze Age circles two earthfast stones. Folklore suggests that a fiddler and his wife were surrounded by 38 trows (Shetland’s little people) who were turned to stone when caught by the rising sun. Another tale tells of the Finns, a race who lived in the time of the Norsemen, who could transform themselves into fish or birds. It is said that they possessed seal-like skin but those who lost this skin are forever trapped on Shetland.

This rich tapestry of myth and legend shrouds the isles and even today eccentricities flow like the Auld Rock Beer brewed on the islands. Inexplicably, the locals hang salted fish from clotheslines and furnish bus shelters with sofas, TVs, refreshments and even fish tanks so that they look like living rooms.

During winter a bizarre and spectacular fire festival known as the Up-Helly-A’ sees the burning of galley ships while the locals dress up in period costumes. One evening, while walking to catch a ferry, I am given a lift by a woman who tells me that I have a “purposeful stride”. As we drive onto the ferry the captain looks into her car and gives me a wink. I ask the woman if she knows the captain, only for her to reply that he is her husband. It is a peculiar place indeed, where a man can be completely at ease with the presence of strange men in his wife’s car.

Perhaps it is because Shetlanders are some of the friendliest people you’ll ever meet — a perfect blend of Celtic humour, Scottish romanticism and Scandinavian irreverence.

On Shetland’s most northerly isle of Unst, I spend one morning trying to dig my rented car out of polished stones on the beach at Westing, after becoming hopelessly bogged. After digging for hours, I begin to have visions of the car being swept away by the rising tide and ending up on Greenland, so I seek help at the nearest house. The man there regretfully announces that he doesn’t know how to drive but will go and fetch his neighbour who lives two kilometres up the road. After 10 minutes a giant man appears on a tractor. Without uttering a word he throws a rope around my tow-bar, attaches it to his tractor and drags us out. We spend the rest of the morning talking about this little corner of the world where he has lived all his life without once having left it.

I continue north and drive to Britain’s most northerly home at Skaw where the roof of the house is an old lifeboat torpedoed off the coast. A former resident, Walter Sutherland, was reputedly the last person to speak the archaic Scandinavian language of Norn. Close by in the village of Haroldswick, the post office has a unique frank stamp which proclaims your letters have been posted from Britain’s most northerly post office. I ask the clerk if there is a bank or teller machine nearby and she replies: “Ochai, we’ve a bunk. It arrives ev’ryTursdee at the hairdresser.” She says it unapologetically, obviously proud to live in a place where banking only happens once a week.

There’s a tremendous barrenness about Shetland. Its unusual geology was formed when rocks were forced to the surface from beneath the earth’s crust. Its position also creates an almost unique environment that supports such diversity of life — Arctic Sandwort, Shetland Mouse-ear and large, undulating expanses of peat known as blanket bog contain over 7,000 years of vegetation. Britain’s largest seabirds, the gannet, are seen in vast numbers, along with fulmars, terns and guillemots.

Shetland has half the world’s entire population of the aggressive pirates of the bird world, the Great Skuas, while the island of Noss has over 100,000 pairs of seabirds.

Hermaness Nature Reserve has 25,000 pairs of puffins and little Shetland ponies are everywhere. But just try finding a single tree on the outer islands — it’s well nigh impossible.

The island of Unst is shaped almost identically to the map of Treasure Island in Robert Louis Stevenson’s book and claims to be the last stronghold of Shetland’s giants. At its northern extremity is the MuckleFlugga Lighthouse and the time has come to find it. Getting there involves a long, hard walk to what feels like the end of the earth.

Sheer cliffs of 170m offer staggering vistas and gannets play in the air currents above me. Great Skuas dive-bomb me at will, wind lashes my face and yet I feel completely peaceful. After three hours I sit at the top of Britain admiring the lighthouse. How did they build it out there on that rock? It looks like madness. Even on this bright day the spot looks desperate. MuckleFlugga means big, steep-sided island, and waves often sweep over the 61m summit while below vicious currents rip about. I sit awed. There are many reasons to come to Shetland and I have found mine.

This article was first published in STORM in 2010.