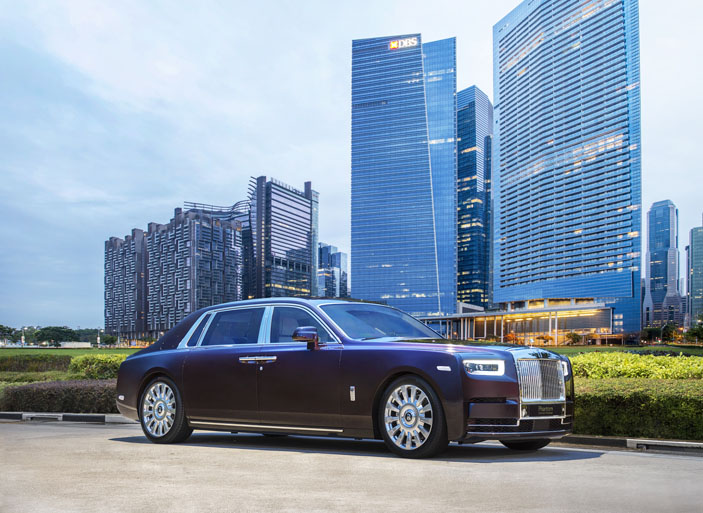 THE EIGHTH edition of the Rolls-Royce Phantom was unveiled in the metal at the Esplanade Theatre.

Through sliding doors into a dark interior with a wall lined with black-and-white images of previous models of the Phantom, prerequisite purple prose was served up as prelude to the launch of the latest model, in Belladonna Purple.

Outwardly, it will always be an impressive and sizeable chunk of metal that has been designed to wow with its presence. The huge grille is still thumbing its nose at the conventions of car design, but then, that’s the whole raison d’etre of the brand.

With an eye-watering price tag of $1,778,888 and an additional $300K for the extended wheelbase — cracking the $2 million mark — this new model is priced close to the outgoing model. But it has a lot of new stuff onboard.

That’s only to be expected as the previous model was released in 2003. Since it’s been a while, that would probably explain the dozen orders locked in even before the car hits the road here — expected around the first half of 2018.

With next year’s order book taken care off, one could well ask about the parallel universe occupied by Rolls-Royce owners who look quizzically at current economic numbers. Well, you could ask, but in true RR tradition, mum’s the word.

Back to the car then, and the new Phantom sports a new 6.75-litre, twin-turbocharged V12 engine that quietly despatches 900Nm of torque at a low 1,700 rpm. While it was naturally aspirated previously, the new engine is also tasked with running quietly, and redefining the “magic carpet ride” that Rolls-Royce is famed for.

These days, being the quietest ride means doing battle with the electric cars that ghost along at speed. But few of these electrified four-wheelers can compare with the opulence on offer in the Phantom.

The entire roof is filled with more than 1,400 little bulbs that leave you in the company of stars. The shiny surfaces of the car pick up on that, so, you’re enjoying your magic carpet ride in the Milky Way.

Especially since satellite technology is showing the way forward and alerting the car’s suspension of imperfections ahead. And given Singapore’s patched up road conditions, the system will be working overtime.

The Gallery allows customisation to a high degree of exclusivity.

The dashboard, often a blank canvas waiting to be filled, now gets the chance to be given fresh form. A piece of hardened glass spans its length and the customer is able to display something that is representative of themselves or a work of art or tools of their trade, whatever (within reason) in that space.

As always, as is the case with a Rolls-Royce, it’s about reaching for the stars when it comes to accommodating their customers. It’s wonderful what creativity a deep pocket can bring forth in the desire to deliver.