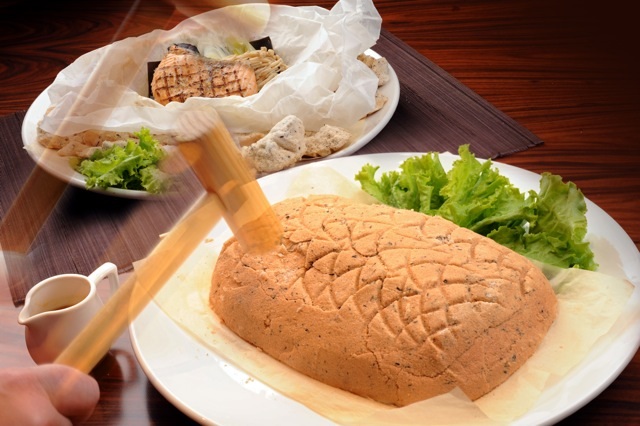 Salmon has a delicate flesh texture. When enveloped in a salt crust and baked, the meat is gently steamed while being infused with green tea. The result? Healthily cooked and a perfectly moist piece of seafood protein. 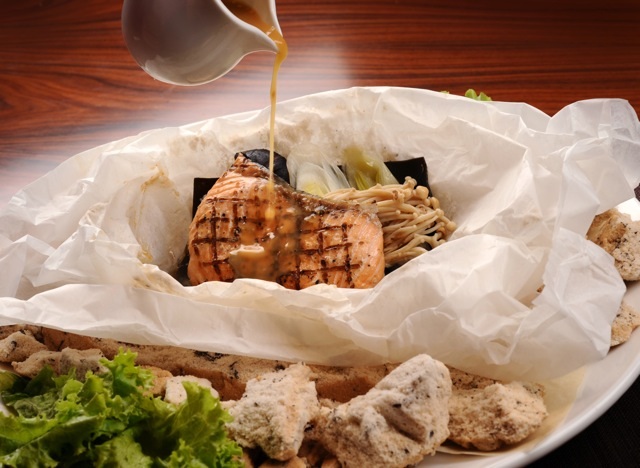 1. Rub salmon fillet on both sides with a pinch of salt. Set it aside for 10 minutes.

2. Heat up a grill pan over medium heat. Sear salmon for 2 minutes on each side. Remove from pan and set it aside.

4. In a small mixing bowl, lightly whip egg whites with a whisk. Combine 1 kg salt with Hojicha in a medium mixing bowl. Mix quickly until the mixture turns moist. Proceed to step 5 immediately.

5. Assemble the parcel immediately or the salt will dry up.

6. Spread half the salt mixture in an enamel or cast iron pan.  Lay a piece of silicone paper on it.  Place kelp in the centre of the paper, followed by salmon and vegetables. Wrap into a parcel.  Cover it with remaining salt, spreading it out evenly.

7. Put saucepan with fish into the oven. Bake for 25 minutes.

9. Enjoy salmon as it is or with chilli sauce.

TIP: Hojicha can be replaced with dried herbs or oolong tea. Instead of salmon, other local fish, prawns, lobster, pork or even chicken are also ideal. Complement with vegetables of your choice.  *Remove the salmon skin if desired.

You might also want to try these Whip It UP! recipes:

Coffee Butter — Whip It UP!

Kale Mixed Salad — Whip It UP!