IN A city of contrasting fortunes, the modern highrise towers of Mumbai look down upon hutments that stretch for miles around.

Mumbai’s surge in fortunes as the financial capital of India has seen an influx of people into the city. While some have benefitted from this swelling of interest in the city, it has also created large areas of slum dwellings as the city’s population swelled.

The plight of these slum dwellers have been well documented in books and films, the more notable ones being Danny Boyle’s Oscar-winning Slumdog Millionaire, Suketu Mehta’s Maximum City and Gregory David Roberts‘ epic Shantaram.

While these images of squalor are well publicised, it has occurred on the back of a rising economic tide.

Mumbai, often referred to by its previous name, Bombay, is the capital of Maharashtra and the fourth most populous city in the world.

Dharavi is the largest slum in Mumbai, housing one million people in 535 acres of land. It is the second largest slum in the world, but within is a thriving eco-system of 5,000 businesses and three times that number of single-room factories, according to World Population Review.

There’s a flourishing property market that has grown on the back of Mumbai’s slum rehabilitation scheme. The scheme was introduced in 1996 and led to sudden interest in redeveloping the slums. 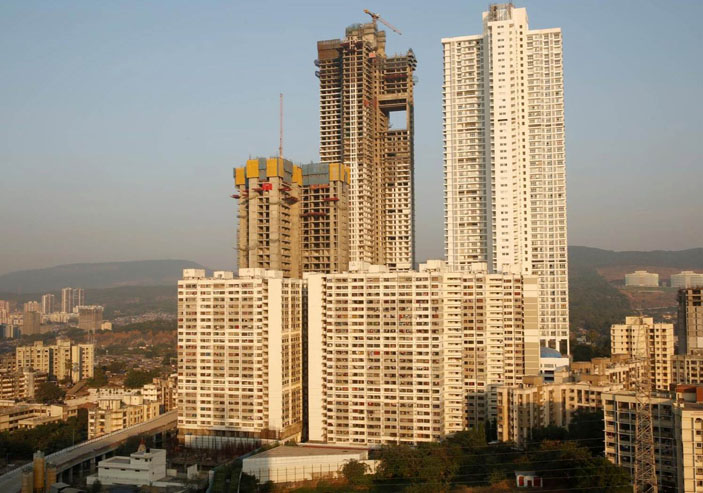 According to the Slum Rehabilitation Authority, any developer who gets 70% of the slum residents to agree to redeveloping an area would be granted the right to do so, on condition the slum families were rehoused in new buildings free of charge. To make it economically viable, the developer can use part of the plot to build luxury towers for sale.

This is in line with Maharashtra state’s desire to make its capital slum free by 2022.

With that in mind, Mumbai’s property developers have been diving into the slums to seize the opportunity. Some of Mumbai’s ultra-luxe properties have risen from such plot.

While a profit motive is obvious, some good has  come out of this ongoing exercise.

“About 35% of the cost of development goes towards relocating the slum dwellers,” explains Rahul Maroo, Senior VP of Omkar Realtors.

Omkar has been in the game since 2003 and has built its reputation on developing luxury gated communities, with international appeal.

Indian real estate is on the rebound from three tsunamis — demonetisation, the slump in real estate activity and the goods and services tax (GST).

While things are on the move again, it’s come as a result of the base prices in Mumbai declining 5% and effectively benefitting buyers by as much as 12%, according to Knight Frank’s chief economist, Samantak Das.

Risks And Returns Of Nation Building

Goldbell — Ringing In The Future

The shrinking property sizes would probably play a role in the interest in city living. The need for shorter commute times in congested areas means that smaller units are welcomed as a trade off.

Omkar has already delivered 15 projects in Mumbai and is in the midst of developing a further six projects.

As a market leader in slum redevelopment, it has relocated 60,000 slum dwellers, and plans on rehousing a further 12,000 in the next couple of years. Its track record has been noticed by other countries coping with slum issues.

While it has the experience and expertise to effect change in countries like South Africa, Cambodia and Nigeria, Rahul remains pragmatic. He says that Omkar wouldn’t look beyond Bombay unless it’s big enough.

“Some 40% of Mumbai’s population live in slums, so there is immense appetite and opportunity for us for many years,” he explains.

See also  Cashing In On The Cashless Society