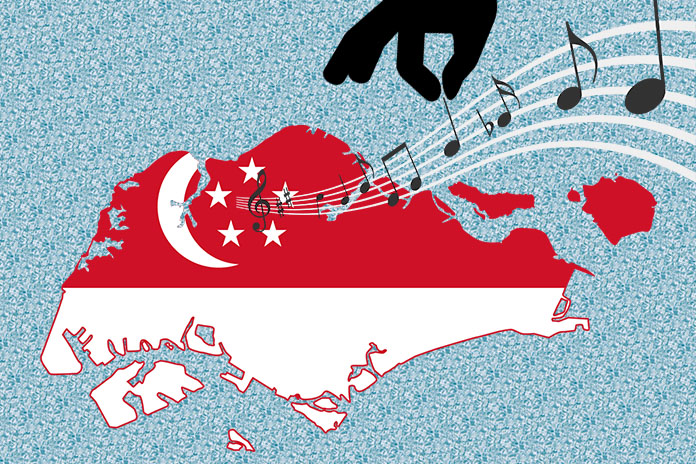 UNLESS you’ve been living deep under a rock where there’s no Wi-Fi, it’s probably a good idea to check if your idea is really YOUR idea before announcing it to the world.

That’s a lesson Indian “composer” Joey Mendoza has found himself suddenly schooled in. And he’s had to face the music.

You could well argue inspiration comes in many forms.

You could have caught a hint of it from a passing conversation, or from eavesdropping on the train home, or heard snatches of a piece of music that has refused to leave your head. Then just let your brain play little tricks on you over time, worming its way from your subconscious into your conscious, and eventually leaping out, ready to dazzle.

That works if the original information is a catalyst for a new direction of creativity. That’s apparently not the case with Joey’s “composition” We Can Achieve, which came to be as a result of a few word changes to  Count On Me Singapore.

Mendoza claims to have written independently, but when pressed for proof by the Canadian composer of Count On Me Singapore, Hugh Harrison, and the beneficiaries of the music and lyrics — the Singapore government — he backed down, “unconditionally and irrevocably” withdrawing any claims to the song.

The Ministry of Culture, Community and Youth (MCCY) felt strongly about the repurposing of the 1986 composition for Singapore’s National Day celebration, claiming it was “a direct affront to our ownership of Count On Me, Singapore”.

When you want to copy something, consider the source of the original information.

Singapore is a small, well-connected island. Stealing from this well is not like pinching a pail of water from a remote village.

This is a population that doesn’t sleep and loves to sniff around other people’s business to look for inconsistencies to wail and rail about on social media. These are some pretty fierce keyboard wolves out there, methodically hacking and banging away on their keyboards in anonymity and contributing to the pack.

So, if you are going to pinch something from Singapore, expect heavy resistance.

You can count on being caught out.

Eventually Mendoza backed down from all his claims, and the MCCY has accepted it and considers the matter “closed”.

Adrian Tan, intellectual property lawyer at TSMP Law Corporation, said: “Any pirates who give us a song and dance about misappropriating our national treasures must be prepared to face the music.”

Mendoza should consider himself lucky he wasn’t dragged through court, although, as Tan points out, “the international humiliation and having to confess to plagiarism” would be quite damaging to his reputation.

Considering Singapore’s adamant stand about the ownership of the song, I wonder why the government has opted for this light approach. Is it because it’s just music and doesn’t involve money and physical property? Or is it showing a benevolent side to foreigners, thus avoiding a cross-border skirmish in trying times?

But if all you’ll get from trying to nick something from Singapore is a light dusting of the knuckles without winding up in the nick, should we be expecting more attempts on other fronts?

Have a topic of interest? Know someone who would make a good panellist? We’d like to hear more. Please email editor@storm-asia.com with your details and a short summary.

See also  A Race To The Unexpexcted End