WHEN pushed to a corner, the motor industry has shown remarkable resilience to rebound with fresh ideas and innovative ideas.

With the demand for more urban mobility and reduced emissions, the car companies responded with cleaner and smaller engines. Turbocharging technology and the development of new materials and safety and connectivity features have come together to raise the value proposition.

Skoda pops out around 1.2 million cars annually. Founded in what is now the Czech Republic in 1895, it is part of the Volkswagen Group and has benefitted from shared resources. It is the largest company of the Czech Republic, with its cars getting wide acceptance in Europe, China and other parts of Asia.

The brand is pushing its electric vehicle initiative but is also in step with the other brands in the Volkswagen Group in delivering cars that may have passe names like Superb and Octavia, but it’s performance that matters.

The one-litre Octavia is a good example of a good convergence of technology and practicality.

The four-door sedan delivers a smooth drive and ride, and has reasonable acceleration and fuel consumption figures. Running on 16″ wheels, it delivers a composed if not distinctive ride, with comfort being key to the process.

It’s not the most refined of cabins, with contrasting textures — glossy centre console against a dull plastic dashboard, for instance — and a gear shifter which boasts DSG rather than the brand, but where it is needed, things work well. The connectedness is up to date with Apple CarPlay allowing easy access to your mobile phone. A touchscreen adds more functionality, with some of the features offered on the multi-function steering.

There are paddle shifters on the steering wheel, though shifting on the Octavia doesn’t yield any significant changes to the car’s behaviour. Best to let the engine do the needful in conjunction with your right foot.

The three-cylinder engine is able to get you from standstill to 100kmh in 10 seconds and is smooth about it. In normal driving, it is smooth and seamless but gets a bit choppier in sport mode.

As a daily run around, the Octavia is a fine option to pick. With its cavernous boot, you could throw in a large family’s shopping or your golf bags, and with its C1 VES banding and fuel consumption of 5L/100km goes easier on your pocket. 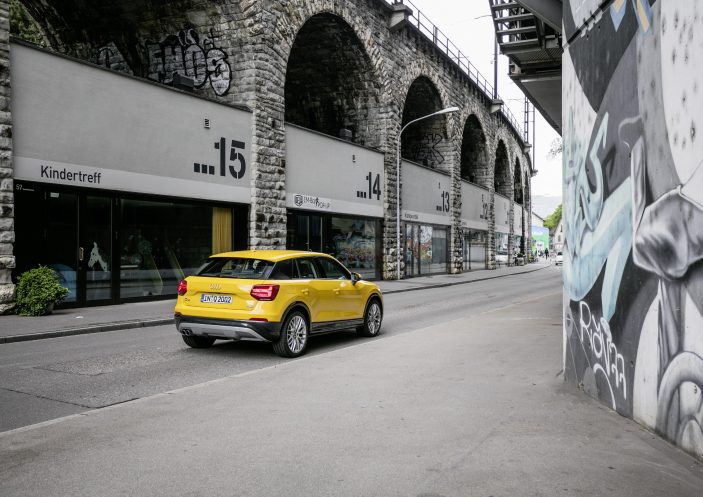 Too Close For Comfort

The initial 1.4L Sport and 1L versions of the Q2 offered turbocharged three- and four-cylinder engines, respectively that lets this small SUV deliver a nippy ride.

Looking larger than it is thanks to some heavy sculpting, the small run-around is tight in the back, not entirely generous in the boot, but is comfortable in the front.

The new 1.4L version comes with a non-sport package that shaves some features off the first batch.

While the 1L offers 87kW, and the 1.4L delivers 110kW, on the road, the two aren’t too far apart. In some instances, the 1L offers a punchier kick off in sport mode compared to the larger capacity option. With almost $15,000 in price difference, you might be better off going with the 1L version.

The features on offer are of an expected standard, but certainly not at the leading edge. You can opt for the Audi virtual cockpit and other embellishments, but you could also  check yourself before committing to it.

The Causes Of A Slipped Disc

The 5 Stages To A New Malaysia The Korean cars seem to have the edge over their counterparts across the Korea Strait. The Korean peninsula’s output seems to be more imaginative and the engines sound less laboured and more refined than those from Japan.

Hyundai’s Kona offers a small SUV that mixes some sharp looks with a design sense that offer a cheerful demeanour.

Available in 1.6L and 1L formats, unlike the Q2, there’s a significant difference between the two Korean variants.

The 1.6T-GDi engine is turbocharged and has a seven-speed dual-clutch transmission. The 1L engine is a three-cylinder, 12-valve, six-speed manual. For those who like to get their left foot into the game, this is a good opportunity to maintain your clutch and accelerator balance. Shifting is smooth, without any evident stiffness, though there is a soft whining at around the 70-80kmh range.

That aside, the 1L Kona displays the drive and none of the breathlessness you might expect from a small capacity engine. Mind you, it’s no speedster, doing the century sprint in a leisurely 12 seconds.

But it carries three in the back with some cosiness and there’s space in the boot for all the needful. What it has in the cockpit is as good as you’ll see in many higher-end models.

The connections with all the modern gadgets are smart and the sound system has a fairly good punch. Safety features like lane keeping assist and blind spot alerts seem almost luxurious for a base model.

But that’s just the sign of the times, and how the bar keeps getting pushed higher.

Hyundai, which manufactures its own steel for it cars, has also developed a lightweight body frame that uses high-strength steel for passive safety. Structural adhesives reduce the weight while adding torsional rigidity, which in turn helps in fuel consumption.

A top-tier option for its price point.

*Check with the dealer for the current price.