FROM cancer to boxing via death’s doorstep, Kumar Perumal has always been a trading blows to remain in the fight.

“It’s a gamble,” says Kumar Perumal, proprietor and Head Coach of boxing gym King of Strength with a sheepish grin, as he explains why he decided to strike out on his own.

Not new to gambling the odds, Perumal was diagnosed with a rare form of age of 13. That was the first knock down. But he bounced back, and after almost nine months of extensive chemotherapy and radiotherapy to keep the cancer at bay, he remained standing. His body was ravaged by the beating it took at the hands of the chemicals, and while the cancer was in remission, the side effects of the treatment stayed with him as a painful reminder of his ordeal. “I was so weak, I couldn’t even walk 1km, much less train to be a boxer.” His interest in martial arts led him to boxing, which required a note from his doctor to clear him to participate in the sport. While he could only train at a very slow pace, under the watchful eye of his coach (and sometimes also his mother), Perumal was fighting fit within a year.

He says that the tough gym environment also led him to rebuild his mental fortitude, while helping him regain physical strength. A lesson, he says, has not left him since and prepared him for the obstacles he would face in life.

“Imagine you are in the ring, and you are getting hit. You don’t have the choice to take off your gloves and walk away, you have to fight your way out to survive.”

The Philosophy Of The Fight

Having gained so much from the sport, Perumal says that he had always planned to give back to it in the later stages of his life. His plans, however, were accelerated by yet another setback when he was declared unfit for national service. Following the completion of his Sports and Exercise Diploma at Republic Polytechnic, Perumal had intended to join the Singapore Police Force as a regular, but he was turned away on grounds of his previous medical condition. “Once again I felt like my entire plan for life was gone.”

After working as a personal trainer at a number of gyms, Perumal started his own “gym” with his final month’s paycheck. Even then it wasn’t smooth sailing. With a threadbare set of equipment, all of which he stored in his, he began his travelling gym, training at outdoor parks and amphitheatres. It took him eight months before he had the confidence and the financial backing to make the switch to a permanent location at the A’Posh Bizhub in Yishun. He says that they are still growing month to month as much of the proceeds from membership fees are plowed back to improving the facilities and equipment at the gym.

Perumal had set himself a two-year time limit to try this new venture. He says that come July, it will be time to take stock and see how he has fared, to decide whether the gamble was a success, and to see whether to keep going or to throw in the towel.

“I’m still within my two years, I’ve got nothing to lose,” he declares. Only time will tell if he is victorious at the bell, but it’s clear he isn’t giving up without a fight. 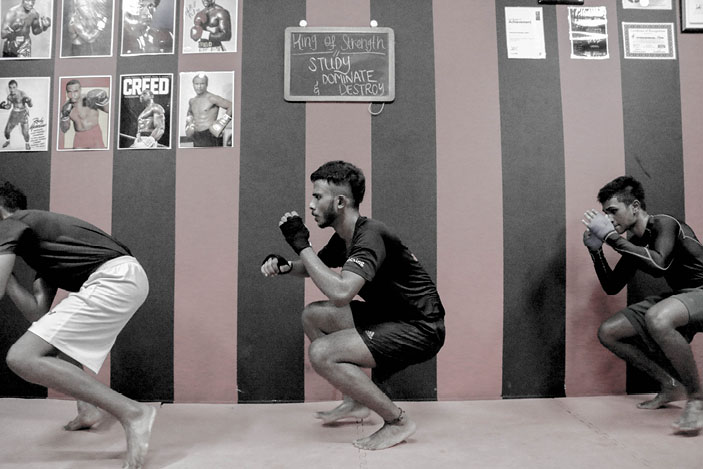 See also  Fighting For A Cause