It is crowded in the air, and as more people take to the air, the industry is fighting for a bigger slice of the pie.

The airline industry has seen its ups and downs through the course of history, but the recent decades have brought new players and challenges into the mix. And not all of these trends are necessarily in the consumers’ interest.

“Competition is not new in this industry and we have always faced competition on every route that we serve,” says Nicholas Ionides, Vice President of Public Affairs at SIA. “In recent years, structural changes have also been upon us, including the proliferation of low-cost carriers and the expansion of other full-service airlines.”

Low Cost Carriers (LCCs), also known as budget airlines, are elbowing in, taking over 25% of the worldwide market according to industry analyst Canadean, The Global Low Cost Airline Market to 2019. In exchange for incredible savings on airfare, LCCs streamline operations through a no-frills, minimalistic approach to air travel.

LCCs aren’t the only threat to the traditional airline. The growth of Persian Gulf carriers — Emirates, Qatar and Etihad — has also hurt the established players. Gulf carriers provide full in-flight service and are known for their luxurious inflight amenities and top notch service. In addition, the Gulf carriers are strategically located within eight hours’ flight of four billion people. They also own the world’s youngest fleets, holding one-third of the orders for Boeing 777 and Airbus A380 planes.

To decrease operating costs in light of the dropping airfare prices, legacy airlines have conducted a multitude of operational changes like cutting out non-profitable networks and squeezing in additional seats (arguably at the expense of comfort) within lower-yielding fare classes. 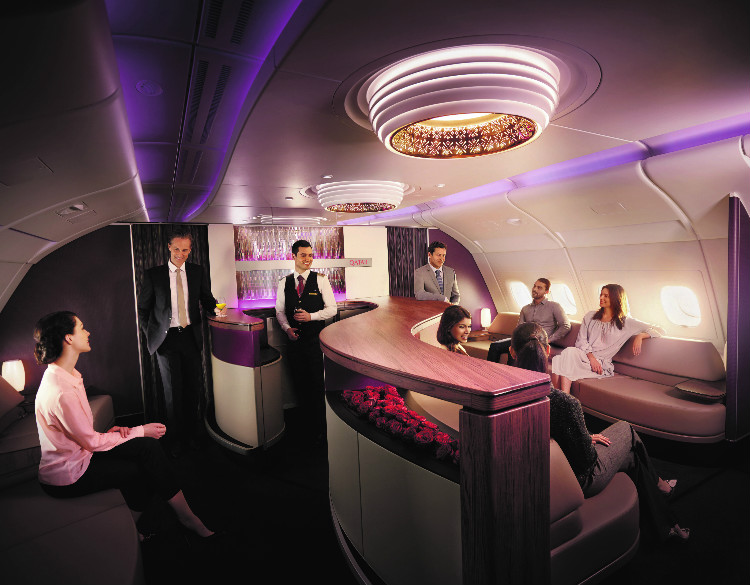 In line with this approach, legacy airlines are changing the mix of fare classes in their cabins. “Economy class prices have gone down over the years,” says Sobie, “as they aren’t as profitable anymore. Legacy airlines are giving away lower yielding economy passengers to other competitors. I think this is intentional, because other carriers like the gulf carriers have such low economy costs. Instead, airlines want to maximise profits from the business class segment because it’s more profitable.”

Premium economy has been introduced on airlines like SIA and American Air to counter the Gulf carriers’ influence and draw in business passengers, says Sobie. Though still a niche market, the reason for its increasing prevalence coincides with a current trend amongst business travellers to fly via a more economical, but still comfortable cabin. In addition, corporates from small-medium enterprises and start-ups prefer premium economy for its lower cost.

That said, competition for the business traveller has intensified. “On the open market, airlines are very aggressive with web and promotional fares,” says Sobie. “On the corporate side, airlines form contracts offering very low business class fares to certain companies, particularly those with a lot of travel volume, to rival their opponents.”

“Business travel has always been very important to SIA,” says Ionides. The SIA group has focused on improving its business class service, increasing the number of flight routes they operate and maintaining the level of comfort and innovation in its product. Benefits that favour business class passengers have been implemented as well, with PPS club and Kris Flyer offering special privileges to passengers who fly in upper tier classes like Business and First Class.

With all this upheaval, will there be a mass closure of once-profitable airlines? Sobie doesn’t think so. “Look at SIA. It’s still profitable, just that it may not make as much money as before. SIA is adjusting its strategy to focus on different areas like Tiger Airways and Scoot.

In 2006, the International Air Transport Association (IATA) released a report on the rapidly and steadily increasing market share of LCCs across four different continents. And reports on the growth and profitability of Gulf carriers have been around since 2010.

“The industry recognises these changes and they’ve adjusted to that. Will this affect their profitability and their business? Yes, but they have to respond just like any other industry,” Sobie explains.

There might be changes in store for the consumers as well, and not all of them good. The economy passenger may be slowly pressured out of legacy carriers, and lower-yielding classes may face increasing discrimination. “But the fact is that fares have steadily gone down over the years and there are more choices too,” counters Sobie. “There are cheaper and better one-stop and non-stop options, cutback economy products and really premium business products.

“The consumer just needs to be knowledgeable about what product is being offered by the airline, and which options best suit her.”

The sky’s the limit for travellers.

The Spirit Of Adventure In Dharamshala