Commerce has long pulsed through Singapore, and forms the foundation of our psyche, as two exhibitions at the National Library showcase. By S. Sakthivel

Imported ice from America was what Whampoa’s Ice House offered. Back in 1854, this service was listed in The Straits Times Almanack, Calendar, and Directory. There weren’t many businesses listed, but soon there was one less as the ice business melted away.

This nugget from history is part of the interactive displays at the National Library. From The Stacks, runs until 25 September 2016 and showcases the cultural, natural and socio-political landscape of Singapore’s history.

Exhibition curator Chung Sang Hong explains that early Singapore of the 1800s had already developed complex and sophisticated modes of business and commerce, as seen in the Almanack and Commercial Register, not much different to what we see today.

Communication was key to the growth of commerce, as different languages came together. Ever resourceful, the Chinese community put together a Hokkien/Teochew-Malay dictionary Hua yi tong yu (1887), which was written entirely in Chinese and had to be read in the Hokkien dialect to be understood. 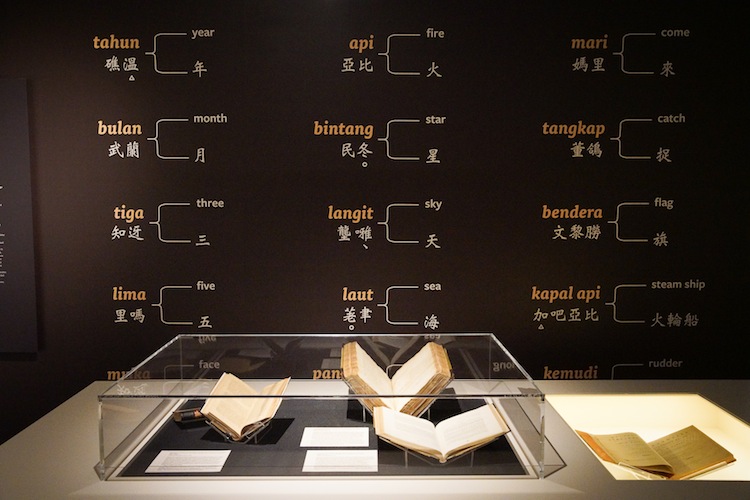 These and many other books and artefacts on show at the National Library’s From the Stacks exhibition, offer a rich slice of history from the library’s vast collection of 11,000 rare and historical items. For those with a keen interest in Sir Stamford Raffles, the library’s Rare Gallery offers guided tours once a month. On show are 38 items from the John Bastin collection. Dr. John Bastin is considered the leading authority on Sir Stamford Raffles.

Included in the exhibition are handwritten letters from Raffles to his cousin, one expressing his distaste for William Farquhar, and another about his desire to start an institution of higher learning. Many of those who were in seats of power were academics and were prodigious in their output. Several books are on display, including prized tomes by Raffles — and his wife, Sophia Hull, as well as books on diverse topics like medicine and entomology are also on display together with maps, photographs, and propaganda leaflets.