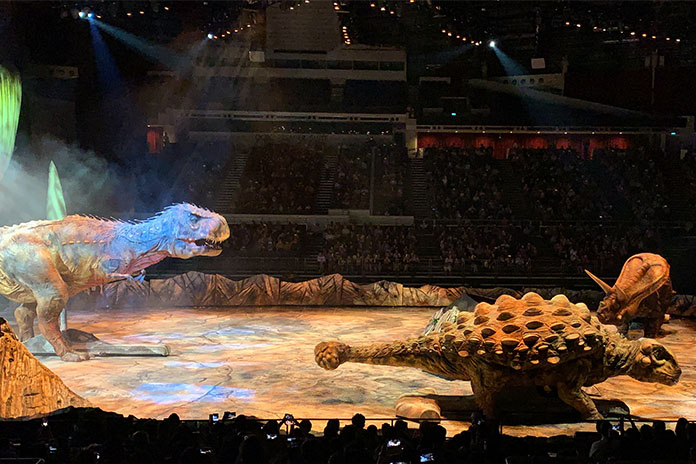 A BAD day for life on Earth has been made into a good day for entertainment.

Dinosaurs and most of life on Earth were wiped out when an asteroid is presumed to have hit earth some 66 million years ago. The impact on the coast of Mexico’s Yucatan Peninsula super-heated everything and blocked the sun for generations, changing the climatic conditions.

The BBC documentary Walking With Dinosaurs goes with this Alvarez hypothesis that the asteroid hit would have unleashed nearly a billion times the energy of the atomic bombs dropped on Hiroshima and Nagasaki.

Astronomers keep track of what’s out there today, ensuring there are no close calls that could damage the planet. Mind you, though, mankind is doing a good job of choking the planet…something the dinosaurs didn’t do.

How Did The Dinosaurs Die?

The other school of thought regarding the extinction of dinosaurs is linked to the volcanic eruptions in India which spewed lava around the same time, give a take a few million years. The Deccan Traps covers nearly 500,000sqkm of ground, and points towards the planet going through upheavels that could have unleashed ash and gases to alter the global climate.

While the demise of the dinosaurs harks back millions of years, fascination about them has always remained strong after mammals became the dominant species on Earth. Today, children and adults are drawn to these long-gone beasts and will gobble up almost anything about it.

Stephen Spielberg’s Jurassic Park would have stirred the excitement for reptiles and added new folks to the world of deinophobia. And the BBC documentary, which was seen in 200 countries by over 700 million people inspired the big show that travels in 28 40-foot containers.

Walking With Dinosaurs — The Live Experience may lack what Jurassic Park offered by way of a fabricated dramatic storyline and special effects, but what it does have is size and a sense of perspective that you don’t quite get on a screen.

The $20 million production features 18 dinosaurs representing 9 species. The 9 large dinosaurs — from allosaurus and brachiosaurus, to torosaurus and T-Rex — are operated by three-man teams who manoeuvre these 2-ton beasts so that they behave as the creatures would have. Two VooDoo puppeteers control the motion and emotion of the dinosaurs while the driver navigates the narrow circuit.

Sometimes it felt like you were watching a jam at the Flintstones’ drive-in, as the dinosaurs negotiated a narrow cul-de-sac; the behemoths to-ing and fro-ing as they try to work their way out of a tight spot.

The smaller dinosaurs are operated by a man in the suit, which must be pretty hard work given the ground that needs to be covered in that get up.

While the dinosaurs are the stars of the show, Walking With Dinosaurs at the Indoor Stadium is not just about these giant attractions. It’s a quick flit through millions of years, understanding why plant life and vegetation developed on Earth and their role in developing insect life (the dung beetle has prevailed), about volcanic activity and the history of the planet.

The series stays up to date with fresh discoveries made about dinosaurs, which are updated for subsequent tours. Walking With Dinosaurs — The Live Experience has already been seen by 9 million people in more than 250 cities.

The proceedings are kept moving at a steady pace, with a constant stream of activity set to  lively narration. But you’ve got to feel many of the children already know a lot about these prehistoric creatures (though it’s probably good for the adults to get a quick lesson). And the children’s reaction to the big beasts — waving and taking photos and videos —  makes you wonder if dinosaurs did walk the Earth, the audience would make for easy pickings.

Dinosaurs walk in the Indoor Stadium till September 8. Tickets priced from $78 to $148 are available at Sportshubtix.