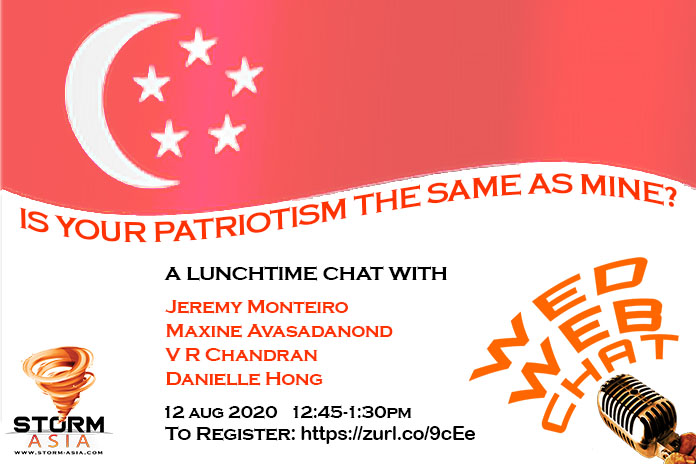 AT this time of the year, the patriotic fervour seems to go up a notch.

Flags will fly and Singaporeans display a strong sense of belonging. This year, it’s quite different since we’ve been trapped at home for most of the first half, and the nation — like much of the world — has taken a knocking at the hands of COVID-19.

National Day saw a pared down version of the parade with neighbourhood fireworks, which delivered on the intent without incurring a huge budget. And many activities went virtual.

Big or small, that sense of belonging still held true. But what does patriotism mean to you?

Tomorrow’s WED WEB CHAT brings together 4 panellists from different areas and eras who will share their thoughts in our lunchtime discussion.

Jeremy Monteiro has put Singapore on the Jazz map. The pianist, composer, producer vocalist and educator has been a professional musician since 1976, and has performed with several international names in music in great venues all over the world.

He composed One People One Nation One Singapore. He recently released his book Late-Night Thoughts of a Jazz Musician.

He holds two visiting professorial appointments and is Executive Director of the Jazz Association (Singapore) and Managing Director of his company, Showtime Productions.

He received Singapore’s highest honour in the arts, The Cultural Medallion, in 2002.

Danielle Hong is an Associate at Quantum Consumer Solutions. She is a culture researcher in a consumer research agency. In her previous lives, she worked with the National Volunteer and Philanthropy Centre and researched on cultural activism at the Institute of Southeast Asian Studies.

Maxine Avasadanond is a first-year law student at University College of London.

Prior to studying law, she was a Raffles Girls’ Secondary School student, where she was a member of the Red Cross. She participated in the 2015 SEA Games opening ceremony.

She speaks four languages and engages in chess, tennis, golf, tae kwon do and horse riding.

Following his stint in the army, Chandran V R entered the real estate industry. Since 1998, he has been striking deals and winning industry awards in Singapore and in the US.

Hear their views on patriotism and join in the discussion.

You can watch previous WED WEB CHAT discussions on www.storm-asia.com.

See also  It's Not Business As Usual