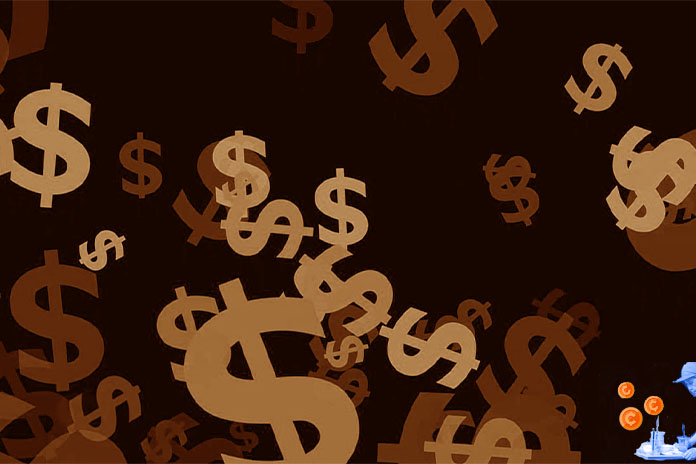 TO understand whether a government policy is indeed beneficial, we must weigh its pros and cons, and these must be further supported by data and not based on ‘I think…’ or IMOs (in my opinion…).

The more academic papers I read and the more I research this topic, the more I am inclined to support the government to introduce a policy for having a minimum wage.

A lot of analysis has been published by the Institute of Labour Economics (IZA). The proponents of minimum wage believe that the wages of the lowest income groups should be raised to allow them sufficient income to meet the basic costs of living.

Countries that implement minimum wage policies also aim to prevent the lowest paid workers from exploitation. In Singapore’s context, that refers to the old (silver generation) uncles and aunties cleaning your tables at hawker centres, the cleaners sweeping and clearing rubbish in your estate, the landscaping workers beautifying your condominium grounds, security workers guarding real estate assets, and even students doing part-time work serving in a retail shop or flipping burgers.

The main counter argument against having a minimum wage policy is that companies which rely on many low-wage workers will see their costs rise. Cost increases will then be passed on to consumers resulting in the overall costs of living potentially increasing for everyone.

The primary fallacy with this counter argument is that it assumes the implementation of minimum wage would significantly raise the total business costs for companies AND that these companies will be able to pass the increased costs to consumers.

One of the more widely quoted meta-studies (study of studies) on the price effects of increasing minimum wages was done by IZA’s Dr Sara Lemos in 2004.

In the paper The Effect Of The Minimum Wage On Prices, Lemos aggregated the data from previous studies on the possible effects on price increases due to increases in minimum wage.

However, we must be mindful of several points in which these studies were set:

This article examines the potential cost impact of minimum wage from a corporate cost perspective. This approach will be different from those taken by macro economists and labour economists who might tackle the issue from a national perspective.

A few companies were selected that might be affected by the implementation of a minimum wage. Then, estimates were applied to the data to determine  how much these companies’ annual staff costs might increase if Singapore introduced a minimum wage law.

The staff costs are then viewed against the total annual expenses of the companies in order to consider if the impact might be large enough that these increased costs could be passed on to consumers, and, if so, what might the cost increases be. 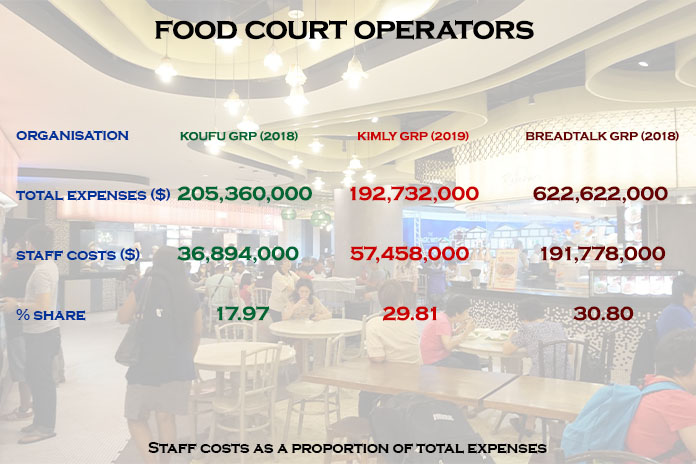 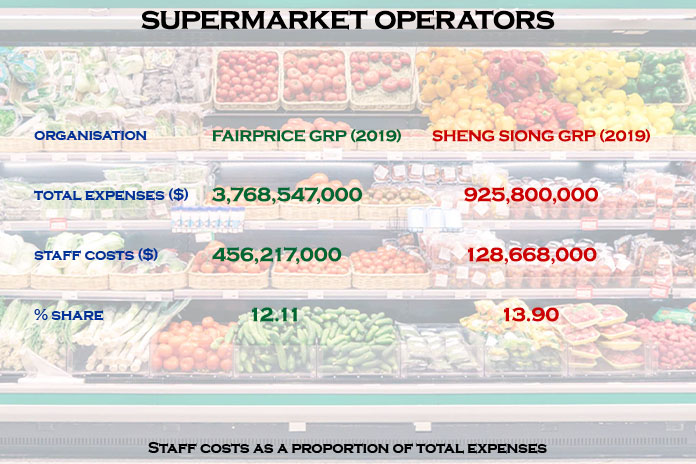 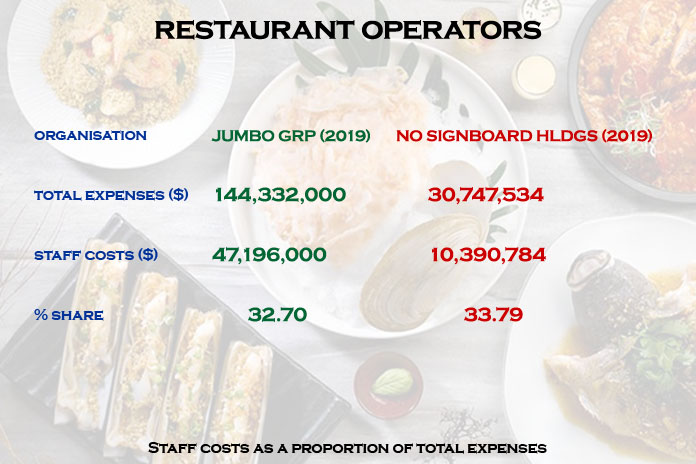 Restaurant operators Jumbo Group and No Signboard Holdings have staffing costs that made up 33% and 34%, respectively, of total expenses. 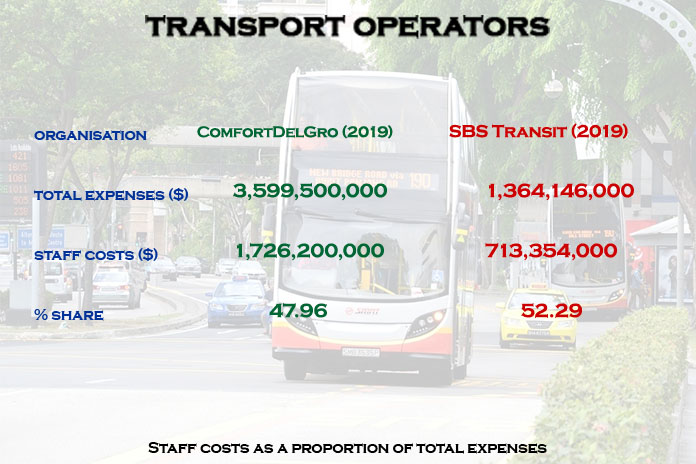 Finally, and surprising for capital-intensive transport operators ComfortDelGro and SBS Transit, their annual reports show staffing costs that made up 48% and 52%, respectively, of total expenses.

Data available from these 9 large companies that touch Singaporeans’ daily lives show that staff costs do form a material fraction of their overall costs.

However, we must ask ourselves how many or what proportion of their employees are paid below the minimum wage such that they will be affected by the implementation of a minimum wage law.

Generally, the workers likely to be under the minimum wage would likely be currently performing cleaning, logistics, packing, security and sanitary services.

Minimum wage simulations were tested with food court and supermarket models, where I assumed 10-30% of workers wages are lifted by minimum wage.

In each of the following scenarios, we assume that a minimum wage of $1,400 per month (including employer CPF contributions) is implemented. This is based on the assumption that the minimum hourly wage rate is $7 per hour and that the average low wage worker clocks 50 hours a week and there are 4 weeks in a month.

Let us assume that these workers are currently earning $1,000 a month (with CPF). How much more would the addition of $400 per month per low wage worker cost these companies? 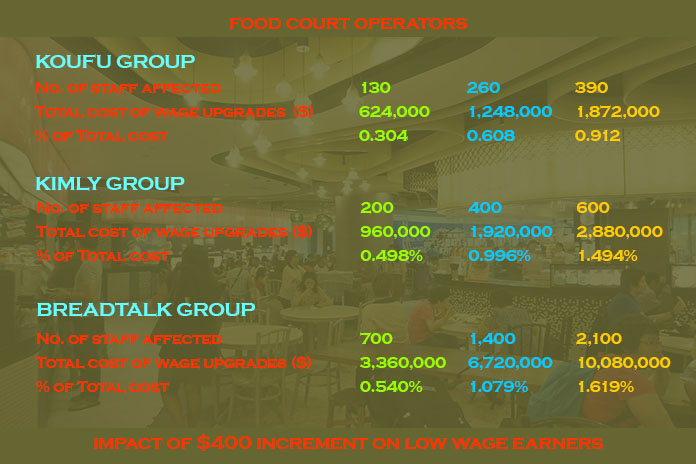 The scenarios show that for food court operators, Koufu, Kimly and Breadtalk, the implementation of a $1,400 per month minimum wage law might increase total business costs between 0.47% to 1.62%. This means that IF, against market competition and other fluctuating costs for ingredients, rentals, utilities, etc, these food court operators could, and are able to, pass their staff cost increases on to consumers, the price of a bowl of mee siam might increase from $4.00 to $4.07. 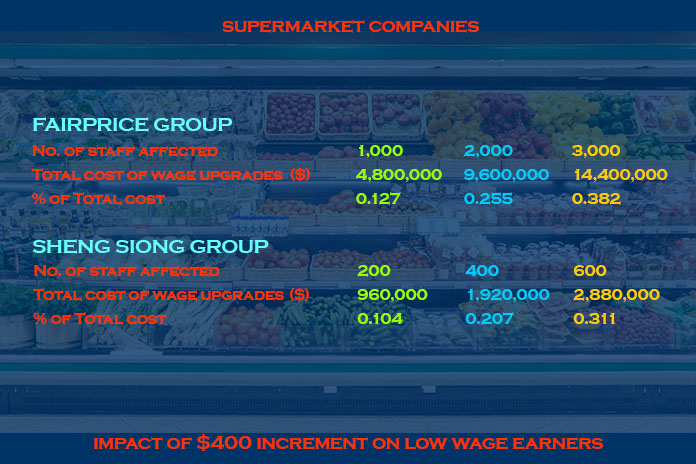 For supermarkets Fairprice and Sheng Siong, the cost increase ranged between 0.10% and 0.38%. 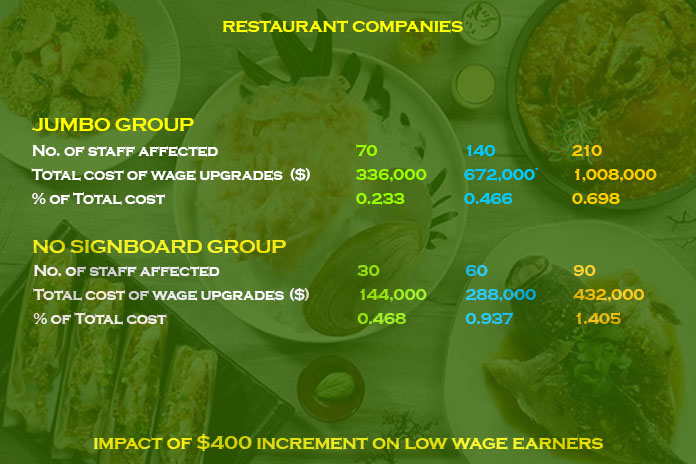 The group of restaurant operators, Jumbo Group and No Signboard could see costs increase by about 0.26% at a minimum to 1.40% at the maximum. If they wanted to pass the full cost increase to consumers, a family dinner for four at the seafood restaurant could increase from $150 to a maximum of $151.50. 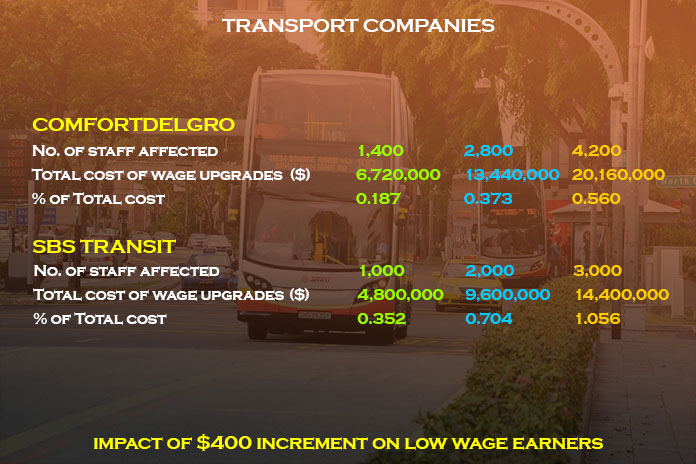 Finally, for the transport operators ComfortDelGro and SBS Transit, the increase ranged between 0.13% at the minimum to 1.06% at the maximum.

The Cost To The Consumer

So, if we added up these cost increases, a day out by a Singaporean going for a meal at Kimly’s food court and shopping at Fairprice supermarket might cost the Singaporean between 50 cents to $1 more for the $50 he spent. The impact of a 2% increase in Goods & Services Tax might cost him the same extra charges.

We must bear in mind that for most companies operating in a competitive market, it is very difficult to pass on all the cost increases to consumers as they need to consider affordability, consumers’ price expectations and whether they are pricing themselves out of the market. A hawker doing well selling $4.00 per plate of chicken rice may lose a lot of business to the $3.80 wantan noodle stall once he increases his price by 5% to $4.20.

It is highly unlikely that there are companies in Singapore who have 30% of their workforce as low wage workers earning below $1,400 per month (including CPF contributions). It is more likely that that number floats somewhere below 20%, and if that is true, the upper end of cost increases based on this list of companies is up to 5.9% in totality. It is unlikely all of this  increase will be passed on to consumers, especially in a price sensitive market.

Thus, a reasonable cost increase to consumers might be between 0.1% – 1.0% (closer to the lower end). Put another way, I believe that close to 100% of companies may hold prices steady if minimum wage laws were introduced.

Other Effects Of Minimum Wage

Professor Linda Lim of the University of Michigan highlighted in a recent interview, The Economic Case For A Minimum Wage: A Conversation With Linda Lim,  that even if the implementation of the minimum wage led to a cost increase for consumers, it might be partly offset by the decreased need for the taxpayer to subsidise the living cost of lower income groups through welfare programmes and subsidies through grants and social services, since the lowest income earners would now be earning closer to the living wage.

The debate on the implementation of a minimum wage spans many fields. Financial feasibility does not equate fully to economic feasibility. Other ongoing conversations on this topic include measuring the policy’s effects on work productivity, the possible effects on unemployment and the sociological impacts. This issue is way larger and touches more aspects of the society than the very focused view presented in this article.

Small Price For A Greater Good

It is a small increase that is more than justified if it improves the security of livelihoods and social outcomes for the struggling silver generation. After all, an increase from a 2% GST hike, a 30% increase in water prices and possible post-COVID-19 increases would all weigh far more heavily on our cost of living.

As a young Singaporean, I understand that the discussion will continue above and beyond that which this piece has covered. I hope that this has aided in the national conversation on securing the livelihoods of low wage workers. However, more than that, I hope that the national-level discussions from a wider range of stakeholders will result in raising the quality of life for our lowest paid workers.

I also hope that the analysis above serves as a reminder not to look at statistics at face value. The calculations above show that staff costs can be a material part of overall expenses. However, when we dig deeper we can see that a policy like minimum wage which is expected to have little overall impact on companies in Singapore, will therefore have a rather negligible overall effect on costs.

As a friendly reminder, it is important to look beyond the possible financial impacts that this policy has on companies and consumers. For example, one of the more meaningful conversations on minimum wage looks at its effects on employment and the overall job market. I hope that as these conversations grow louder amidst the gig economy and post-COVID-19 world, more researchers will discuss the possible impact of minimum wage on employment in Singapore’s context.

Joel Kam is a recent investment and financial risk management graduate from the Cass Business School, City University of London.