The woodblock print meister is a diminutive man who operates out of the “the world’s smallest museum of ukiyo-e” in the Higashiyama ward of Kyoto. Here, amongst the protected world of heritage sites and urban redevelopment restrictions, Ichimura continues the longstanding art of creating art using the tripartite relationship between drawer, carver and printer.

His delicate contribution as a printer can be seen on the floors of his small facility where he creates and sells a selection of his work.

The welcoming Ichimura is all smiles as he explains how the process of printing requires concentration, skill and time to create delicate designs or bold decorations that were once steeped in tradition.

Dating back to the early 15th century, ukiyo-e is seen to have emerged during two distinct periods of urbanisation. The Edo period of calm and growth helped establish the art form, while the later Meiji period from the late 17th century, saw the opening up of Japan to Western influences.

Many of the printed images told stories of the time. They catalogued life in the cities; the activities and scenes that many could relate to. Although it lost its position of influence in Japan, ukiyo-e enjoyed some resurgence overseas at the hands of Van Gogh, Whistler, Monet and Toulouse-Lautrec, among several others, as part of the Japonisme movement. 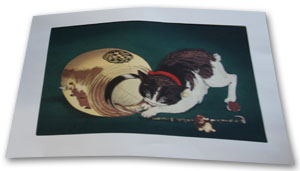 Today, there are fewer than 100 people who can complete the process of ukiyo-e, reckons Ichimura, though he isn’t too perturbed about this. He is happy to fall to his knees at his workspace and ink some blocks and turn plain pieces of paper into colourful explosions of vivid landscapes or delicate geishas. Whatever sells, in keeping with the original intention of ukiyo-e — to appeal to the needs of the mass market.

Ichimura’s quaint studio is close to the entertainment district of Gion, filled with narrow streets housing restaurants and geisha residences. It’s an ageing residential district also speckled with shrines. Within its cramped quarters, Ichimura is welcoming, encouraging visitors to enter and dabble in his chosen craft.

His hope is that the spirit of the woodblock will prevail for a long time.

This article was first published in STORM in 2011.