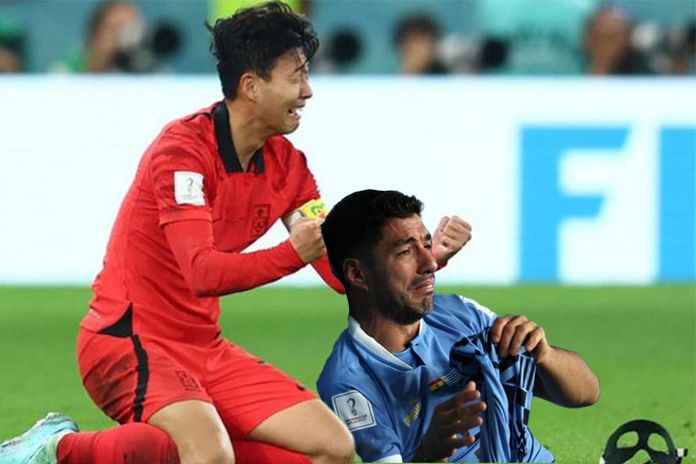 But that’s okay. South Korea’s Son Heung-min in delight,  Uruguay’s Luis Suarez in despair. Emotions so thick, you can sink your teeth into it.

In an outstanding group stage of the FIFA World Cup Qatar 2022, the tournament certainly lived up to its motto: “Expect Amazing”.

Given the number of unexpected results, the superlatives about this World Cup are going to flow thick and fast, just like emotional tears of joy and despair.

Many of the favourites were dealt unexpected sucker punches.

South Korea kicked a last-gasp winner against Portugal in a 2-1 win to secure its place in the knock-out phase.

Cameroon, already out of contention, became the first African team to beat Brazil at the World Cup.

Japan came back from behind twice to beat Spain and Germany.

Saudi Arabia, the second-lowest ranked in the tournament at #51, messed up Lionel Messi’s #3-ranked Argentina 2-1.

With so many unexpected results, in none of the 8 groups did the top team secure maximum points.

After the shock results of the 48 games played at the group stages, the next 16 will probably settle into a more predictable pattern as qualifying teams come to terms with the weather, realise that losing at this stage means immediate exit, and can prepare accordingly, having seen their opponents in play.

But hopefully the upsets will continue.

Germany Off The Mark

Meanwhile, it’s a winter of despair for once-fancied and highly-ranked Germany (ranked #11), out for the second World Cup running, Belgium (#2), Uruguay (#14) and Denmark (#10), among other also-rans.

England Striker turned football pundit, Gary Lineker, was once famously quoted: “Football is a simple game; 22 men chase a ball for 90 minutes and at the end, the Germans win.”

Lineker will have to rethink that description of the game given the remarkable misfortunes of Germany of late.

But the global standard of the game has risen with so many players and coaches finding positions in well-established football leagues around the world, that the divide is narrowing.

That makes it much more exciting, as unexpected results result in unexpected behaviour — like goalscorers still insisting on taking off their jerseys in celebration, and getting a yellow card for their efforts courtesy of a prudish FIFA ruling from 2004. That could prove costly in the coming rounds as two yellow cards trigger an automatic suspension, and the yellow card slate is only wiped clean after the conclusion of the quarterfinals.

Off the pitch, there must be excitement brewing on the commercial front as brands associated with the tournament enjoy some of the rub-off effects of a tournament that will remain on the minds of football fans for many years to come.