AS YOU scan the menu at Pintxo Bar, you scratch your head trying to figure out what “Txuleta”, “Mejillon” and “Txangurro” mean, and how these words are pronounced.

So you grab a drink and hope that loosens the tongue, as you prepare to wage a war of tongues with the menu.

Fortunately, you don’t have to go through the tongue- and mind-twisting routine as the pintxos are laid out on the counter and you pop them in your mouth; no foul or fowl, since most of the offerings are seafood, pork and beef.

Many mistake pintxos for tapas, and would be doing so at great personal peril if they were in Spain. While tapas are served — sometimes complimentary, depending on the city — as bar grub in Madrid, Seville and other parts of Andalusia, in the Basque country it’s called pintxos. 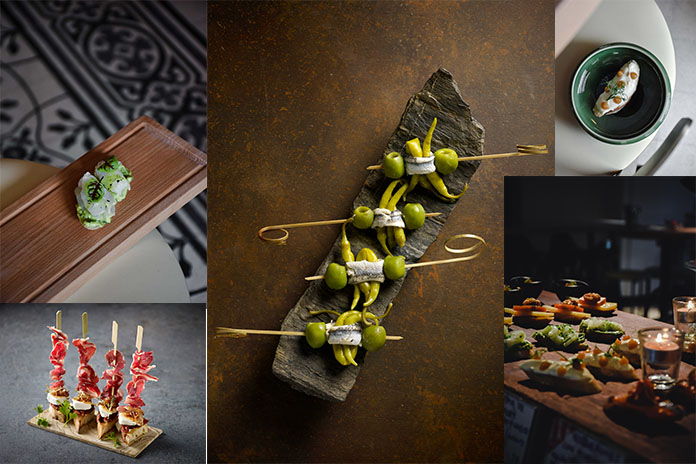 Derived from the word which means “to pierce”, pintxos are often served with a cocktail stick pinning down a savoury treat onto a slice of bread. But that’s not necessarily nailingit, since expectations have changed over the years as new cuisines and ideas have swept through the land.

Taking that concept to a higher plane, the folks at The Alkaff Mansion, up the slope of Telok Blangah Hill Park, have set up TXA Pintxo Bar and UNA with the intention of showcasing Spanish fare. The heritage building has gone through several incarnations, once being the headquarters of the World Buddhist Society before becoming a rijsttafel and party joint, then an Italian restaurant. 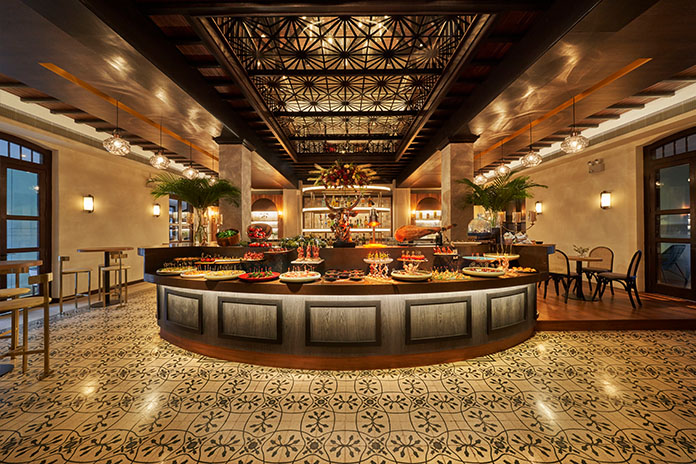 Alkaff Mansion’s journey through the karmic cycle now settles on the Basque palate and Wildseed Cafe, a pet-friendly joint.

TXA Pintxo Bar presents a ceaseless flow of small bites served up by chefs Marta Elvira Segalés and Silvana Pascual Romero. The graduates of the Basque Culinary Centre are here as part of the 1-Group’s focus on this particular Spanish cuisine.

A delectable selection of bites is effortlessly put together and delivered with drinks to wash everything down. 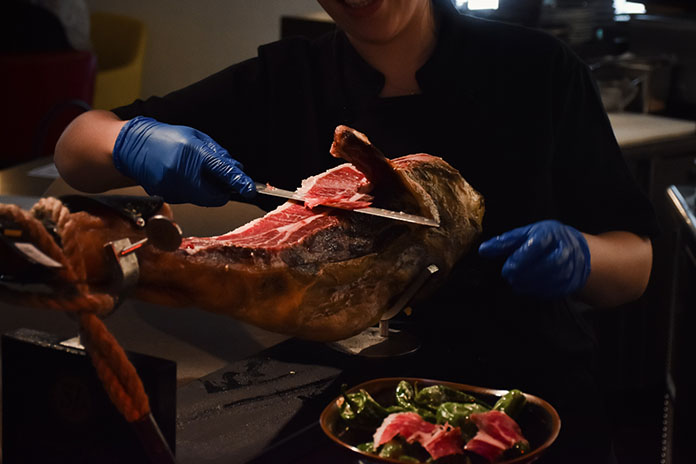 Ingredients are paramount, as evidenced by the variety of steps involved in bringing even the smallest of items to the table. The Crudiente de Jamon is a savoury Iberico cracker with smoked cod roe sauce that unleashes a host of flavours. The Pintxo Igeldo has tuna sourced from the Basque country, accompanied by boiled tomato and preserved peppers. 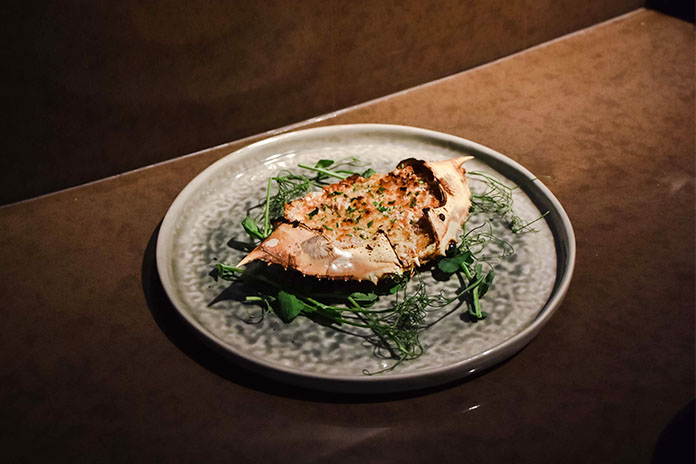 These inhalable pieces are no match for the more substantive Txangurro a la Donostiarra. The flower crab is boiled then shelled. As the shell chills in an ice bath, the crabmeat is added to a sofrito base (leek, onion, tomato cooked for 40 miinutes then topped with brandy). Flour and seafood stock are added and the mixture popped back into the crab shell. The makeover is done after it is grilled with bread crumbs and butter. Lots of steps but the end result is divine for its blend of flavours. The grilled octopus — Pulpo a la Parrilla con Pure de Nabo — is accompanied by a turnip cream and three drops of picada oil (made from oven-roasted almonds and hazlenuts, saffron and nora pepper and a few other ingredients). 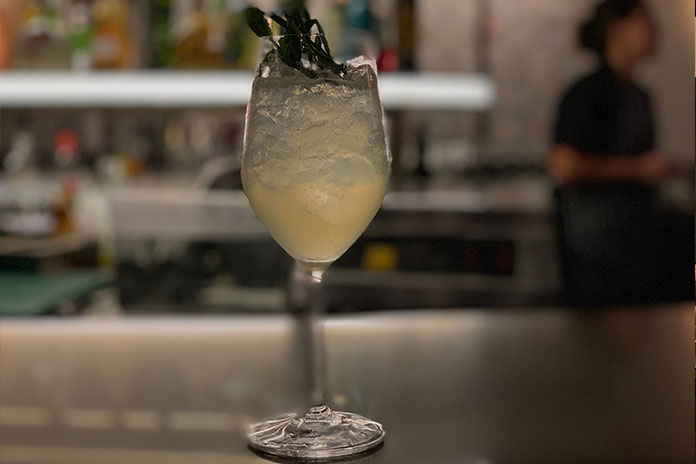 The mixologist is ever ready to ply you with a range of drinks — from bloody to virgin concoctions. The Mansion — brandy, raspberry puree, grand marnier, cherry liqueur and Angostura bitters — is refreshing as it works well with the bites. The Rebujito, with its mix of white wine, lemon juice, Sprite with spearmints and rosemary, is good enough to quaff as a starter, or anytime after. 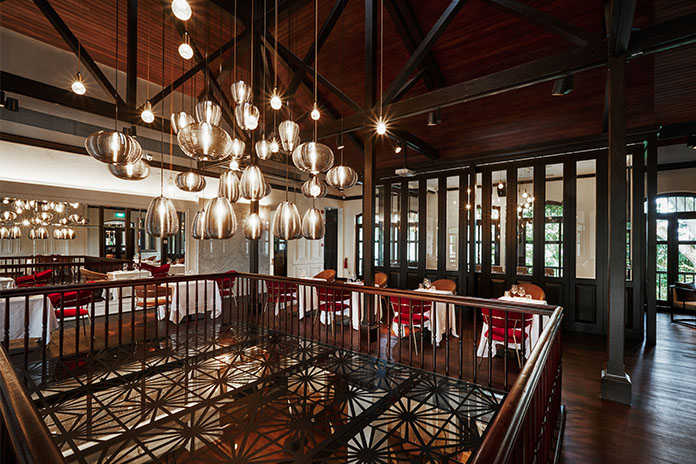 Step Up To UNA

Up the stairs and the mood shifts from the brightly-lit open bar to a sedate setting with dark woods, chandeliers and linen-draped tables. The ambience is more romantic, but it’ll be a tussle for attention between your date and the Basque fare.

Squid ink noodles paella with spicy calamari and the Spanish chorizo paella bring different tastes to the fore. The deep fried calamari is a crunchy contrast to the noodles in the former, while the strong chorizo dominates flavours of the latter. 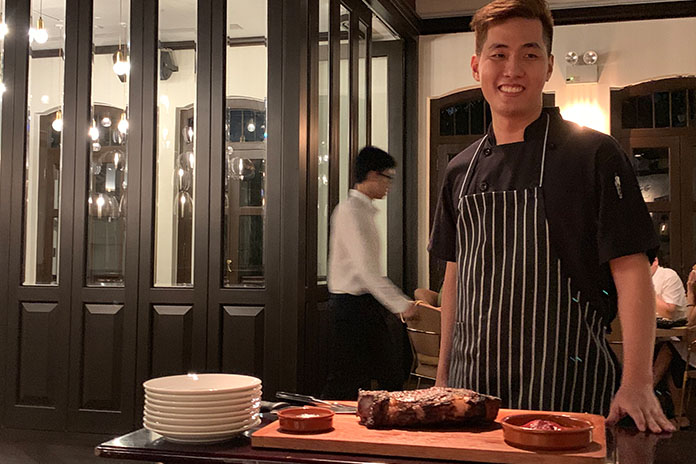 But you’re really there for the Grilled prime rib beef served with piquillo emulsion. Weighing in at $180, this Basque-inspired dish is prepared simply but the flavours of the mature bovine from the region — between 5 and 8 years — brings forth a rich melange of flavours. Piquillo peppers are cooked with olive oil, garlic and confit for close to an hour for the emulsion. 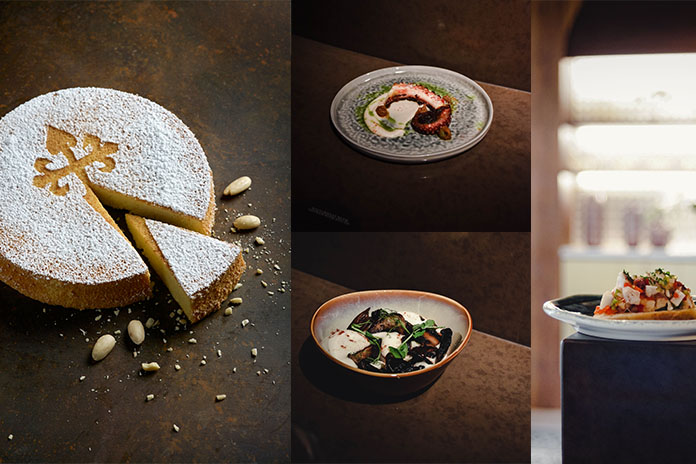 Winding up the meal with desserts would be expected, and again the range of flavours at the end is part of the Spanish tradition. Chocolates and olives, or rice pudding? Or would the cheesecake, Tarta de Queso La Viña be more to your preference?

When in Spain, opt for the churros! Served here with a spicy pecan chocolate sauce, it’s an ideal end to a filling meal.

You may want to roll down the hill and head home for a siesta after that.

See also  Pesce In Guazzetto — Whip It UP!