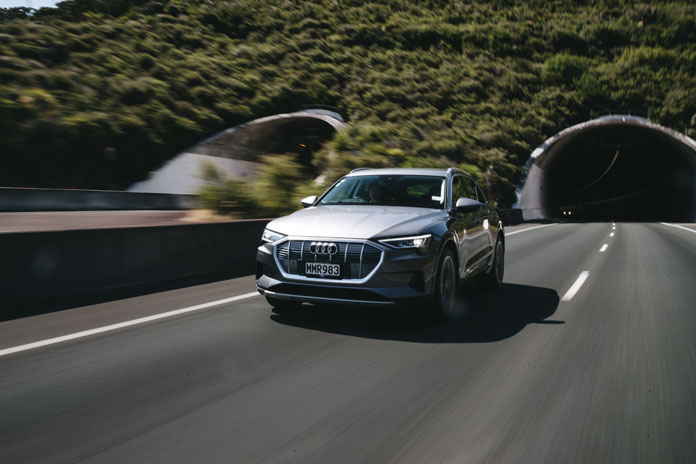 NO sheep were startled…or worried…as the Audi e-tron whizzed by them, silently going about its business, as the sheep did likewise to the grass.

New Zealand as the season changes from spring to summer can be a bit erratic. Generally fine days can, on occasion, become wet and miserable. But ’neath azure spring skies with cotton candy clouds, the e-tron, fully charged, charged fully forth along Auckland’s city roads and on into verdant countryside. 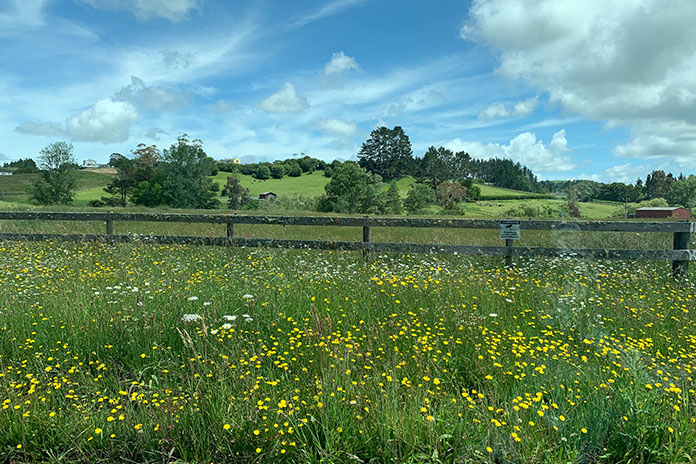 The e-tron marks Audi’s entry into the electric age with a set of wheels that suggests lupine tendencies beneath that ovine XL-sized fleece. 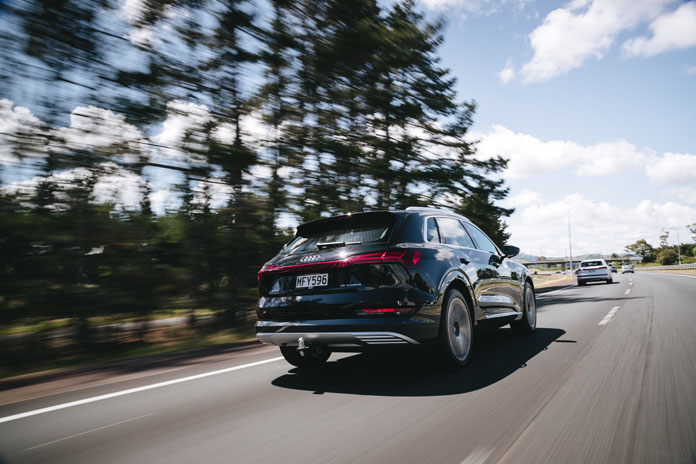 With a range of around 400km, it’s safe to say this SUV would take you a fair distance without the need to recharge the 36 cell modules mid-trip. At least not in urban conditions. So, there’s no need for it to do as the sheep — constantly munching grass to refuel.

The first of a slate of new electric and hybrid models to come, Audi may have been slow to charge in to the fray, but has benefitted from the lessons learnt by those taking the lead. The result of that is a drive and ride that approximates a regular car but with the benefits of a quieter journey and instant gratification for the driver.

Zipping from 0-100kmh in 5.7 seconds (with a little boost) is not just a factor of instant torque and powerful motors, but also a result of design elements that allow the drag coefficient to be at a low 0.27, which is not common in the SUV segment. 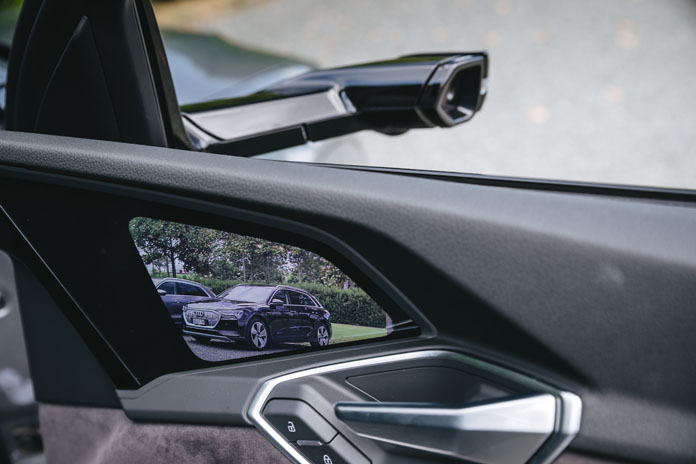 But to attain that, you would need to have the version of the e-tron with the virtual exterior mirrors, which is making its debut on a production car. Now this takes some getting used to. Your eyes will have to adjust to the fact that you don’t have a mirror to check on traffic behind you, instead you’ll have to glance at two screens, placed on the front door panels where the window meets the dash.

In right-hand drive cars, looking to the left requires slight eye level adjustment, but on the driver’s side, due to the sharp viewing angle, you tend to take longer than you might be comfortable with. It may be a matter of getting used to, but don’t get into an accident as you’re getting accustomed to this feature. Especially since the e-tron is quick off the mark. 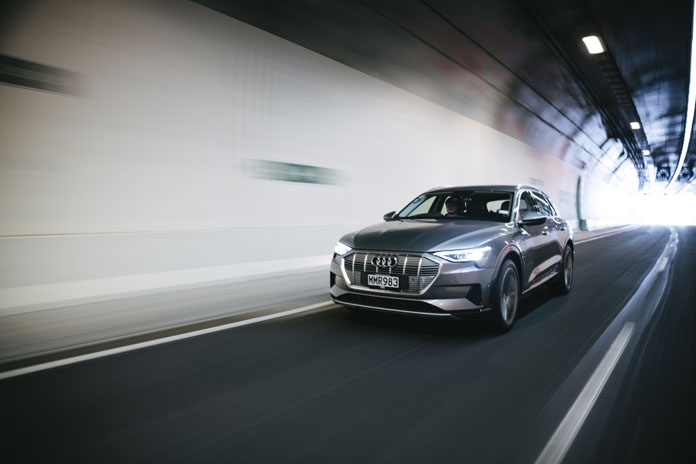 With Audi drive select offering seven profiles to choose from, the drive doesn’t have to be boring. In comfort mode it’s a cushioned ride, while in sport mode, things get firmer, with the air springs adjusting to the road conditions and making full use of the 76mm of play in the ride height.

Some of the driver assists, like lane discipline can be annoying as it holds to its objective regardless of the terrain. In general, while it might be a good to have, it shouldn’t be a crutch. So, you could switch them off and stay vigilant, as you’re supposed to. You never know when a sheep might bounce onto the road in front of you. 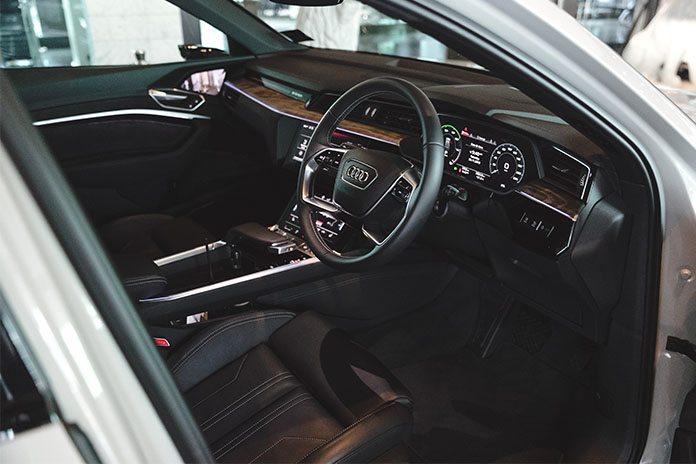 Those familiar with the Audi set up will appreciate the general familiarity about the cabin layout. Other than the fact you don’t crank an engine to life, you get a good driving experience in the e-tron, and you get it a lot quicker. Those unaccustomed to driving electric will be initially silenced by the silence, but should not be too long in appreciating its benefits.

Powered by two electric motors, delivering 300kW and 664Nm of torque, the e-tron runs silent and fast, up to a limited 200kmh. A new generaiton of quattro manages the drive torque between the axles, whether it’s for more power or to manage slippery conditions. 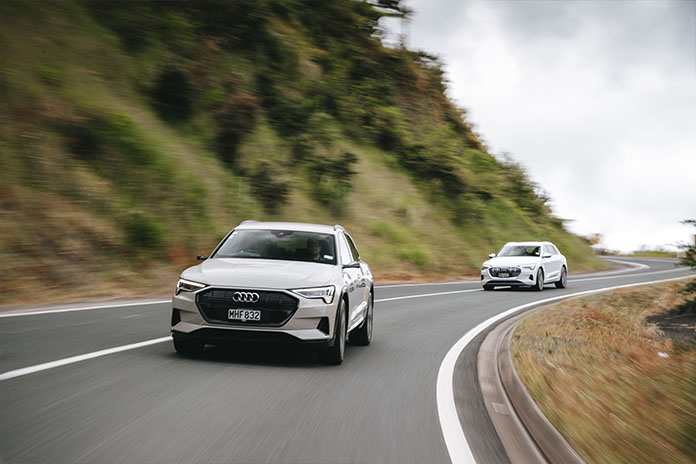 Lodged between the axles are 700kg of battery power, which helps to bring the centre of gravity down to that of a sedan. This makes for a nimble drive, without too much of that top heavy feeling you get in a larger SUV. 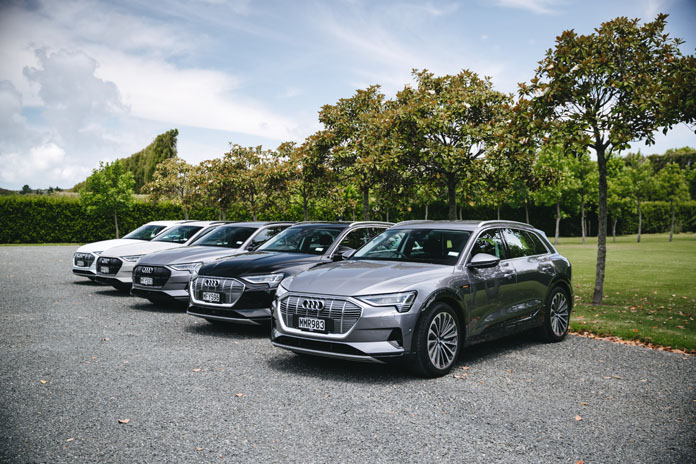 The paddles on the steering allow you to decelerate without the need to use your foot on the brake pedal which activates the first full by-wire brake system. Braking and deceleration help to recover energy, with the electric motors functioning as a generator that converts kinetic energy into electric energy.

The large, high-voltage battery in the e-tron can store up to 95kWh of energy, which allows for the long range, and if the need arises, a quick direct current charge could see you continuing your journey after a half-hour pit stop. 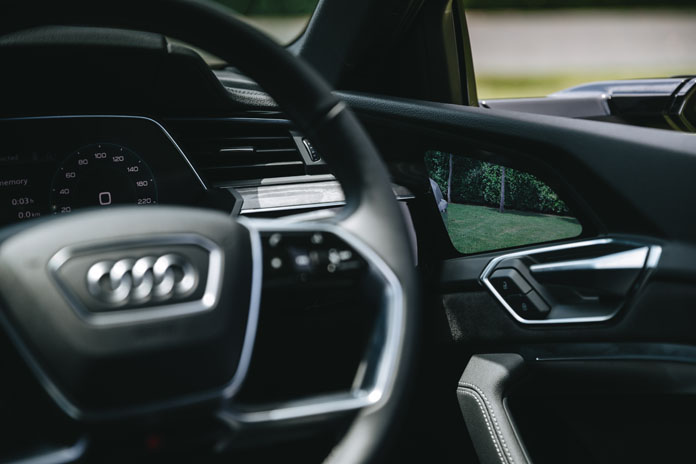 Mindful of the generation this model is meant to appeal to, the e-tron is packed with connectivity features. Your mobile phone fits right in, with wireless charging and easy setting up. The media centre MMI navigation includes a Wi-Fi hotspot so everyone can continue with their device devotion. And should you want to pump some music through the cabin, there are two sound systems to choose from — the inhouse Audi or Bang & Olufsen systems — though there’s not much to separate the two beyond their specifications. 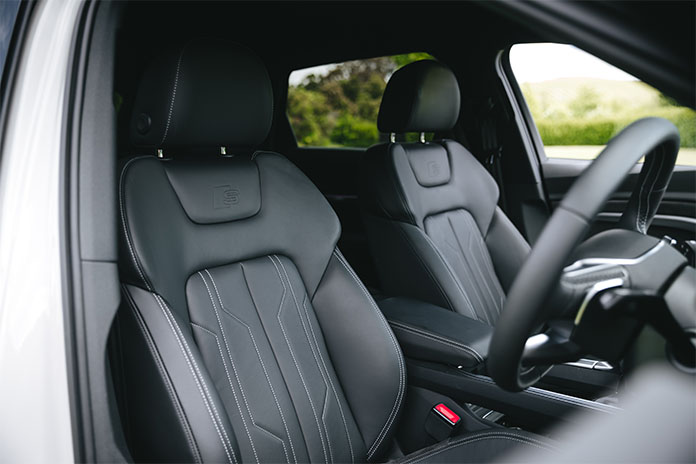 The comfortable, if somewhat firm, stylised seats with the circuit board stitching keep to the electric theme, and glides into position smoothly. Creature comforts are well attended to and you can’t want for much else, which helps to normalise the driving experience so that the switch from petrol to electric is easier.

The sheep are going to have a less worrisome time.

The Audi e-tron is in Singapore and is priced from $367,500 inclusive of COE and VES.