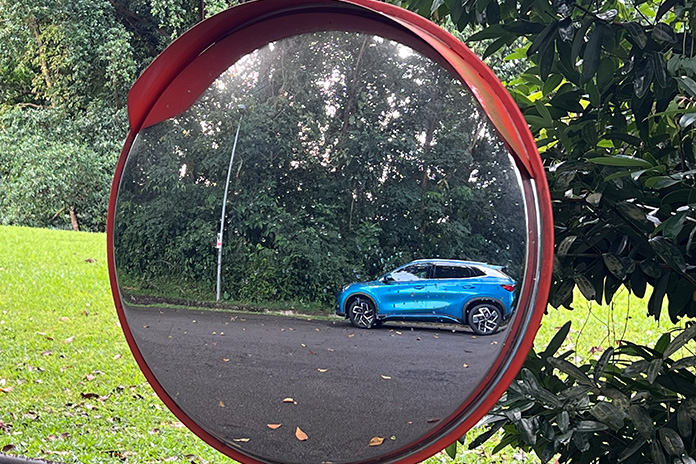 IT used to be that where the car was made had an impact on the purchasing decision. If it was made in Germany or Japan, it had to meet the required standards, and was a more desired choice. Robots did a lot of the work, and these countries had a work ethic the world held in high regard.

But cars made in Italy, France, UK and USA were often viewed as slightly unreliable in terms of build quality. And China-made cars were once derided.

But these days, as expertise criss-crosses companies and continents, the notion of a poorly built car is not a top-of-mind issue. And many new car companies have joined the race, especially as electrification kicks in globally. 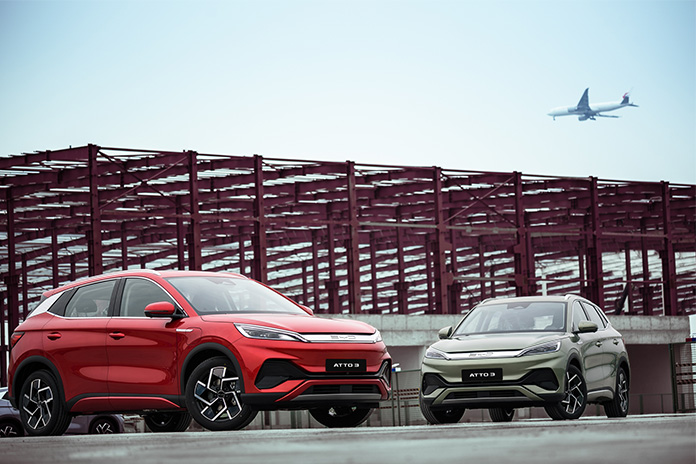 BYD has been producing electric vehicles since 2003, almost a decade after entering the battery market. Its cars have been making inroads into several markets. It produced close to 750,000 EVs in 2021 and sells in 70 countries, entering Singapore about a decade ago.

Here, their early presence was obvious more as part of a taxi fleet, but that has expanded with the E6 and now the smaller SUV, ATTO 3. 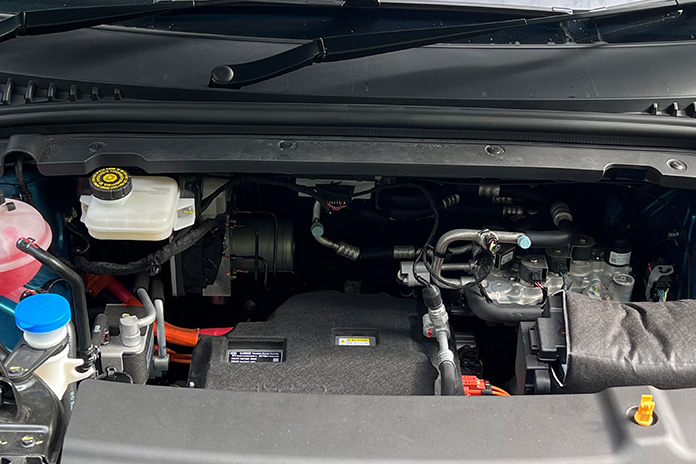 The ATTO 3 delivers a typical electric drive. Instantaneous power as soon as you hit the accelerator, though it’s not quite so snappy as the EVs of many other brands. But its power delivery is consistent across drive modes, making it a well-managed and well-behaved performer.

With 150kW of power and torque of 310Nm, the ATTO 3 takes a seemingly leisurely 7.3 seconds to get up to 100kmh, and then on to a top speed of just 160kmh. But with a range of 480km, and shrewd stops en route, you could enjoy a holiday across the Causeway in some comfort; though it might be a bit tight in the back. 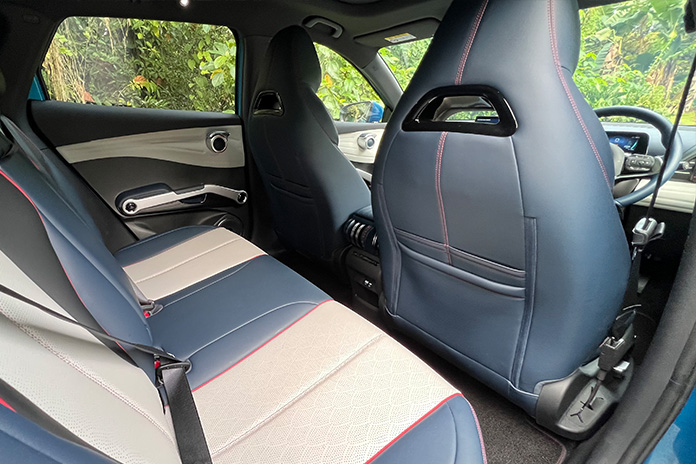 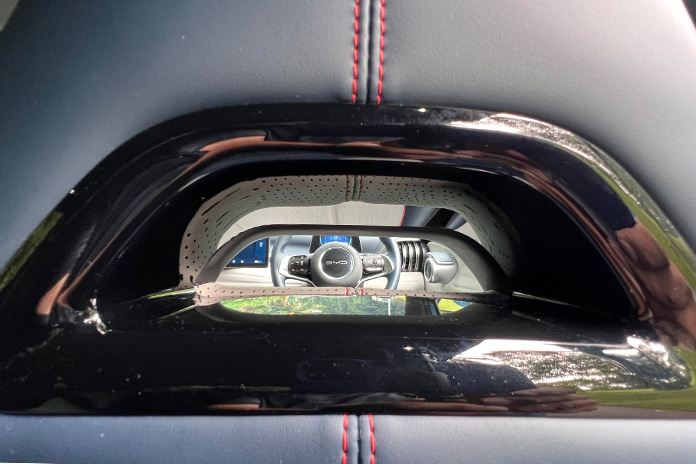 The difference lies in the interior of the ATTO 3, where a slightly more unconventional mindset has prevailed. The feeling afforded in the cabin is that of contemporary comfort. The ambience in the cabin is one of muted restraint, with mild colours and soft contact points. The two-toned leather seats are good for long journeys.

There are flashes of design smarts that pop up, like the ringed air-con vents and door handles that look like large molluscs that you grab and attempt to rip off the shell each time you open the door. 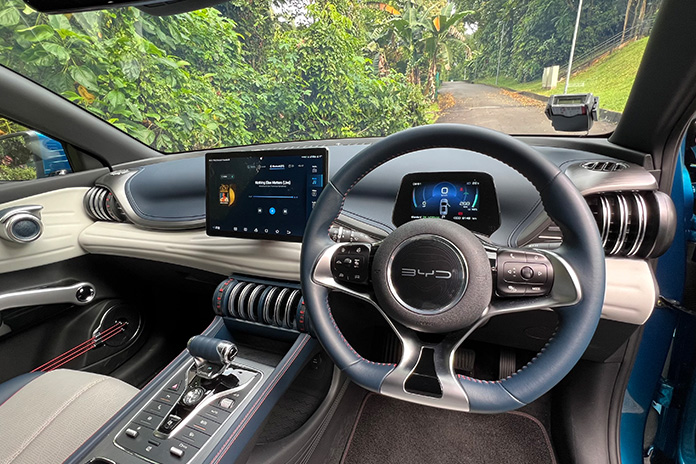 And there are strings that serve to hold your things in place in the door compartments, and which could also make for a good instrument if you’re caught in a traffic jam, or stopped long enough at a traffic light.

The connectivity to smart devices is efficient, even if at times it is not as it should. For instance, the album art on the screen was not in sync with what was being played on the smartphone, which may bother some more than others. A future software upgrade may resolve this issue, as is often the case in modern cars.

Over-the-air updates ensure cars are performing to optimum efficiency and capability, and saves you the hassle of going to a workshop to keep your vehicle up to speed.

The big screen that dominates the dashboard can be viewed in landscape, or at the push of a button, in portrait mode. Most of the set up for the car’s features are configured here. On the move, it offers more room to miss your intended objective if you’re trying to make minor adjustments. 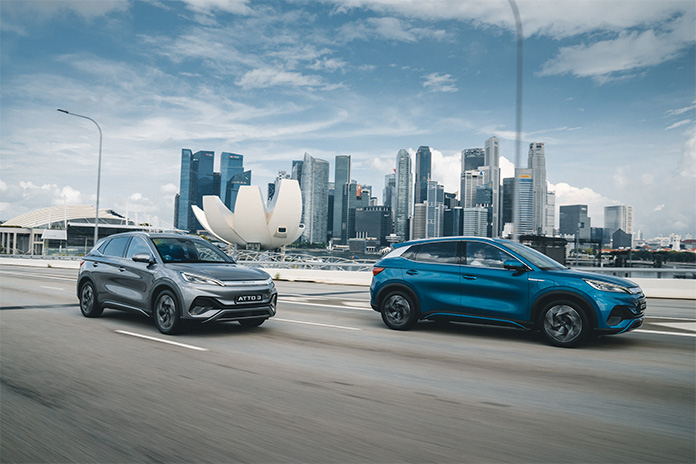 Equipped with many safety features that are now becoming standard in modern cars, there are also some annoyances to deal with. When it’s on the move, the ATTO 3 generates a sound like there’s a fairground in the vicinity. The special sound is not loud, but is meant to warn pedestrians of the otherwise silent EV’s presence, especially at low speed. Good if the sound could have been kept out of the cabin. Other noises that might irritate include the indicator tone. Fortunately, this can be changed to a more familiar sound.

Too Much Screen Time

But every change requires tapping on the screen, sometimes poking your way through  levels of menus and sub-menus. That said, there are many conveniences that come with EVs. There are numerous options that can be programmed to customise the car’s settings. 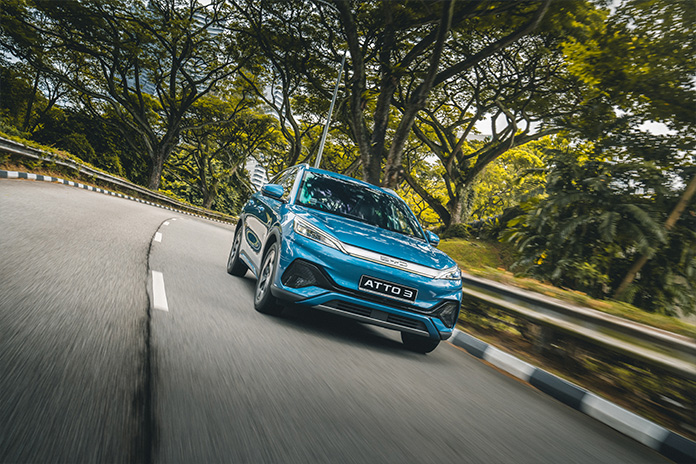 There are fewer parts as compared to a car with an internal combustion engine, which means the cost of maintaining an EV is lower. An EV motor has two moving parts, as opposed to 40 in an average 4-cylinder engine, which also requires regular oil and fuel filter changes, timing belts that require maintenance, and more.

However, the cost of buying an EV is still a major hurdle for many, especially when governments see an opportunity to shock your wallet with costly administrative paperwork, even before you have your hands on the actual car. 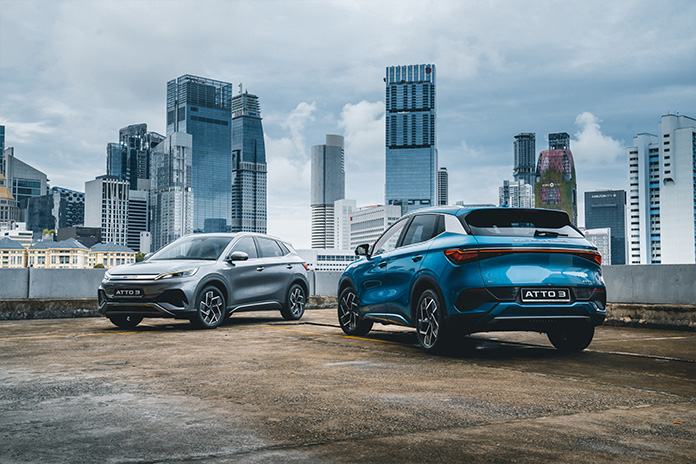