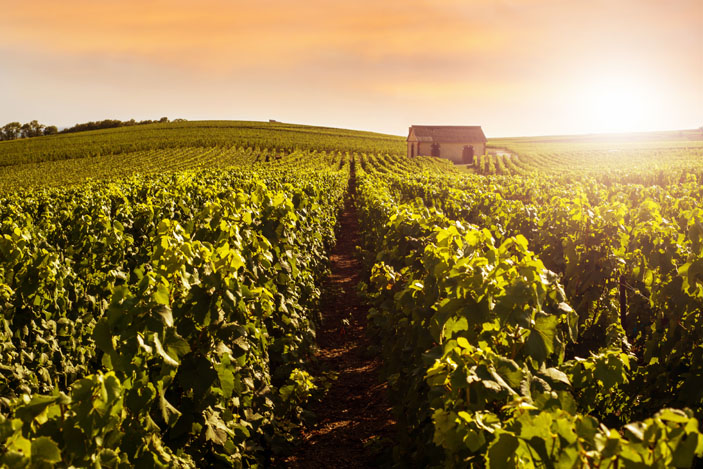 IN ONE of the most recognised regions of France, the fruits of generations of labour are bottled for celebration. But champagne is more than just about the bubbly.

A wedding brought me to Champagne, France, where I imbibed of the ambience and aroma of a charming part of the country that has been celebrated the world over. I found myself in a little village playing pétanque under a late summer sky with my niece’s new family. Her husband, Aurelien, works in Singapore, but his cousin’s family owns the Leclerc-Mondet champagne house.

The trip gave me a new perspective of the “wine of kings and king of wines” that is an antithesis to its pretentious urban reputation — there’s nothing like ‘pairing’ escargot pizza with champagne to cure that notion — and with it, insights into family and the business of bubbly.

“Champagne is a place, not a drink,” said Fabien Leclerc, son of the family behind the champagne house Leclerc-Mondet in a cool, dim cavern infused with the aromas of fermenting grape juice in giant vats. 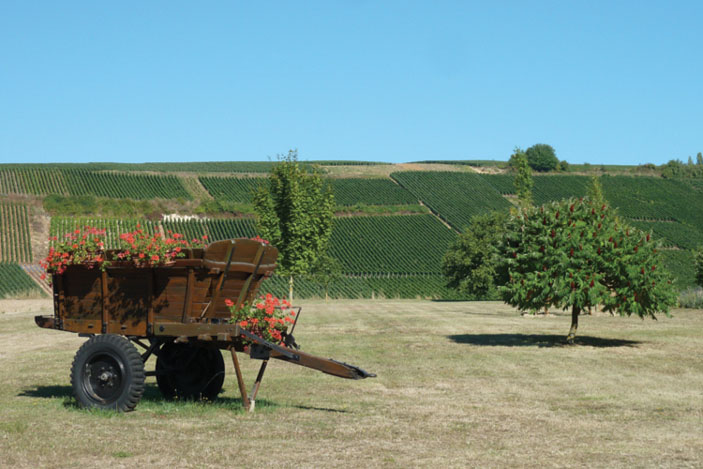 We are in Chassins, 150km from Paris, a very typical Champagne village according to Aurelien. In numbers, it meant a population of about 150 people — and some 10 to 15 champagne houses.

“What you know are the big champagne brands that export everywhere,” he explained, “but there are thousands of small champagne houses that sell their champagne to family and friends.

“There are probably around 12,500 different brands of Champagne.”

According to Comité Champagne, the trade association that represents the interests of independent Champagne producers and houses, there are 16,000 growers — of which 5,000 sell champagne under their own name (like Leclerc-Mondet) — and 320 Champagne houses.

In 2013, the harvest of Pinot Noir, Pinot Meunier and Chardonnay grapes, which predominantly make up Champagne, yielded 349 million bottles of Champagne, of which around 167 million bottles were exported. The top three importers of Champagne are the UK, USA and Germany, with Japan fourth, and the only Asian representative in the top 10.

All these bubbles of Champagne information are going to my head. 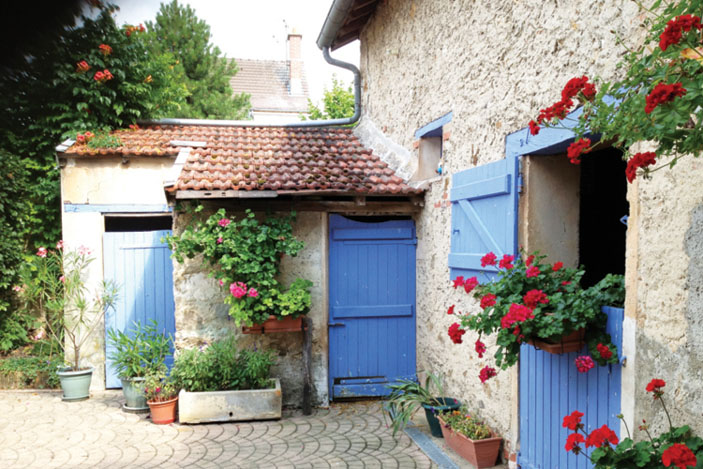 As a luxury item, demand for Champagne is still growing — in good times and in bad, there’s a need for drink.

“There are a few new Champagne houses opening every year,” says Aurelien. “You only have to leave and work outside to realise the money can be good in Champagne, then you come back. People here get annoyed with those who leave and come back to start a Champagne business, especially if they were not connected to the business before.”

I read in his words a passion among those who understand Champagne literally from the ground up. His family has three generations in the vineyard business.

“By eight years old, we were in the vineyards, and by 12 we knew how to do almost everything.”

Things change slowly in Champagne, in spite of technology. “Some machines are bigger,” Aurelien admits, “but we still do a lot of things manually. We still use the same amount of machines over the years. They got better but we don’t use them for anything new that we didn’t before. Maybe some of the painful stuff, like plucking out the sick vines, which we used to do manually we now use tractors to help us. And before, we couldn’t go onto the very steep slopes. With better machines, now we can.”

Eat Your Way Around The World At WGS2017

Why the 30% Water Hike Deceives The CPI

Even with machines, cultivating grapes remains hard work. “If I run away from it,” says Aurelien, who works in computer animation in Singapore, “it is because I know how much hard work it is!”

Yet, he adds, “most people will tell you they like it very much, because it is interesting work. Winter is the most challenging time of the year because you decide which part of the plant to cut, what to keep, what is going to give the best shape to your vineyards the next year. We can do about four rows a day, which is about 160 plants in a seven-hour workday, as the sun sets pretty early and rises late,” says Aurelien. “We start in November and end in March.”

There can be as many as 10,000 plants in a hectare, and it takes about five minutes per plant for a seasoned hand to assess, prune and set the cuttings aside for collection. Incidentally, vine wood makes great fuel for a barbecue. Assuming five minutes for each plant, that means over 800 hours for inspection and pruning, never mind removing poorly performing vines and replacing them — work that leaves hands bleeding even with gloves on. 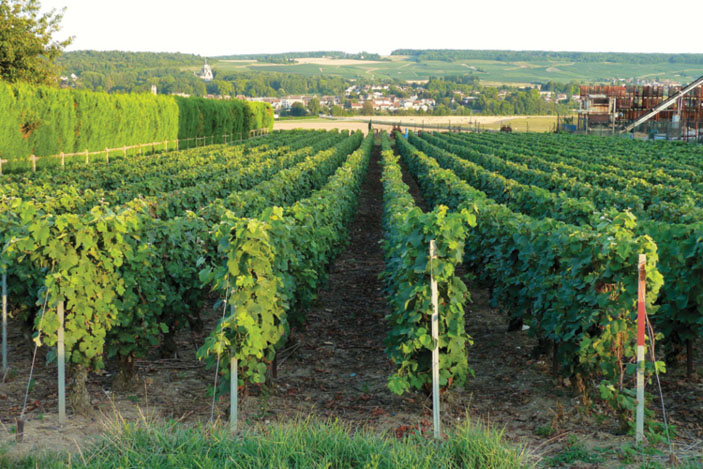 Aurelien’s parents currently manage over 30 vineyards, but it was his grandfather who shifted the family’s livelihood from milk cows and wheat towards viticulture when the changing economy made farming less profitable. I zoomed past one of the last of a handful of farms that still exist in Champagne, scanning stubbly, cropped wheat fields and barns while hanging on to Aurelien as his quad bike roared through sunset and dirt on a country track, with him yelling out highlights of the landscape we passed.

Farms like this are safe in Champagne. Le Comité Interprofessionnel du vin de Champagne (CIVC), the organisation that controls the production, distribution and promotion of the wines of Champagne, regulates the size of the harvest and limits wine production to maintain market value. Champagne has maximised its 28,700ha of land set aside for vineyards, regardless of global demand.

“My cousins sell everything every year,” says Aurelien. As a small-to-medium-sized operation with access to 10ha of vineyards, Leclerc-Mondet produces seven varieties of Champagne that can add up to about 100,000 bottles annually, given an average harvest.

“Even before the grapes get to the little Champagne houses, you always have the big houses like Moët & Chandon that come and source for more juice every year. They will buy from you and put their name on it.”

But small producers who once sold their wines to these big houses or stayed within France are now going into direct retail with Champagne that costs a little less but is no less as good.

Many vineyards are still family-owned and run, like in Aurelien’s family. His mother rents the land from his grandfather and handles administration, and his father manages the vineyards with an arsenal of tools in a capacious barn that includes heavy machines like the tractor. Rent is traditionally paid two ways: By way of an agreed annual fee, or the ‘thirds’ method where one-third of the harvest goes to the land owner, one-third to taxes and the last third to those who actually work the land for a livelihood. The family takes pride in the immaculately groomed 6ha of vines under their father’s care.

Cash In The Bank Or Cash And Carry?

Walking With Your Thoughts

Nectar Fit For The Gods

“Farms in Champagne used to be very extreme with fertilisers and pesticides, then ecological companies got into the picture and started complaining,” says Aurelien. “The Marne River had a few cases where tons of fish died when the pesticides washed down, so the vineyards have turned much more ecological in the last few years and they are really making an effort to keep it cleaner. Less and less chemical fertilisers and pesticides are now used and some vineyards are 100% eco-friendly, using only organic fertiliser and no pesticides. So we tend to produce a bit less but we pollute a lot less.”

The biggest threats here are plant diseases and the vagaries of the weather. Bad weather could mean no money at the end of a year of hard work. Vineyard managers and owners may get a reprieve, however, if they anticipate well and build a reserve of juice from good years when they exceed the harvest quota set by CIVC. 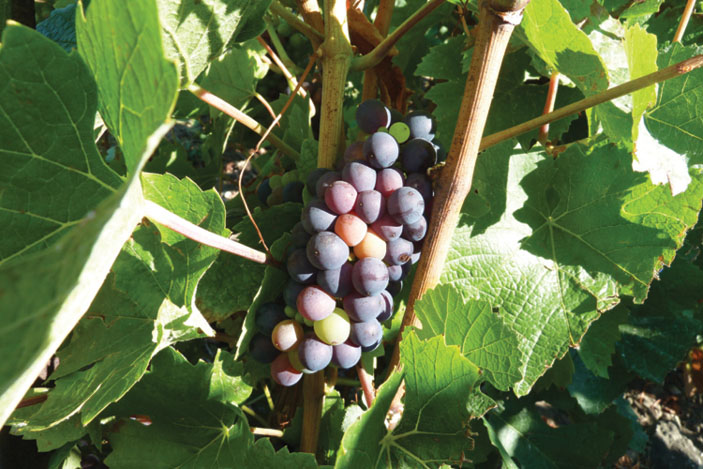 Meanwhile, there is a relatively new stream of income for some in these Champagne villages — tourism.

Wine tourism is big in France, and Champagne is favoured by the British, Dutch and Swiss. “Little guesthouses here will point you to the local Champagne houses, and there are many websites,” explains Aurelien. His grandfather’s old farmhouse has been sold and the new owner has converted it into to a beautiful micro hotel, the Clos de Chassins, with just four rooms. Many tourists are actually looking for places that are not well known, like these small Champagne houses that are hidden in a corner of a village. Families on a leisurely driving holiday looking to spend at least a week in the area can pick from a choice of homes to rent through the Gîtes De France network.

Tourists can drive up to a Champagne house and ask to see what there is and try some Champagne. A lot of houses now have opening hours, from 1–5pm, or by appointment.

Wine Is For Drinking

These houses will also customise champagne bottles to commemorate occasions from christenings to weddings. Apart from 400 personalised bottles for this particular wedding, the pièce de résistance was a balthazar, a 12-litre champagne bottle (second in size only to the biggest, the 15-litre nebuchadnezzar).

I wondered about its value to those who invest in wines in cities around the world, only to get a bemused reply from Aurelien: “Wine collectors? We don’t collect wine. We drink it. I’ve never had this conversation with anyone here.

“Champagne doesn’t really get better with time. It’s best to drink it within five years.”

Aurelien says wine speculation doesn’t happen very much in Champagne. There is a small market for vintage champagne but it is mostly some big champagne houses that keep old champagne for people who like them.

See also  Joy And Sorrow At The European Film Festival