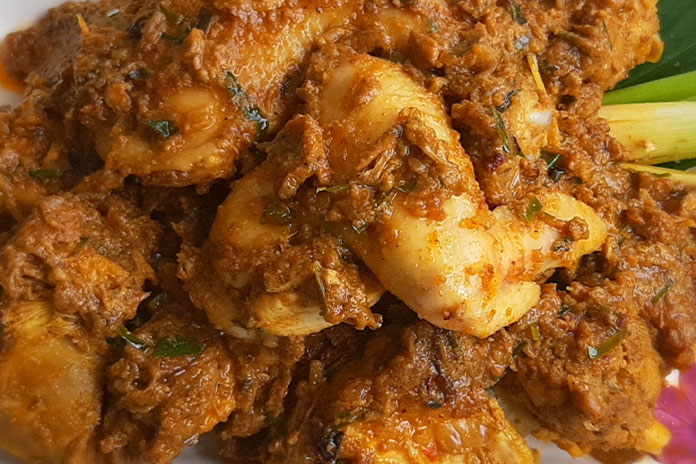 A: To Prepare Chicken

1. Make kerisik: Heat up a frypan over medium heat. Put in coconut to toast until golden brown and fragrant. 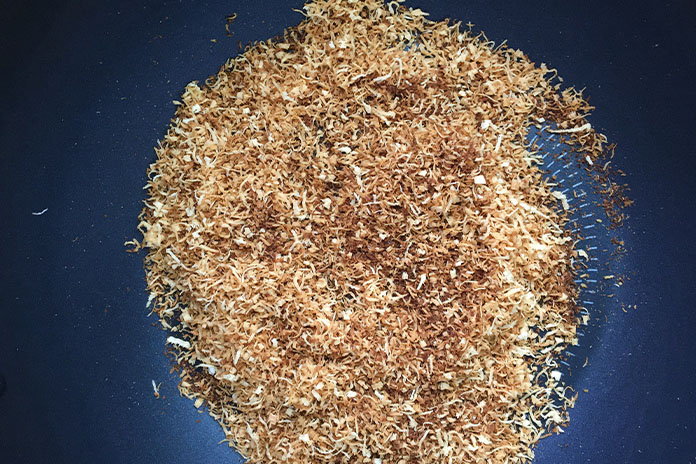 While it is still hot, pound it in a pestle and mortar or grind it in a food processor. 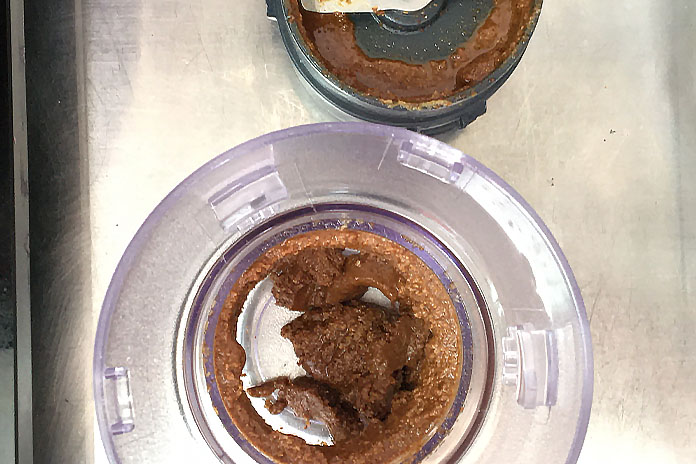 Set aside 2 tablespoons to add to this rendang. Bottle remining kerisik in a jar for future use.

2.Wash and pat dry chicken. Marinate with salt and turmeric powder. Set it aside.

3. Prepare spice paste:  blend all ingredients (except water and oil) in a food processor. Transfer paste to a bowl and set it aside. Pour water into food processor, give it a quick pulse. Set it aside. 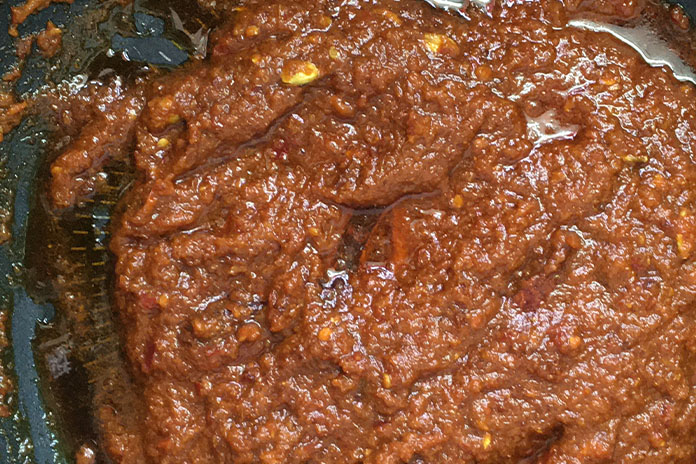 4. Heat up oil in a saucepan or wok. Add A spices; fry a few seconds until fragrant. 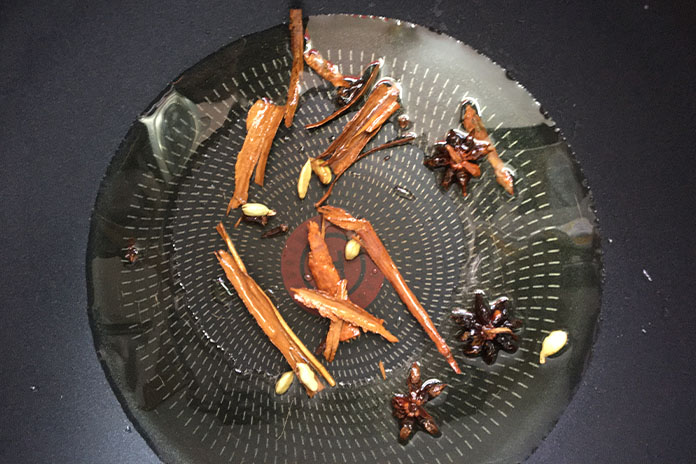 5. Add in rempah under B ingredients. Cook over medium heat until it reaches pecah minyak stage – this is the stage where the oil separates from the paste indicating that that the rempah is sufficiently cooked.

6. Add in chicken, D ingredients followed by coconut milk and water from food processor. Stir until chicken is evenly coated with rempah. 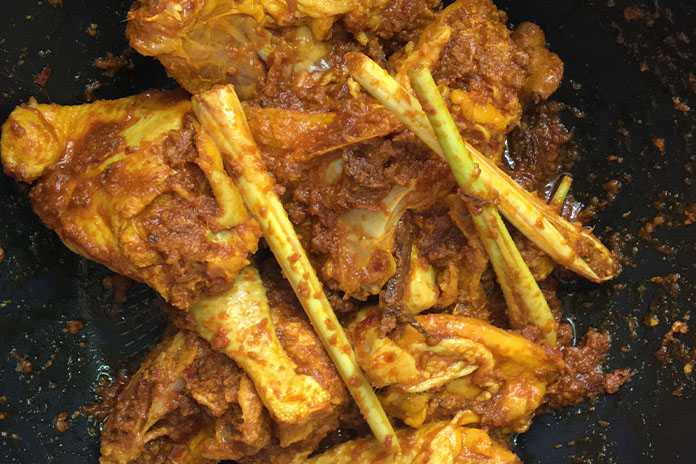 7. Bring it to a quick boil, then reduce to low heat. Cover and simmer until chicken is tender, approximately 20-25 minutes. Pour in boiling water if sauce thickens too fast. 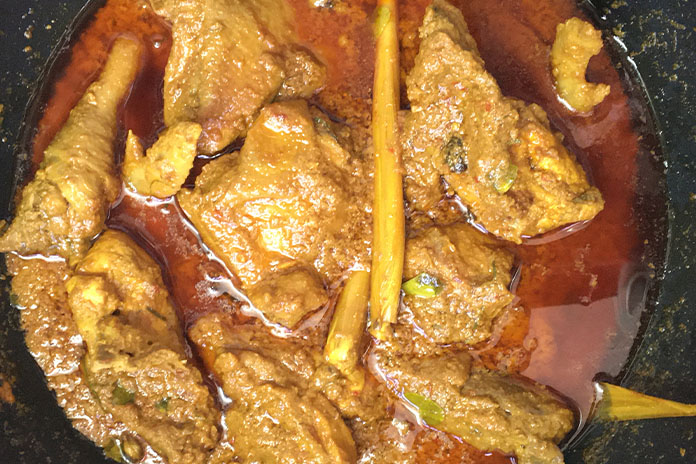 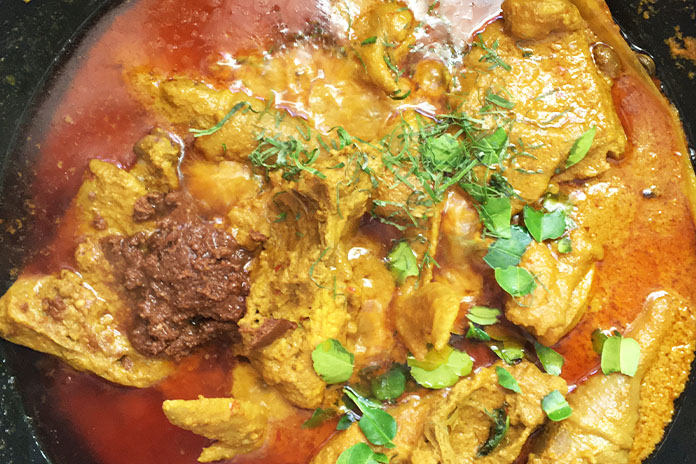 Next, toss in sliced leaves and stir it in. Simmer 5-6 minutes, then turn heat off. Adjust seasoning to taste.

9. Allow it to stand overnight or a few days in the fridge for full-bodied flavours to develop.

SERVING TIP: This rendang is particularly good with lemang which is glutinous rice cooked in bamboo tubes over charcoal.

TECHNIQUE: A tasty rendang needs gentle and slow braising for full-bodied flavours to develop. Traditionally, a rendang is cooked until it is almost dried up as it keeps and travels well without turning bad fast.

*The 250ml of oil may seem excessive but a good curry or rendang needs sufficient oil to tumis (fry) the rempah until aromatic. This in turn flavours the meat while it cooks. Oil will float to the top when meat is cooked. At this juncture, you can opt to spoon some of it out. Alternatively, refrigerate the rendang. The oil will solidify, making it easier to scrape it off. Before deciding to remove every drop, consider this age-old curry cooking technique: the layer of oil serves an important purpose – it slows down any fermentation of the coconut milk that often happens in tropical climates. When coconut milk turns sour, you risk tipping out the entire pot of rendang. So, if you really must, scoop away some oil but leave a thin layer.

See also  Fried Snapper With Chilli Sauce – Whip It UP!