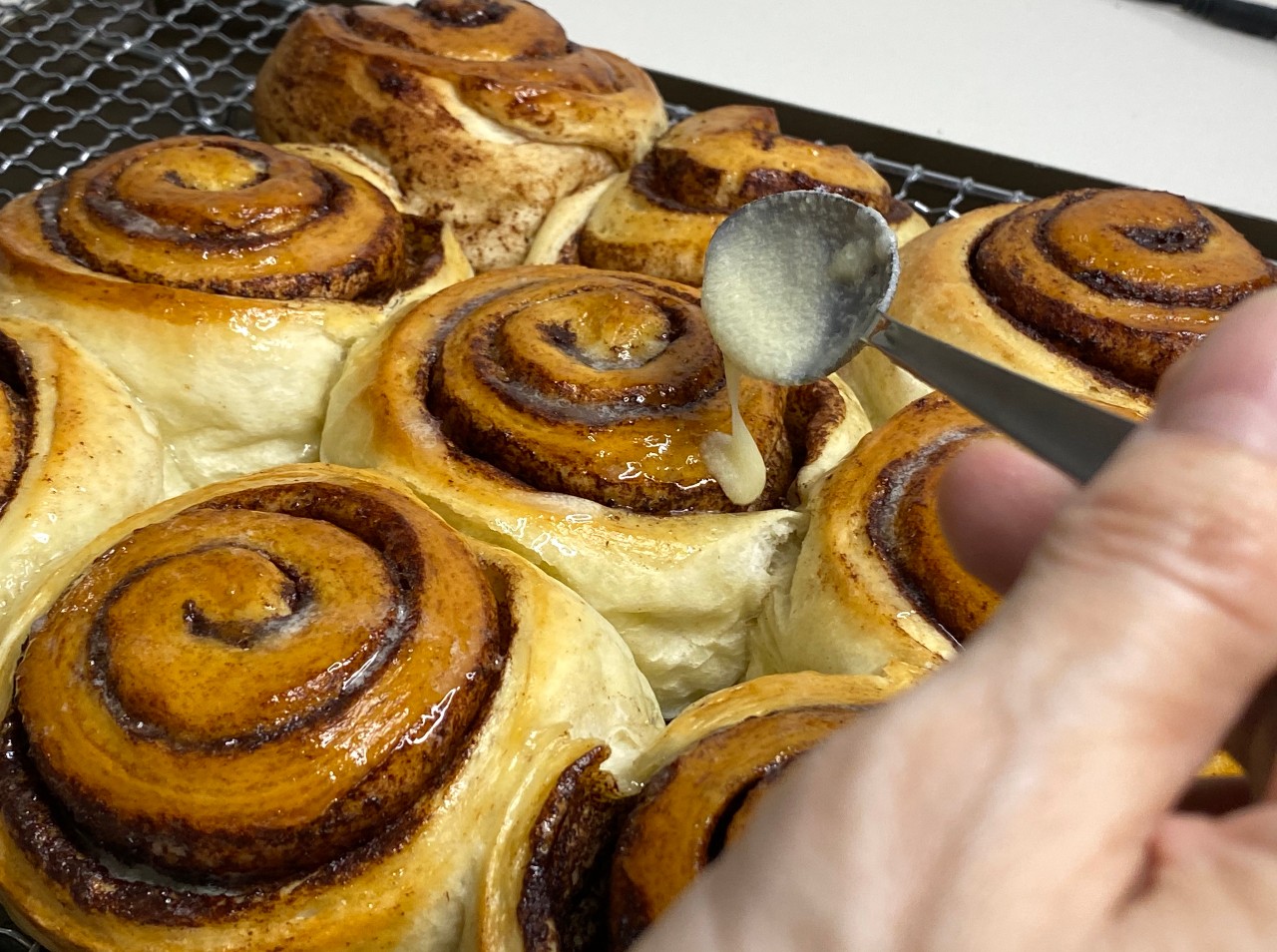 CINNAMON was once a rare and expensive spice before its commercial cultivation in the 1800s. When the Dutch conquered Ceylon in the 1500s, they also seized monopoly of the cinnamon trade for century. With its mildly spicy yet earthy nuances, Ceylon cinnamon soon found its way into sweet and savoury dishes especially curries. Nothing could be more inviting than freshly baked cinnamon rolls glistening with a glaze. Tear into tender crumb and let the warmth of cinnamon warm up your belly while you indulge in this baked confection.

1 egg, beat with a fork for egg wash

1. Sponge: In a small container, combine A ingredients. Set aside for at least 1 hour at room temperature. It will bubble up and double as the yeast is activated.  In baking, a sponge refers to a bubbled mixture of flour and water which acts as a leavening agent. 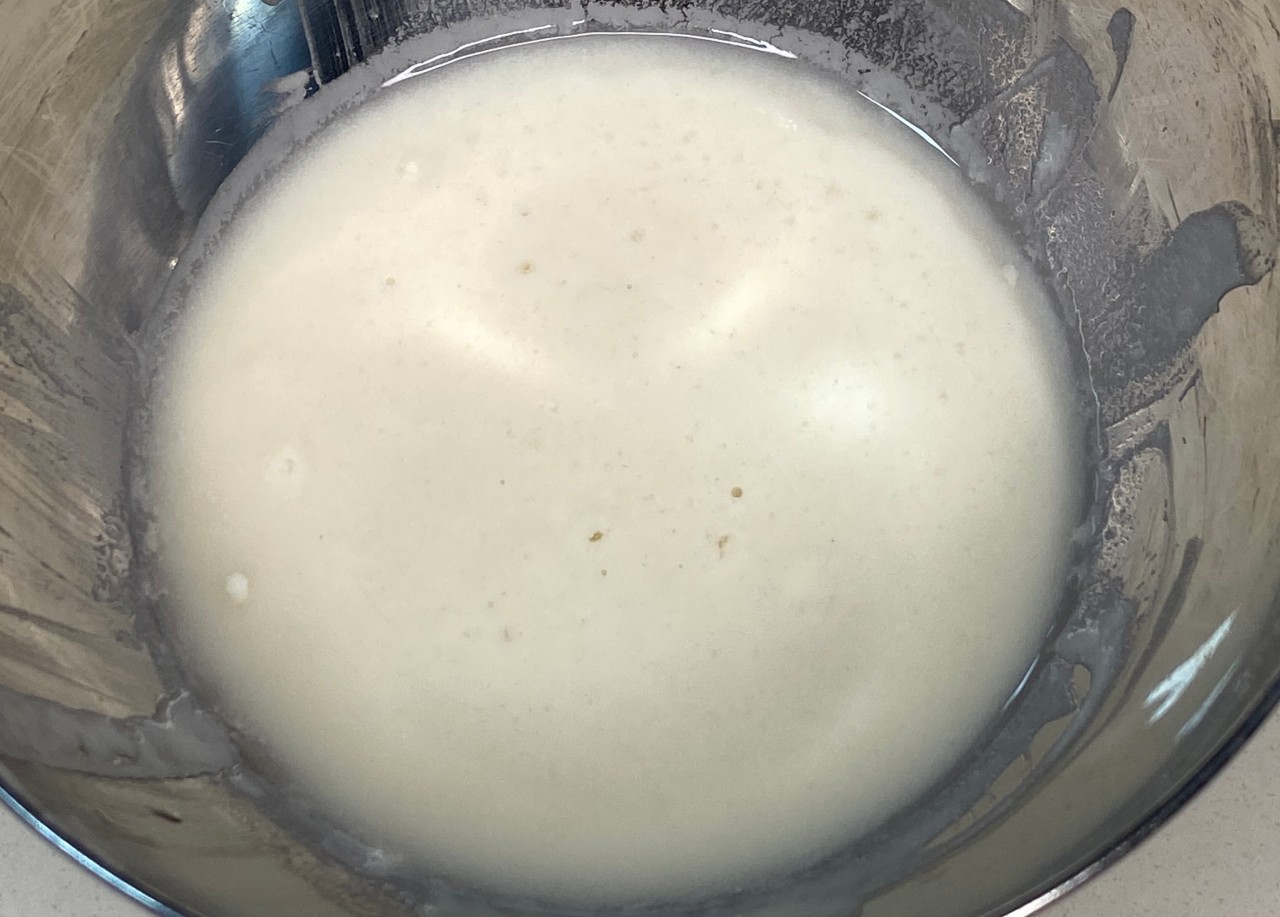 2. For main dough: In stand mixer fitted with a dough hook, knead all ingredients including sponge except butter and salt for 5-8 minutes.

4. Transfer dough from mixing bowl onto kitchen counter or silicone matt. Roll it into a large ball. Cover and rest 30 minutes until dough doubles in size. 5. On a floured work top or silicone mat, roll out dough into a rectangular about 25cm by 38cm using a rolling pin.

6. Using a pastry brush, brush butter on it. Next, dust it with cinnamon sugar.

7. Roll up dough tightly on the short side. Then, cut into 2.5cm pieces.

8. Brush a 25cm x 25cm baking tray with a thin layer of oil. Place buns on tray and cover with kitchen towel. Proof for 20 minutes or until buns increase in size. 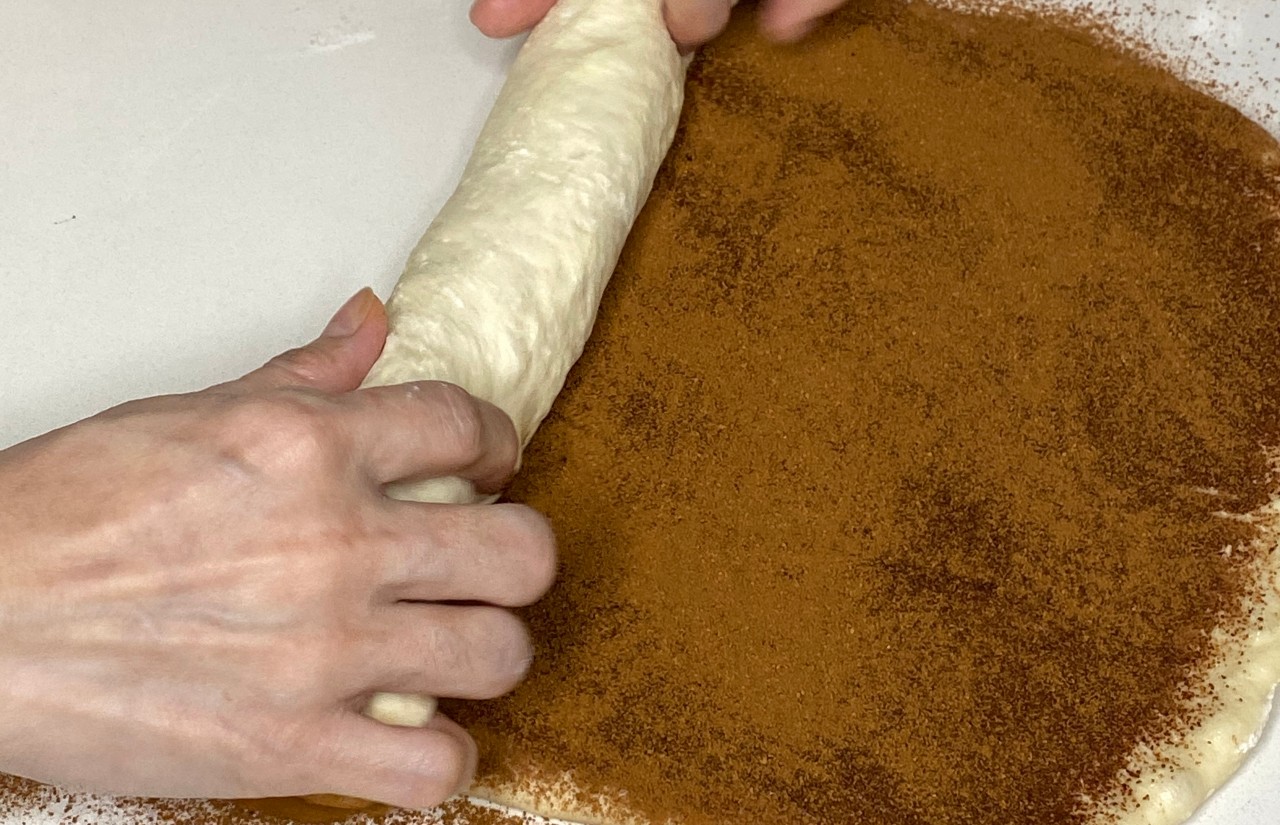 11. While rolls are baking, mix glaze until icing sugar melts and it has the consistency of pouring cream. Set it aside.

12. Remove rolls from oven. Transfer onto a cooling rack. Drizzle glaze over rolls immediately. They are best eaten while still warm – let the cinnamon sugar melt on your palate as you bite into it. 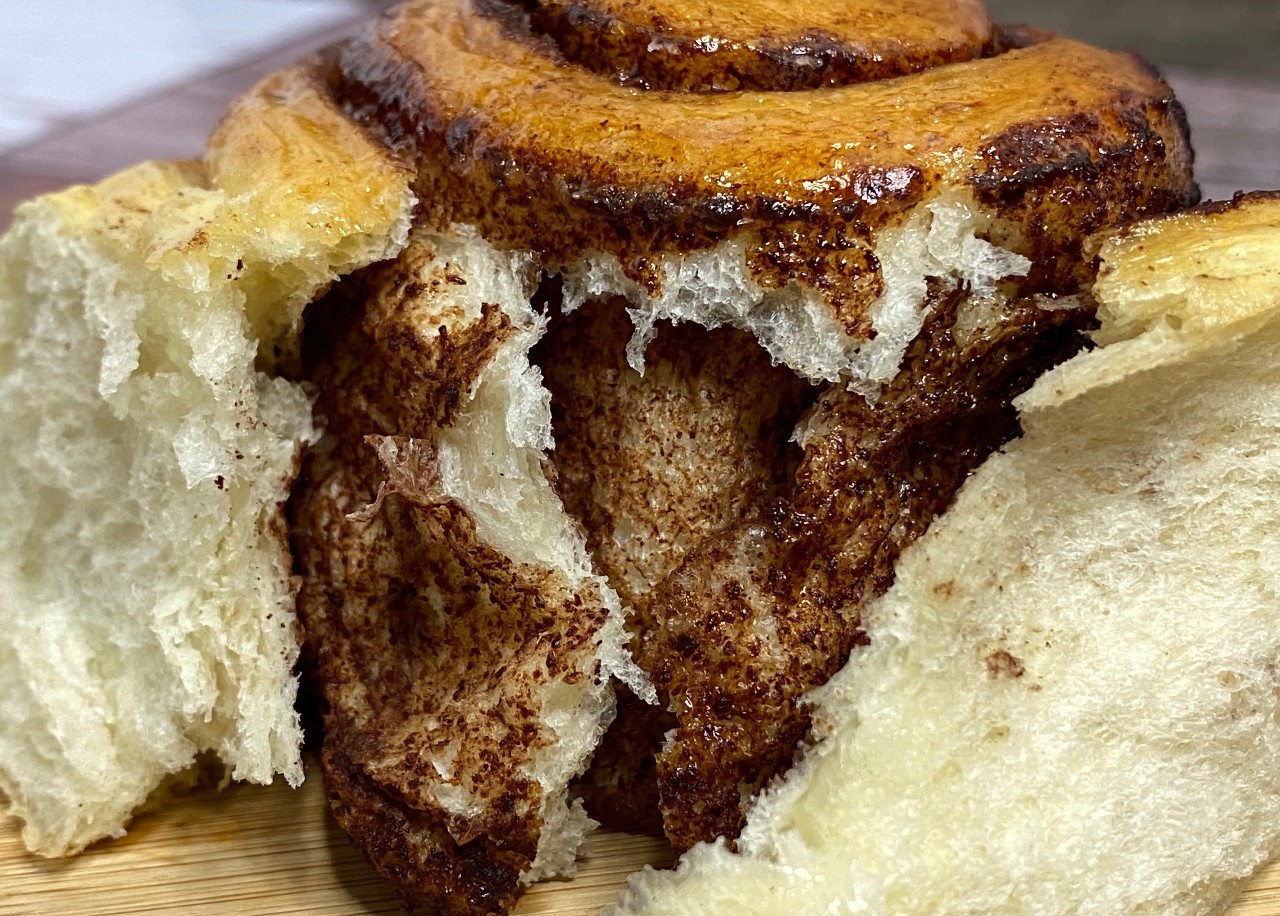 TIP: Using a sieve, sprinkle cinnamon sugar for an even distribution over the dough. 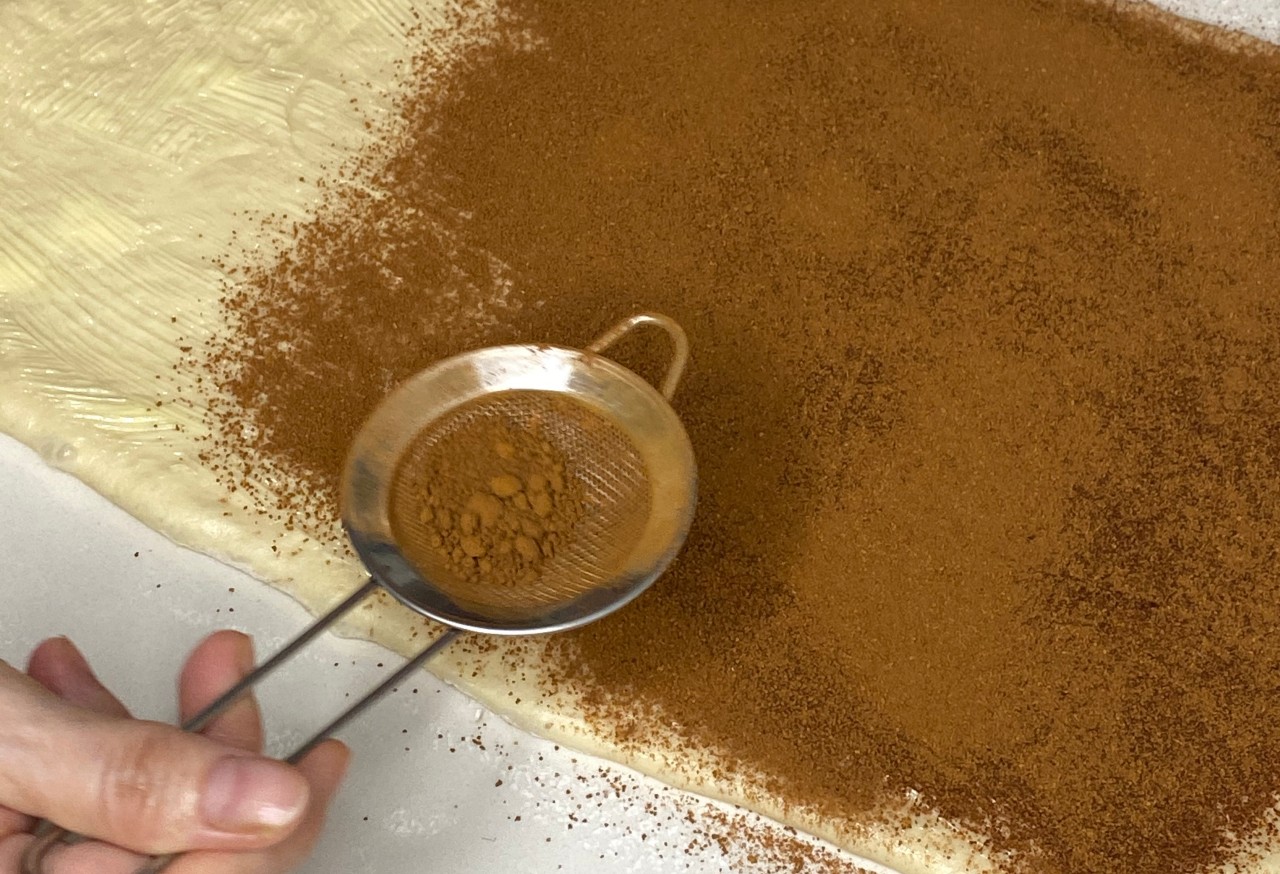 TECHNIQUE:  To check if dough is sufficiently kneaded, do a window pane test. Pinch a small piece of dough – using both your thumbs and index fingers, gently stretch dough in opposite direction. If it can be stretched without breaking or tearing, the gluten is well developed. If not, continue to knead another 3-5 minutes and do another window pane test.

About Joyce Yong: Joyce’s oven has been firing for the past 20 years turning out all manner of scrumptious bakes from Chinese pastries and confection to Western goodies including sourdough for family and friends alike. She imparts her baking skills through occasional baking classes.

See also  Sautéed Prawns and Chorizo — Whip it UP!