IT IS not often you see the quick-witted and witty Damian D’Silva at a loss for words.

But ask him how many recipes he has in his memory bank, and he struggles. For a while, you can almost hear the grey matter churning as he tries to add it all up, before he decides to toss the towel in on this one. 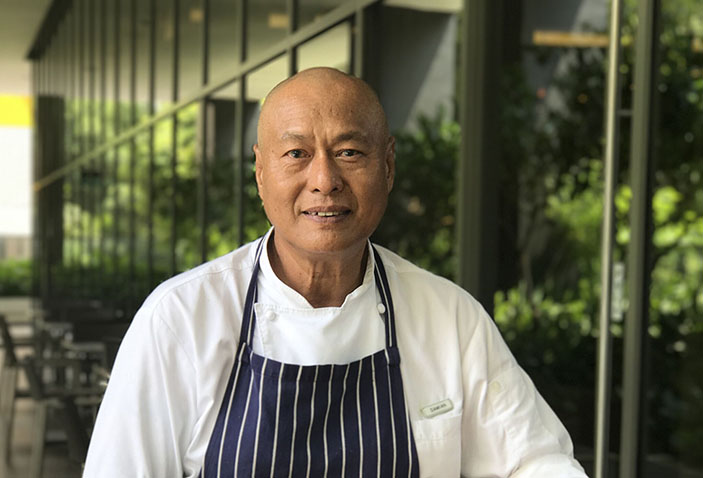 One year into Folklore’s existence, D’Silva is still stirring the pot of stories and anecdotes that have grown his reputation for serving and preserving Singapore’s heritage food.

His journeys through restaurants have not left him short of fans, and if anything, people will follow where their noses and taste buds will bring them.

In the long dining room that is fronted by the Your Destination hotel’s check-in counter, the cosy ambience of Folklore is like a community hall humming with chatter and always rich in the heady melange of spicy aromas of colourful dishes being served.

The Eurasian-Peranakan chef believes that creating food is less of a science and more of an emotional feel.

“It’s done with love, and the food will reflect that. If I’m angry, I put more chilli in and you’ll still love it,” he say, probably half in jest.

While he talks about his dalliance with food, he also finds inspiration with folks from his past. There are recipes from his grandfather and Aunty Zainab and continues the tradition of bringing Singaporean dishes to the table.

For his second year, some of his earlier recipes have been given a breather as he fires up some new crackers.

The Prawn Sambal With Petai (pictured at the top) is based on a family recipe and combines the ingredients in a smooth blend of flavours. The Sotong Masak Sambal Belado presents tender squid in a sauce that is sharp and memorable. Talking about this dish and the belado brought on a discourse on how to make the sauce.

“One kilo chilli, one kilo tomatoes and one litre of peanut oil,” he explains. Then it’s hours of constant stirring. You cannot stop.

“My father said, when you want to cook, you cook. Don’t talk to your girlfriend,” added  D’Silva.

The Ikan Assam Surani is a delicate dish of baby thread fin in a sweet and sour gravy. This is long forgotten Peranakan recipe that calls for specific cutting methods for the ingredients. The shallots and turmeric are ground to a paste. “Use the mortar and pestle, don’t use the blender,” D’Silva chides.

The delicate flavours of the Opor Ayam  and the fried chicken add to the mix of new recipes that D’Silva feels will give regulars some new dishes to savour.

The Ambller Kacang With Belly Pork is a must try. The Eurasian dish with Malay influences has a spicy gravy and the fat in the pork adds a contrasting texture. Various textures are also found in the Sayur Lodeh, which has a mix of spices, coconut milk, jackfruit and sukun (breadfruit).

Dessert was a sweet white fungus and papaya soup. There are other cakes and sweeties on the menu, but this cool dish does a great job of refreshing the palate. And if you’re hoping to rock in and expect sugee cake, you’ll have to book it in advance since, as D’Silva explains, it doesn’t last very long and the ingredients are expensive.

I wish Folklore would serve good teh tarik and local coffee. The cafe culture with slick baristas and fancy machines that hiss and spit may be part of the new generation, but old school beverages still rock.

Empathy May Not Be Good — Keep It Going

For National Day, Folklore highlights a dish each from the various races as a tribute to the efforts of the migrants in helping build the country’s reputation.

The National Day menu is available at $30++ for two pax for weekday lunch, from 30 July to 31 August.

30 July – 3 August, Folklore serves Braised Pork Trotters with Mooi Choy, a dish with its roots  among the Chinese dialect groups. D’Silva opts for the Hakka style using star anise, cinnamon and brown cardamom, along with several other ingredients, cooked over a low flame. The mooi choy is cooked with pork fat, garlic, dried chillies and rock sugar.

6 – 10 August, and it’s time for the Nasi Minyak with Lamb Rendang And Sayur Lodeh to be showcased. D’Silva opts for lamb since “it’s more flavourful”, and the basmati rice is cooked in an aromatic mix of ghee, spices, almonds, raisins and chicken stock.

13 – 17 August should be a treat for those who like Dry Goat Curry with Biryani and Dhalcha. D’Silva’s grandfather’s recipe turns the gamey meat into tender succulent morsels in a rich gravy.

20 – 24 August brings to the table Nasi Ulam, a classic Peranakan dish which is prepared in a variety of ways and results in a dish of various hues. D’Silva’s version has wolf herring, prawns and herbs, and uses kaffir lime and turmeric leaves, along with a mix of other spices and seasoning.

27 – 31 August is time to slurp the Eurasian Birthday Noodles (pictured above), which features egg noodles with sliced pork tenderloin, prawns, bean sprouts, served in a pork and prawn broth.