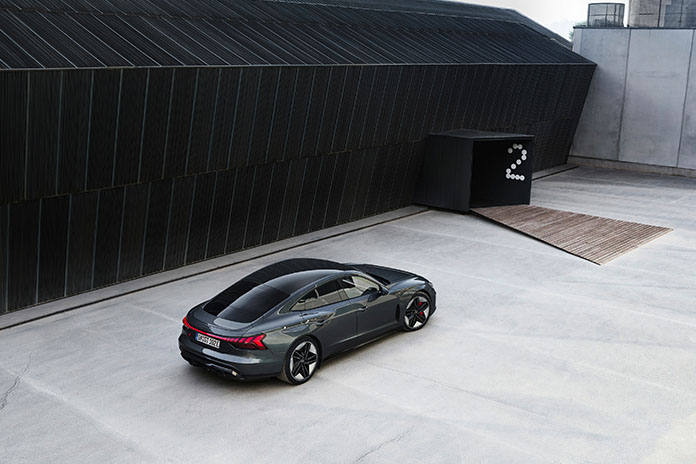 OUT to make an immediate impression, the Audi RS e-tron GT certainly delivers the goods.

What a stunning looker. The four-door grand tourer stretches out its profile and lowers its stance to look menacing, powerful and graceful in a display of evocative design.

Perched at the top of the tree of the e-tron electric vehicle range, this is a fast machine calculated to stir your emotions. Every groove and cut of the metal is purposeful and designed for effect. 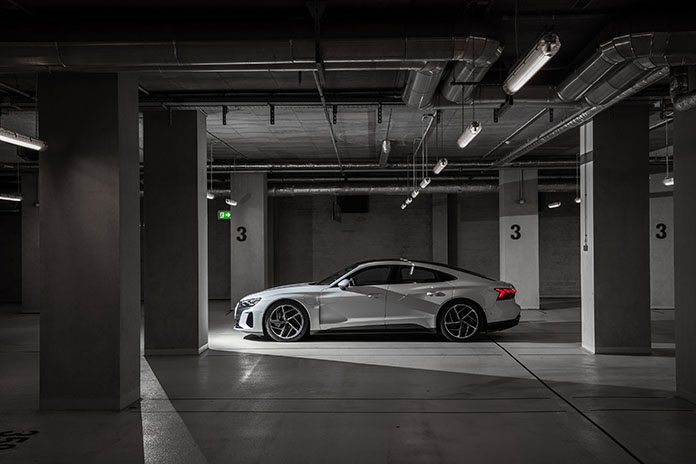 The laser lights in front and the unique lighting at the rear add to the overall racy feel of the car, along with the 21” aero blade wheels that come standard on this RS.

While BMW’s i8 sparked the imagination, it didn’t seem to progress much further during those early days of electric vehicles. But the EV narrative has progressed a lot further since then. 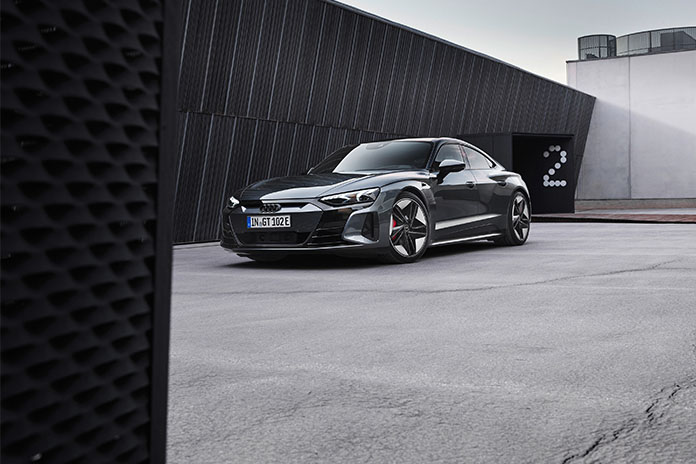 This near 5-metre RS e-tron GT could significantly change the attitude towards EVs; elevating it to a more desirable means of getting around…quite quickly (0-100kmh in 3.3 seconds)and at a significant enough price point — $640,000* — which means there won’t be that many on the road, ensuring some measure of exclusivity.

With its flat form — it stands just over 1.4m high — and active aerodynamics, including an adjustable rear spoiler and a flat belly, the RS e-tron GT boasts a coefficient of drag of 0.24, which makes it slippery smooth on the move.

With four doors in place, the RS e-tron GT is also a practical proposition. Admittedly, for a car of its length, the rear quarters are a bit tight, largely due to the sloping back that gives it a low and tapered look. But the panoramic glass roof is a convenient glass ceiling to let you look at the world through a tinted lens. It’s quite dramatic and almost mesmerising to watch a heavy rainfall, especially if you have the right music pumping through the Bang & Olufsen surround sound system. 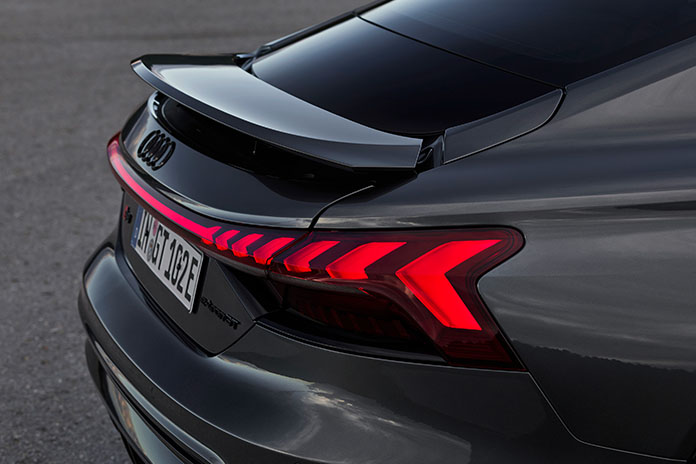 The shapely rear offers you ample boot space, accessible by kicking under the bumper to open and close the lid. Since there isn’t an engine, there’s also a small storage compartment in front.

Entering the RS e-tron GT requires some planning, squeezing and manoeuvring. I find it easiest to enter from a sitting position, then swinging my legs in while bending slightly to prevent my head getting whacked by the low roof. But once you’ve done this reverse birthing process you’ve got a wonderfully loving seat which hugs you, warms or cools you, and offers a firm or gentle massage. Would be nice to take this seat home. 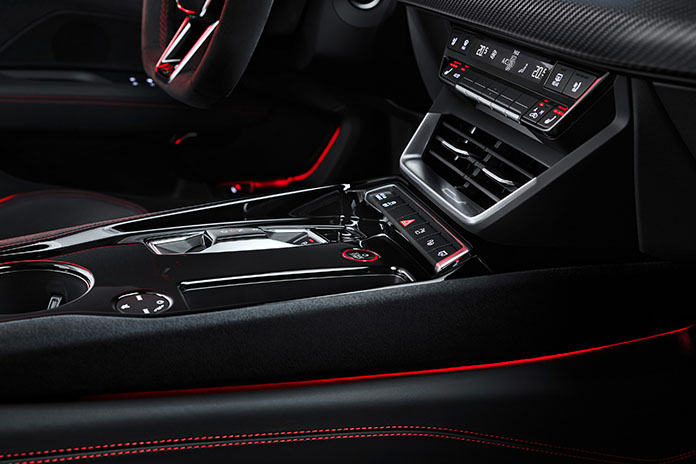 While it looks well built, on closer inspection, there are some odd bits jutting out that could be potential problem spots especially in the tropics. At either end of the dash, there is an angular protrusion which, on the driver’s side of the test car, was already starting to separate. Not sure why such an angular design feature is incorporated into the design. When you rap on various areas of the car — dashboard, doors, centre console — the sound is not reassuringly solid. It’s different tones of hollow knocks that you hear. Presumably that keeps the car lighter, at 2,347kg.

The reduction in knobs and buttons means you wind up with lots of shiny flat spaces on the dash and in the centre console. Large screens feed you information constantly. Tied to your smartphone, which is tucked away in the upright wireless charging tray out of sight in the centre armrest, Apple CarPlay and Android Auto allow you to use your familiar apps, or you can use the Audi Connect app for your infotainment and navigation needs. 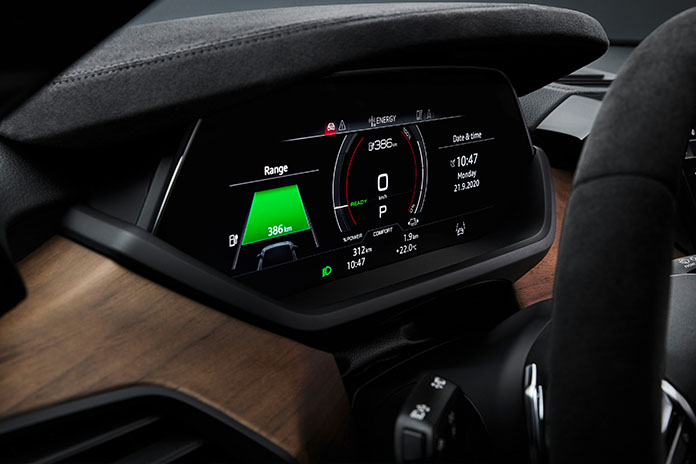 With an expanse of digital information at hand, the driver can use the responsive touchscreen to configure the ideal set up. Key information is  projected onto the head up display, and really the main one to watch is the speedometer.

When you can hit 100kmh in just over 3 seconds, you’ll need to watch your  right foot. Like all electric cars, there’s that instant torque, but instead of the accompanying eerie quiet as the scenery whizzes by like a silent video, Audi has added a sound akin to a jet engine; an effect that is pronounced when decelerating for some reason. 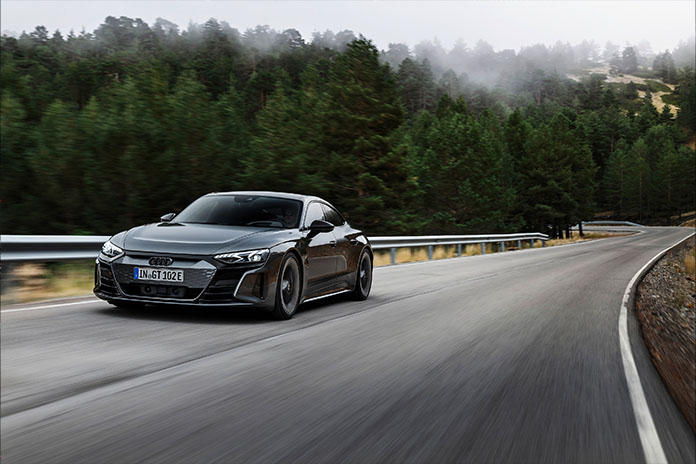 But it does add to the sense of drama as the RS e-tron GT glides effortlessly to its intended destination. The straight-line acceleration is smooth, and through some snaky manoeuvres it is confident and stable by virtue of its low stance, firm construction and Quattro all-wheel drive.

Given its length, you might wonder about how it handles tight spaces, but with all-wheel steering it’s smoothly through narrow spaces and U-turns.

The 440kW of power is delivered by two electric motors on both axles. The torque delivered is 830Nm which provides a lot of juice when required. 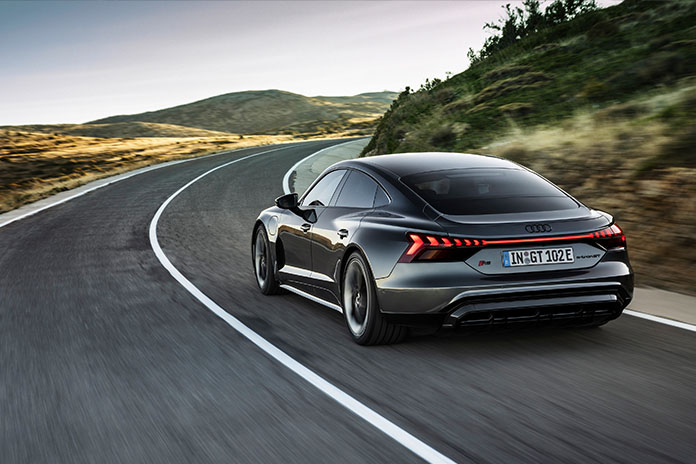 With a range of 488km, the RS e-tron GT can be DC charged for five minutes to deliver 100km, albeit in an ideal world, for now. The e-tron route planner, incorporated in the MMI navigation system helps to calculate the charging stops for the most convenient drive.

While it ticks the right boxes as far as being sustainable and friendly to the environment, the RS e-tron GT also ticks off that important box for engaging and enjoyable driving. 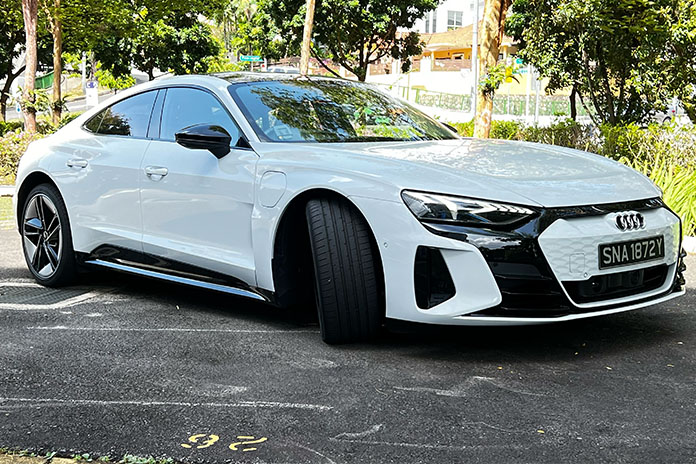